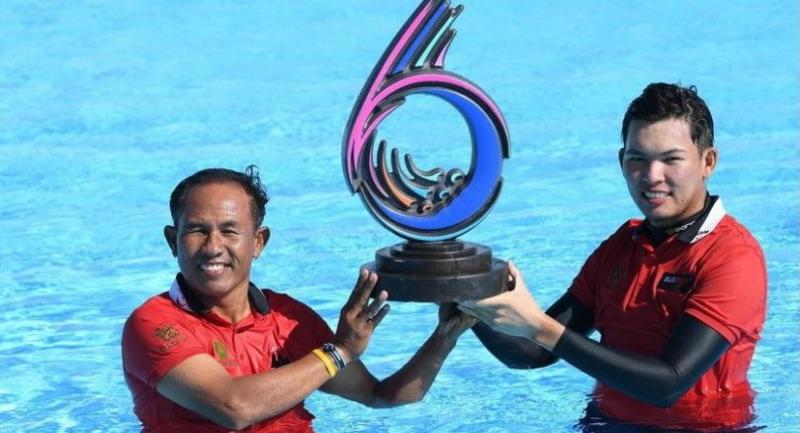 Thailand beat England in a nearest the pin play-off to win the GolfSixes Cascais and make European Tour history at Oitavos Dunes.

Phachara Khongwatmai and Thongchai Jaidee were tied at 1-1 after six holes in the final against Tom Lewis and Paul Waring, with another trip up the sixth unable to separate the teams.

That meant the innovative event would go down to nearest the pin in the final for the first time in its three year history, and it was Khongwatmai - 29 years his team-mate's junior at just 20 years old - who hit his tee shot to concession range to claim the win.

The sixth hole, with its tee shot over a swimming pool and party atmosphere has provided incredible scenes throughout the event, not least Jaidee's hole-in-one to eliminate Ireland in the group stages.

But even the 49-year-old, with 393 European Tour appearances and eight wins under his belt coming into this week, can never have experienced anything like these two days of six hole modified greensomes, which ended with the team-mates jumping into the pool to celebrate.

"I'm lucky today," said Jaidee.  "We played well today but I think the teamwork was very important. I'm very happy to win again. I never won in two, three years but now is a good time to win and thank you to my partner, Phachara."

Khongwatmai added: "It was really fun and really fun to play with Thongchai for Thailand. He taught me about the format of the game and I'm really happy to have Thongchai, so happy. "

After winning Group B on day one, Thailand beat Scotland and Spain to set up the clash with Group A winners England, who defeated Sweden and Italy in the knockout stages.

Waring went over the back of the green with England's approach to the first in the final and they could not get up and down, allowing Thailand to take an early lead with a routine par.

Both teams missed the green at the second and while both recovery shots were clumsy, a pair of two putts meant the hole was halved in bogeys.

Thailand beat Scotland 2-1 in the last eight as Khongwatmai gave them a perfect start when he nearly drove the first, while Jaidee's excellent tee shot on the third was enough in the semi-finals for a 1-0 win over Spain, who missed good birdie chances on the first and second.

England had jumped out into an early 2-0 lead against Alexander Björk and Joakim Lagergren in the quarter-finals before Björk grabbed a hole back with a stunning tee shot on the third.

The semi-final saw Italy bogey the first before Lewis hit a wonderful tee shot at the third and make a 15 foot birdie on the fifth in a 3-0 win.

Spaniards Jorge Campillo and Nacho Elvira needed just four holes to beat Italy in the third/fourth place play-off, making birdies thanks to wonderful iron shots on the first, third and fourth, while the second was halved in bogeys.

Italian pair Lorenzo Gagli and Edoardo Molinari had earlier beaten France in a nearest the pin play-off in the quarter-finals, while Spain were 2-1 winners over Australia in their last-eight contest.