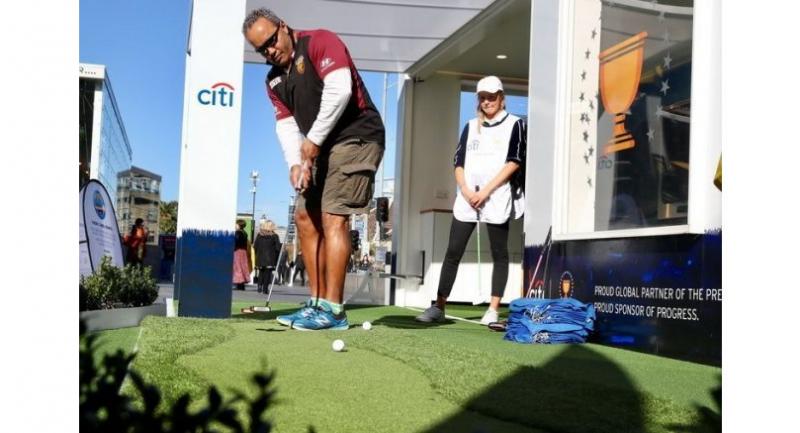 ​​​​​​​MELBOURNE, Australia and NEW YORK, United States – In celebration of the global impact of the Presidents Cup, tournament officials and Presidents Cup Global Partner Citi today announced the return of the Citi 44 Million Yard Challenge with a “Drive to Melbourne".

Once again, Citi is inviting everyone to collectively drive a golf ball 44 million yards – the length it takes to circle the globe – either in-person or virtually. This time, the Citi 44 Million Yard Challenge is aimed at supporting the launch of a First Tee chapter, to be managed by the PGA of Australia, at the 2019 Presidents Cup.

Ed Skyler, Global Head of Public Affairs at Citi said, “We are proud to again partner with the Presidents Cup and support the return of the Citi 44 Million Yard Challenge and the expansion of First Tee into Australia. We see golf as a platform that allows us to give back, and by supporting First Tee, we hope to provide opportunities to enrich the lives of young people around the world. The challenge also helps unite people around the world in pursuit of a common goal, reminding us in the process that the circumference of the globe is a mere 44 million yards!”

The Citi 44 Million Yard Challenge will feature a web-based game, a simulator, and a mobile game, allowing fans from all over the world to play and enjoy an interactive experience, while driving toward the opportunity to expand First Tee programs in Australia. The simulator will be placed in popular locations throughout Australia, and other select locations, to build excitement and increase awareness for the 2019 Presidents Cup, which will return to The Royal Melbourne Golf Club for a third time from 9-15 December, 2019. The full list of Simulator locations is still being determined but fans in Melbourne got a preview this past weekend, at popular Federation Square. The first location in the United States debuts today at Brookfield Place New York.

The Citi 44 Million Yard Challenge will drive toward a launch of First Tee programs in Australia later this year. Each year, First Tee (www.thefirsttee.org) provides education programs to young people throughout the United States on golf courses, in schools and at other youth-focused locations. The launch of a First Tee chapter in Australia will mark the organization’s sixth international location, including Canada, Japan, Korea, Morocco and Mexico. First Tee positively impacts the lives of young people through the game of golf by providing education programs that build character and instill life-enhancing values.

After winning his first PGA TOUR event in New Orleans in 2017, Australian Cameron Smith made a significant donation to a local First Tee Chapter in Florida. Along with the donation he wrote a note that read, “I remember being your age, hitting balls, dreaming of being on the world’s biggest stage and practicing making putts to win PGA TOUR tournaments… Without the nine core values, I wouldn’t be where I am today. Using these values each day, I strive to be a great person before a great golfer.”

Smith also recognized Citi for their efforts. “It’s great that Citi is not only launching this initiative to help bring awareness to the Presidents Cup, but First Tee will have a lasting legacy on the youth in Australia, not just as golfers, but to build overall life lessons and opportunities outside of the game.”

“We’re grateful to Presidents Cup, Citi and PGA of Australia for collaborating around the idea of bringing First Tee programs to young people in Australia as a part of 2019 Presidents Cup,” said First Tee President Greg McLaughlin. “While our programs have been in place in the U.S. for more than 22 years, I am pleased we are able to look for ways to strategically expand through relationships like this.”

Fans in select countries who play the Citi 44 Million Yard Challenge will be entered into a once-in-a-lifetime sweepstakes, with one (1) grand prize winner and one (1) first prize winner.

Grand Prize: Trip for two (2) to the 2019 Presidents Cup, which includes the following:

Tags:
Citi and Presidents Cup Announce the Return of the Citi 44 Million Yard Challenge and an Effort to Expand First Tee to Australia Citi Presidents Cup