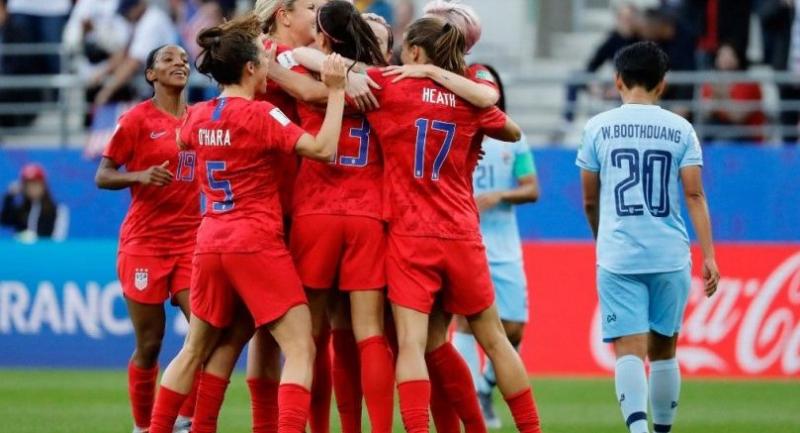 Holders the United States began their defence of the women's World Cup trophy in style on Tuesday as Alex Morgan scored five times in an incredible, record-setting 13-0 destruction of hapless Thailand in Reims. Ten of their goals came in the second half as the USA set a new mark for the biggest winning margin in a women's World Cup match, bettering Germany's 11-0 defeat of Argentina in 2007.

Rose Lavelle and Samantha Mewis netted twice each while Lindsey Horan, skipper Megan Rapinoe and substitutes Mallory Pugh and Carli Lloyd also found the net for the USA in an embarrassingly one-sided Group F encounter watched by a crowd of more than 18,000 at the Stade Auguste-Delaune.

The result also far outstrips the USA's own record result in a World Cup match, which had been their 7-0 defeat of Taiwan in the quarter-finals of the first tournament in 1991.

"We have to look at the group stage as every goal counts and it was important for us to continue to go," said Morgan.

She was the star of the show, with her five goals in one game equalling the record for a player in a World Cup match set by her compatriot Michelle Akers, and taking her to 106 in total for her country on her 164th appearance.

Morgan and her coach, Jill Ellis, dismissed suggestions that the manner of the victory was in any way disrespectful towards Thailand or embarrassing for the game.

"This is a world championship so every team that is here has been fantastic to get to this point. To be respectful to opponents is to play hard against opponents," said Ellis.

"A lot of this is about building momentum, so I don't find it my job to go and rein them in.

"I respect Thailand, I celebrate that they are here, I spoke to some of them afterwards and just said keep your heads up. This is part of the growth of the game."

Morgan had an effort disallowed for offside inside five minutes but quickly made up for that by nodding in a Kelley O'Hara cross, before Thai goalkeeper Sukanya Chor Charoenying -- standing at just 1.65m tall -- allowed Lavelle's shot to beat her at the near post.

Horan smashed in the third in the 32nd minute, but the floodgates really opened in the second half as Ellis's side scored four times in six minutes shortly after the restart.

Mewis bagged two either side of Morgan getting her second from close range, before Mewis squared for Lavelle to make it seven.

Only after that did the legendary Lloyd, scorer of a hat-trick in the 2015 final and now 36, come on.

There was a lull and it looked as if Thailand might avoid claiming an unwanted record, but the holders scored six more in the closing stages.

Morgan got three more to equal the record of Akers set in that game against Taiwan in 1991, while Rapinoe, Pugh and Lloyd joined in too as spectators struggled to keep up with the scoring.

The USA, who are aiming to win the trophy for the fourth time overall, now go to Paris where on Sunday they will face Chile, who lost 2-0 to Sweden earlier on Tuesday.