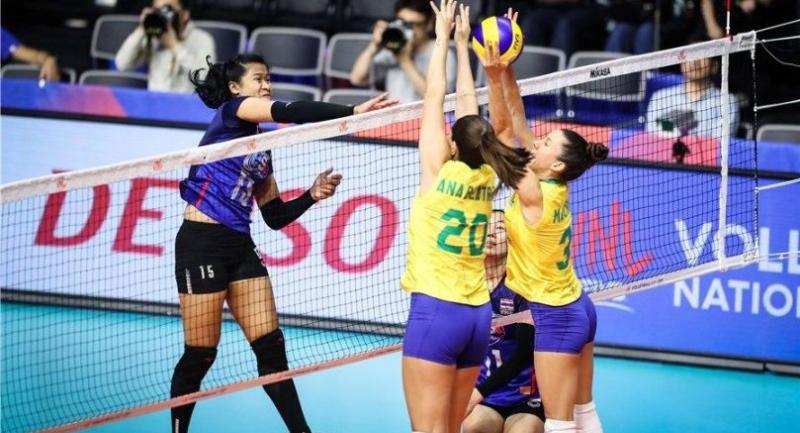 Malika Kanthong of Thailand, right, spikes to the Brazilian players.

Two-time Olympic gold medallists Brazil stamped their authority over Thailand, hammering the Kingdom 3-0 (25-19 25-17 25-21) in Pool 15 of Volleyball Nations League in Tokyo on Wednesday.

It took just 78 minutes for Brazil to post their 19th major competition win over and notch their eight win out of 11 matches in the League series.

It was, however, something of a fall to earth for the Thais, who upset world champion Serbia on Tuesday, but have now lost seven out of their 11 matches.

Thailand captain Nootsara Tomkom: "It was a very difficult game, as Brazil has very powerful spikes and high blocks."

Thailand coach Danai Sriwacharamaytakul: "Brazil was a very powerful team to play against. Especially their serves and blocks were very good. We were not able to play our style of volleyball. Their counter-attacks were very difficult to receive."

Brazil coach Jose Roberto Guimaraes: "Thailand has various types of combination plays and they are a very highly skilled offensive power. However, we were able to play stably and we were able to respond. I was very pleased to win and this is a very important win for us for the Final 6 round."

They will take on long-standing rivals Japan in their final round-robin game on Thursday, while Brazil will face Serbia.