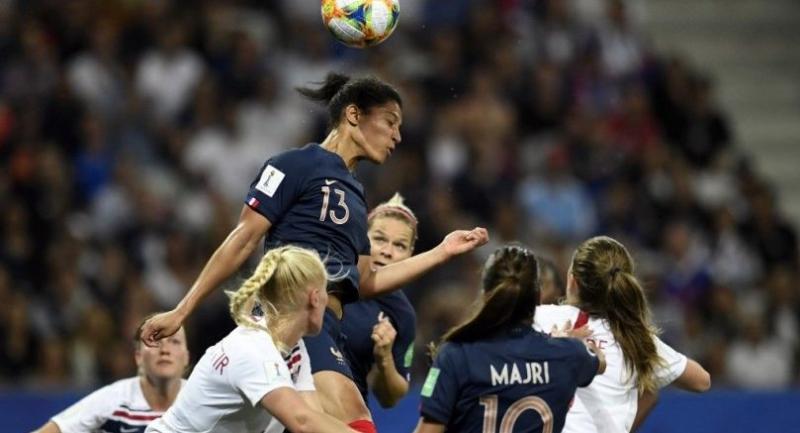 France's forward Valerie Gauvin (up) heads the ball during the France 2019 Women's World Cup Group A football match between France and Norway.

Eugenie Le Sommer fired Women's World Cup hosts France to the top of Group A after scoring the winning penalty to see off determined Norway on Wednesday, while Germany virtually assured themselves of missing the rampant United States in the last 16 after squeezing past Spain and taking control of Group B.

Lyon star Le Sommer fired home from the spot with 18 minutes left after referee Bibiana Steinhaus decided after a VAR review that Norway defender Ingrid Syrstad Engen had kicked Marion Torrent on the knee after making a hash of a clearance.

The 30-year-old's second goal of the tournament put France on a perfect six points after two games and saved the blushes of her club teammate Wendie Renard, who had cancelled out Valerie Gauvin's 46th-minute opener for 'Les Bleues' with a barely-believable own goal.

Renard, whose height and power had led to Norway using a similarly tall press officer to simulate her presence in the area for set-pieces in training, was visibly distraught after tapping Isabell Herlovsen's cross into her own net under no pressure.

"We didn't let our heads drop ... and we were rewarded with the penalty."

Le Sommer stepped up to save the points and put them to within a point of topping the group ahead of Monday's final match against Nigeria, who saw off South Korea 2-0 in Wednesday's early match thanks to a a comical own goal from Kim Do-yeon and a superb burst and finish from Asisat Oshoala.

France are three points ahead of both Nigeria and Norway, who now need to hold off South Korea to be sure of arriving AT the knockout stage.

Thomas Dennerby's Nigeria meanwhile are eyeing a first qualification to the knockout stage for 20 years after just their second World Cup win in that time.

The three points they have could well be enough to see the Super Falcons through as one of the four bes third place finishers, but Dennerby is targeting a result against France in Rennes on Monday to remove all doubt.

"France are a very good team, if we come out of that with one point we'll all be very happy," Dennerby added.

Earlier Germany brushed off the absence of injured star player Dzsenifer Marozsan as Sara Daebritz downed Spain to move her side top of their group.

Marozsan will miss at least the German's final group stage match against bottom side South Africa after breaking her toe in her side's opening 1-0 win over China, but Wednesday's hard-fought win means her lay-off should be less of a problem in the sort-term.

Paris Saint-Germain midfielder Daebritz made Germany strong favourites to top the group by pouncing three minutes before the break ahead of dithering Spain defender Marta Torrejon, who only had to clear the ball after her goalkeeper Sandra Panos did well to save Alexandra Popp's header.

They are three points clear of Spain and are one better on goal difference, meaning they need a point against bottom side South Africa on Monday to be completely sure of coming out on top.

That would leave whoever finished second below them to face the Americans, who were in ominous form on Tuesday as they racked up a record 13-0 win over Thailand, while the Germans would take on one of the four best third-placed finishers who will make the last 16.

"Our goal was always to win the group, and now we are on the way to doing so. We want to win our third game too," Daebritz told German broadcaster ZDF.

Asked by reporters if watching the USA dismantle Thailand was "extra motivation" for her side to win the group, a smiling Voss-Tecklenburg said "both teams knew they didn't want play the winners of Group F".

Second-placed Spain, who were wasteful despite dominating possession and will rue Nahikari Garcia somehow slicing wide when clean through in the 14th minute, should still qualify but face a trickier test against China on Monday.

They risk being caught by the Chinese or South Africa, who aim to boost their own qualification hopes on Thursday in Paris after losing their opening games.