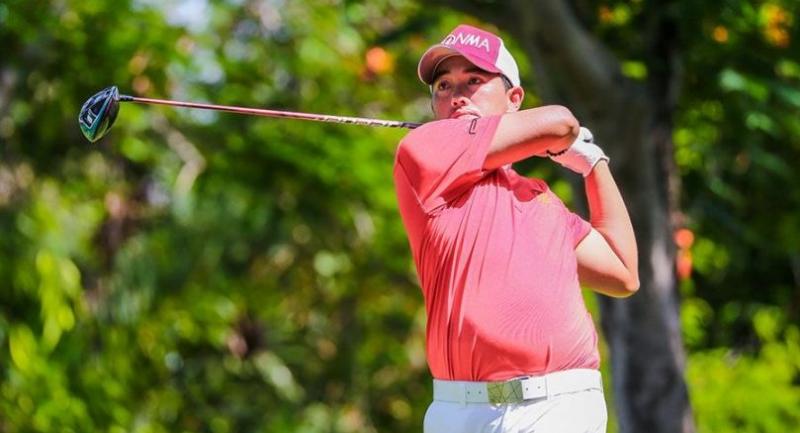 Nakjon Pathom - The in-form Kwanchai Tanin carded a solid 69 to capture a three stroke lead over South Korean rising star Johyung Kim after the third round of the Bt3 Billion Singha All Thailand Championship at Suwan Golf & Country Club on Saturday.

The 33 from Hua Hin, winner of All Thailand Golf Tour’s Chiang Mai Open in April, produced three birdies without a bogey to maintain the lead for the second day on 19 under-par-197 at the par 72 7,055 yard layout.

“I was a bit under pressure in the first four holes,” said Kwanchai who committed only one bogey from 54 holes. “I guess I’m not comfortable with being the leader,” added Kwanchai whose other ATGT victory came from the 2013 Pattaya Open.

With several young guns including Kim (200) and Poosit Supuppramai and Phachara Kongwatmai, each on 201, chasing after him, Kwanchai said he cannot underestimate these strong contenders who can shoot low score on any given day.

“I’m just 50 % confident about my chance in the final. Anyone can shoot seven to eight under and turn things around. I have to stick to my plan by hitting the fairways and remain focused,” added Kwanchai. Teen sensation Kim put himself in another good position to win on the ATGT after back-to-back second finishes in Phuket Open and Singha Classic in Nakhon Nayok over the course of four weeks.

“It was really windy at the back nine but I controlled well. My putt didn’t go in as much. Hopefully tomorrow my putts are going to drop it,” said Kim who spent most of his life outside Korea.

The teenager lost the three-way play-off to Miguel Carballo of Argentina in Phuket last month and to Sarit Suwannarat by a stroke in Nakhon Nayok two weeks ago.

“I would say a bit of luck. But at the same time I’ve been working hard,” the South Korean explained why he has been in such a great form.  “The last tournament I had good friends around to put me on the second place. Tomorrow I’m just three shots behind. Anything can happen on this golf course which is so scorable . if I can make fast move, things may go my way,” added Kim who just came to Thailand to join the ATGT last year.

“I grew up and lived in Australia for seven years and then in Philippines for six years. I think All Thailand Golf Tour is tough and the players are so good. So I came here to learn from them,” he added. A stroke behind at joint third was 20-year-old Phachara who just teamed up with Thongchai Jaidee to win the European Tour’s GolfSixes Cascais in Portugal last Saturday.

“There’s still a chance to catch up with the lead but I’d rather focus on my game plan. I’ve been playing a bit more solid now,” Phachara said.