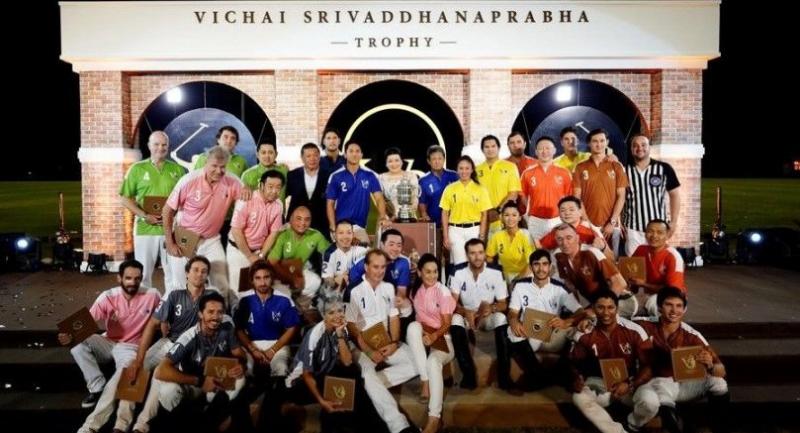 The late Vichai Srivaddhanaprabha - who pioneered and supported polo in Thailand, bringing it up to international standards - once said: “Whatever I do, I must do the best I can.” From this came the idea to bring polo to Thailand.

He said: “I used to ask myself whether I would really play polo? Could I play it at my age? The answer was that playing polo made me happy. It is different from football.

“With that sport, I watch football players and feel happy with them. With polo, I am playing and relying on myself and so the happiness comes from inside me.”

His love for the sport translated into a strong determination to establish the Thailand Polo Association. Thanks to his dedication, the sport became recognised in Thailand and developed to international standards.

Early in April, the association hosted a memorial competition the “Vichai Srivaddhanaprabha Trophy”.

The event featured an exhibition remembering Vichai through photos of unforgettable moments and polo games as well as his passion for the sport.

Also on display were trophies from various polo competitions including the first-prize trophy handed out for the Thailand Polo King's Cup, which was bestowed by His Majesty the late King Rama 9. The encouraging words he give to the national polo team after they won silver medals at the latest SEA Games were also on display. They read: "We made this competition the best. For the next game, we will win the gold medals".

Kanoksakdi Bhinsaeng, president of Thailand Polo Association, said that the Vichai Srivaddhanaprabha Trophy was organised for the first time this year in memory of Vichai, the founder and former president of the association.

Support and promotion of the sport came from Vichai who was passionate about the game and made it his mission to popularise polo both in Thailand and abroad.

In addition, Vichai also worked to develop the capabilities of Thai

polo players so that they were on a par with international players.

Vichai established the Thailand Polo Association in 1998 with the aim of having the sport included in the SEA Games.

The final round was held on April 7 at VS Sport Club, Bang Bo, Samut Prakarn Province.

Kanoksakdi Bhinsaeng presided over the opening of the final by throwing a polo ball to mark the start of the match between VS Blue team and VS Yellow team. They played four chukkas of seven minutes each. During half-time, spectators were invited on the field for the traditional "divot stomping", stamping on the divots that had been torn up by the horses’ hooves during the game and smoothing the surface of the field.

At the end of play, VS Blue team beat the VS Yellow team with a score of 8:6 and Aimon Srivaddhanaprabha, chairman of King Power International Group presented the prizes to all the players.

The Thailand Polo Association said it is proud to see international players coming together to carry on Vichai's dreams.

The event also served to gather those who love and are passionate about polo.

They experienced happy moments just as Vichai said: "Playing polo is spending time in the company of those you love.”