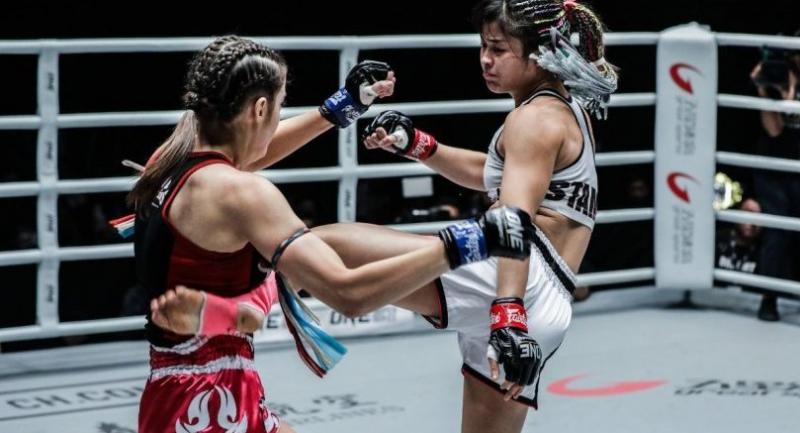 . ONE: LEGENDARY QUEST showcased the brightest stars in global martial arts. In the main event, reigning ONE Atomweight Muay Thai World Champion Stamp Fairtexretained her title with a unanimous decision victory over Alma Juniku of Australia.

In the main event of the evening, two-sport World Champion Stamp Fairtex of Thailand overcame a game effort from challenger Alma Juniku of Australia to retain her ONE Atomweight Muay Thai World Championship. The two women warriors battled through five action-packed rounds, trading spitfire combinations. Throughout the contest, it was Stamp who established her dominance, often getting the better of striking exchanges. In the end, all three judges scored the bout in favor of Stamp to win by unanimous decision.

In the co-main event, former ONE World Title challenger Agilan “Alligator” Thani of Malaysia spoiled the ONE Championship debut of Japanese legend Yoshihiro “Sexyama” Akiyama to win via unanimous decision. Thani showcased improved striking skills, pressing with a plethora of boxing combinations as Akiyama attempted to retreat to his elite judo. Thani also dominated the grappling sequences throughout the duration of the contest. After a gruelling three-round affair, all three judges scored the bout in favor of Thani.

In a ONE Super Series bantamweight kickboxing contest, local star “Muay Thai Boy” Zhang Chenglongscored a destructive one-punch knockout of Australia’s Tyler Hardcastle to notch a first round finish. Action started off furiously at the sound of the opening bell, with both men meeting at the center of the ONE Championship ring. After a few heated exchanges, Zhang exploded with a leaping uppercut, catching Hardcastle right on the chin as the Australian crashed to the canvas almost immediately.

In a ONE Super Series bantamweight Muay Thai contest, former ONE World Title challenger Han Zi Haoof China turned in a spectacular performance, stopping opponent Andrew “Maddog Fairtex” Miller of Scotland. It was an intense battle of attrition for the duration of the bout, as neither man was willing to take a step backward. Han turned the aggression up towards the end of the first round however, carrying momentum over into the second where he dropped Miller twice en route to the satisfying knockout win.

Rising featherweight contenders Koyomi “Moushigo” Matsushima of Japan and “Pretty Boy” Kwon Won Il of South Korea put together a spirited and competitive three-round battle to the delight of the passionate crowd. Although Kwon brought the punching power, Matushima showcased his superior wrestling skills, controlling the South Korean martial artist on the canvas for the majority of the contest. All three judges scored the bout in favor of the Japanese star to win by unanimous decision.

In a highly-competitive ONE Super Series kickboxing contest, light heavyweights Tarik “The Tank” Khbabez of Morocco and Anderson “Braddock” Silva of Brazil lit up the Baoshan Arena with an action-packed striking showcase. Through three gruelling rounds, the two kickboxing behemoths took each other’s best shots, unloading a series of thunderous combinations at the center of the ring. Neither was willing to take a step back and in the end, it was Khbabez who emerged victorious by unanimous decision.

Reinier “The Dutch Knight” De Ridder of The Netherlands retained his unblemished record, keeping his 100% finishing rate intact with another highlight-reel technical knockout, this time over Brazilian Gilberto “Giba” Galvao. It was all De Ridder from the sound of the opening bell, as the Dutchman was able to close the distance and establish his grappling dominance early. In the second round, De Ridder snatched Galvao’s head in a front headlock position and delivered a series of knees to force a verbal tapout.

In one of the most entertaining bouts of the night, Muay Thai World Champion Rodlek PK.Saenchaimuaythaigym announced his arrival to the ONE Super Series stage with a unanimous decision win over the United Kingdom’s Liam “Hitman” Harrison in a Muay Thai bout. Rodlek appeared to be unfazed as he walked through Harrison’s best shots and punished the Brit with stinging jabs and kicks of his own. Harrison picked up steam in the final round as he tried to rally back, but it was too late as Rodlek walked away with the dominant unanimous decision win.

“Rock Man” Chen Lei of China used a strong third round performance to seal a unanimous decision victory over Indonesia’s Anthony “The Archangel” Engelen to cap off the preliminary card. It was all Chen in the first round, as he took Engelen down with ease and maintained control with superior grappling. After getting rocked early, it was Engelen’s turn to showcase his grappling skills, as he managed to keep Chen down to keep the bout competitive. In the final round, the hometown favorite regained the momentum by once again taking the bout to the ground and controlling Engelen to earn the nod on all three judges’ scorecards.

“King Kong Warrior” Fan Rong put on an impressive display of grappling and striking as he overwhelmed Egypt’s Sherif “The Shark” Mohamed en route to a second round technical knockout victory. Mohamed came out swinging in the opening round, but Fan remained patient and timed a takedown perfectly and kept the action on the ground. In the second round, Fan again took Mohamed down and looked for the submission before eventually posturing up and punishing the Egyptian with some ground and pound for the stoppage win.

China’s own Niu Kang Kang picked up a big win on home soil as he defeated Filipino mixed martial arts veteran Eric “The Natural” Kelly by unanimous decision. Looking to snap a losing skid, Kelly came out aggressive and scored an early takedown, but on the ground however, it was Niu who was in control. Niu repeatedly threatened with submission attempts and kept Kelly grounded for the better part of the three-round contest. After 15 minutes of action, it was Niu who was declared the winner on all three judges’ scorecards.

“The Big Heart” Yoon Chang Min of South Korea remained undefeated in his mixed martial arts career after picking up a quick first-round technical knockout victory over Filipino Trestle “Jun Minion” Tan. Yoon brought the action to the ground almost immediately, but instead found himself in a submission attempt from the Filipino welterweight veteran. Yoon was able to power out of the submission and began to light Tan up with thunderous knees and precise punches to take the Filipino out and earn the highlight-reel stoppage.

Japanese newcomer Itsuki “Strong Heart Fighter” Hirata was spectacular in her ONE Championship debut as she steamrolled through the Philippines’ Angelie “D’Explorer” Sabanal by first round submission. Hirata used her crisp striking to keep Sabanal, a National Muay Thai Silver Medalist, at bay before eventually getting the takedown. On the mat, it was all Hirata as she maneuvered into a tight Americana armlock, leaving Sabanal with no choice but to tap out.

Myanmar’s Phoe “Bushido” Thaw put on an impressive display of dominance to kick off the preliminary card, defeating Indonesian Victorio “Indra” Senduk by knockout in the first round. Phoe Thaw stunned Senduk early and threatened to put a swift end to the bout with a rear naked choke submission attempt. Senduk survived but merely prolonged the inevitable, as Phoe Thaw finished the Indonesian off with strikes for the stoppage victory.

Official results for ONE: LEGENDARY QUEST