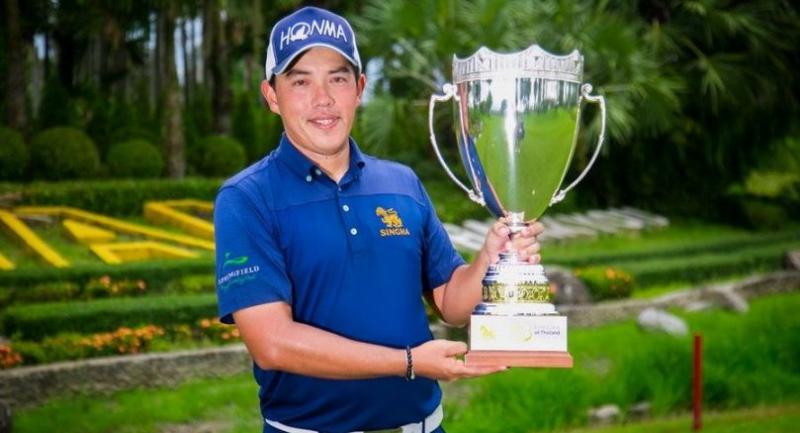 The 33-year-old from Prachuap Khiri Khan, despite some hiccups, kept his cool to shoot a 69, for a total 22 under-par-266 to snatch his second title this year after the Chiang Mai Open two months ago.

“I’m so happy because I never won two titles in one year before,” said Kwanchai, a nephew of golf legend Prayad Marksaeng.

“I was nervous at the beginning because several guys were chasing after me. But I tried to be patient and kept hitting the fairways,” added Kwanchai, who will return home Bt450,000 richer with the prize money.

Starting the round with a four-shot advantage, Kwanchai hit a double bogey on the sixth hole and a bogey on the 12th, narrowing his lead to just one ahead of Phachara Kongwatmai, who won the GolfSixes Cascais along with Thongchai Jaidee in Portugal last week.

But the 20-year-old endured back-to-back ending bogeys that saw him slip to third following a final-round 68 and a total 19 under-par-269 with Itthipat, who hit a low-score 65, surging to lone second on 20 under-par-269.

“I was a bit lucky that Phachara started missing on the last two holes. Experience really helped me today,” said Kwanchai, who admitted his uncle Prayad and his father at first had to force him to play golf. “It took me a while to start enjoying the sport.” Ittipat, who is the current No 1 on the Asian Development Tour, enjoyed his best result since he won the ATGT and ADT co-sanctioned Boonchu Runagkit Championship in January.

“I was a bit stunned to finish second because I was six behind the lead at the start. But I was playing pressure-free this week after having a holiday with my family to recharge my batteries,” said the 26-year-old from Nonthaburi Ittipat, who won Bt277,500 as runner-up.