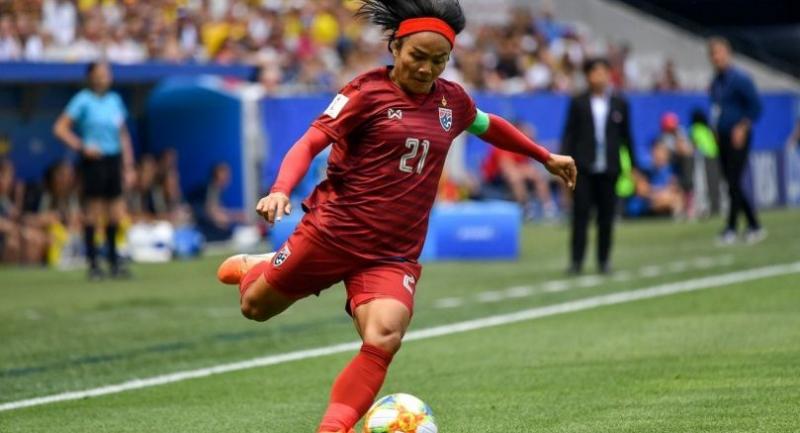 Skipper Kanjana Sung-ngoen gave Thailand’s women a moment to savour after the historic World Cup defeat by the US, scoring a late goal in Sunday’s 5-1 loss to world No 9 Sweden in their second Group F game in Nice.

Five days after the 13-0 capitulation at the hands of the defending champions, Thailand rose from the abyss with their first ever goal against a higher-ranked team in the World Cup.  Her Royal Highness Princess Sirivannavari, daughter of His Majesty King Maha Vajiralongkorn, was so moved by their efforts she called the players to tell them.

“I’m so overwhelmed to have scored the first goal for Thailand at this World Cup,” said the 32-year-old from Chon Buri. “It was not as tough as the game with the US, who didn’t allow us to gain any momentum.

“Sweden took their time but were more precise. We tried our best,” said Kanjana, who now has 17 goals in 58 caps since making her debut in 2009.

“To score a goal against one of the best teams in the world is so hard,” said coach Nuengrutai. “It shows that what we have been doing finally paid off. Even it was just one goal out of several chances, it made the whole team smile and feel happy.”

Nuengrutai said she couldn’t have asked her players to give any more, despite two heavy defeats and just the finale to come against Chile on Thursday. The team still has the most slender of opportunities to make the knockouts as one of four best third-placed teams.

Her players battled for the entire 90 minutes against Sweden and showed they weren’t at all intimidated against the former Cup runners-up. Despise being rank underdogs, their fighting spirit earned them widespread praise on social media from both Thai and foreign fans. “I’ve noticed that the players have improved a lot mentally. They were so determined to try to fix their weaknesses from the first game. They have no fear,” Nuengrutai said of her team.

One of the most ardent fans was Her Royal Highness Princess Sirivannavari who made video phone calls to show her support to the players before and after the game.

According to team manager Nualphan, the princess told the team: “We are a team of women. To have come this far, we have shown the pride of the Thai people. Even though we lost, this is the match that we must remember.”

Thailand, world-ranked 34, will Chile, who are two places below them, at 2am on Friday (Thailand time) and the match will be broadcast live on PPTV. Thailand will need a win – and a big win at that – to stand any chance of progressing but they will also need other results to go their way.

“As we lost a lot of goals in the first game, that will affect us if goal difference is taken into account. But we will give it a try. Anything can happen,” Nuengrutai said.