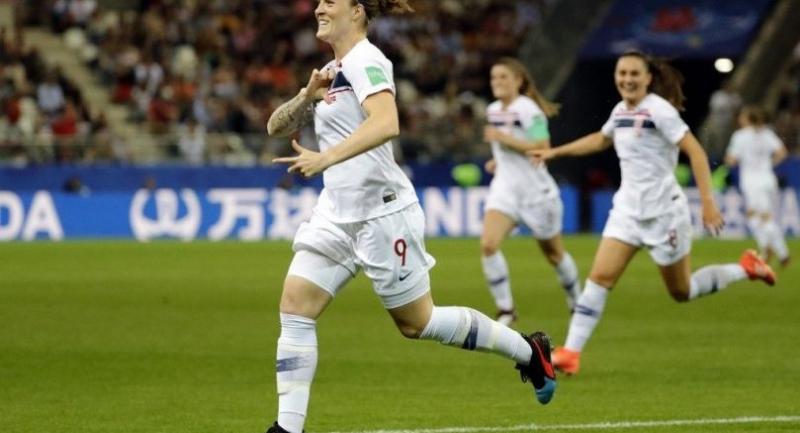 Norway went through to the last 16 of the Women's World Cup alongside China and Spain on Monday after beating South Korea 2-1, while France and Germany topped their groups with wins over Nigeria and South Africa.

Caroline Graham Hansen gave Norway an early lead from the spot after Cho So-hyun was judged to have grabbed Maria Thorisdottir in the third minute, before winning the decisive second penalty shortly after the break when she was chopped down by Kang Chae-rim.

The Barcelona attacker had to watch while she received treatment on the sidelines as Isabell Herlovsen just squeezed home Norway's second to secure the points from a nervy encounter and seal second place in Group A, despite Yeo Min-ji's poked finish 12 minutes from time.

Asked by reporters if she would be available to play in the next round, Hansen said: "I don't know yet, but the doctors are positive we'll be OK."

"The Koreans were better than we expected, but we were not good today so we're happy that we're through," she added.

They also survived a late scare from the impressive Koreans, who are nonetheless out after finishing bottom with no points, when Min-ji headed a fraction wide in stoppage time.

In the next round Martin Sjogren's side will take on one of Italy, Brazil or Australia, who go into the last round of group matches in Group C on Tuesday with first place and a potential two further last 16 places up for grabs.

"We'll have to see who we meet, but I think Italy have really impressed me," said Sjogren.

Outsiders Italy need just a point against Brazil to top the group while the Australians can snatch second place if they beat point-less bottom side Jamaica and the Brazilians -- in second level on three points with the Aussies -- fail to win.

France meanwhile will take on one of the four best third-placed finishers following their 1-0 win, but face the prospect of tackling defending champions the USA in the quarter-finals should the Americans as expected top Group F and win their subsequent last 16 tie.

The French needed a point to take first place in the group but Renard gave them all three from the spot at the second attempt, after Nigeria goalkeeper Chiamaka Nnadozie was judged to have encroached for Renard's first effort, which hit the post.

"I thought to myself 'this is not my day ...' (but) I took my responsibility and I decided to retake it," said Renard.

"In high level sport if you're not mentally prepared there's no point you being there."

Germany meanwhile ensured they missed the Americans in the next round after they topped Group B with a perfect nine points following a comprehensive 4-0 win over South Africa earlier on Monday.

It could instead be Spain, who qualify for the next round in second place behind the Germans after a goalless draw with also-through China, to play the world's best team.

Both the Spaniards and former runners-up China knew a point in Le Havre would take them through to the knockout phase from Group B, and they transpired to play out a stalemate.

Spain did threaten to take all three points late on, but China goalkeeper Peng Shimeng made key saves in the last 10 minutes, getting down low to keep out a Patri Guijarro strike and then reaching to tip over a Jennifer Hermoso effort.

China finished behind Spain on goal difference but will progress as one of the best third-place finishers.

Former world champions Germany had no trouble dispensing with South Africa in Montpellier, as the Banyana Banyana go home from their first World Cup without a point thanks to goals from Melanie Leupolz, Sara Daebritz, Alexandra Popp and Lina Magull.

Germany go into a last-16 tie on Saturday in Grenoble against an as yet unknown third-place finisher from another group.

Spain will play in Reims on June 24 against either the United States or Sweden, while China must wait to find out which group winner they will come up against.