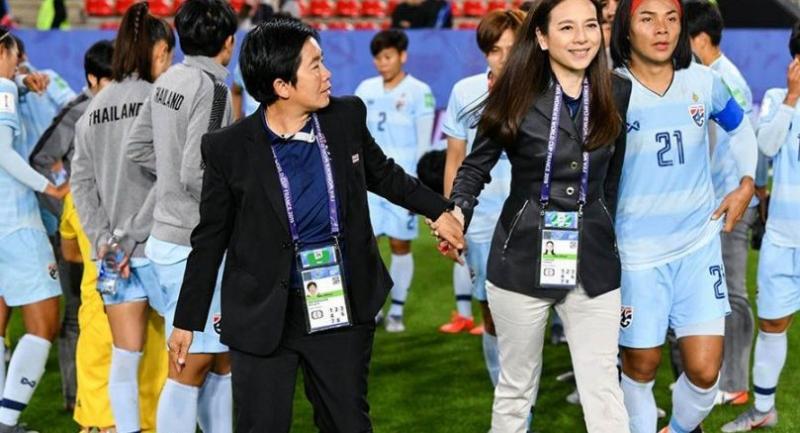 Coach and manager quit as World Cup exit is confirmed. The future of women’s football in Thailand has been thrown into doubt after coach Nuengrutai Srathongvian and team benefactor Nualphan Lamsam quit their jobs in the wake of the World Cup exit in Rennes on Friday (Thailand time).

The two key figures in the women’s game announced their resignations after Thailand lost 2-0 to Chile in their third and last Group F game.

The Chaba Kaew entered the match knowing they were already out of the tournament, their slimmest of hopes snuffed having been earlier snuffed out by Cameroon’s last-gasp 2-1 win over New Zealand in Group E.

Only a draw between those the two countries, followed by a Thai win over Chile, would have sent the Kingdom into the round of 16.

The Thai women are coming home on the back of three straight losses: the record 13-0 mauling at the hands of the USA, the reigning champions, 5-1 to Sweden and 2-0 to Chile. Four years ago in Canada, they did at least muster one victory, 3-2 over Ivory Coast, combined with 4-0 defeats by Norway and Germany.

“We were unable to improve our results from the last World Cup. We have to accept that the other teams in our group were better than us,” said Nuengrutai, 47, who has coached the team since 2014.

“We were pushed to the limit in every game, which was so tough. We don’t have many female football players [in Thailand]. With several restrictions, it’s hard for us to keep going.”

Nuengrutai and Nualphan had made a deal some time ago that if they helped Thailand qualify for the World Cup for the second time, they would leave the team afterwards, no matter how well they performed in France.

Nuengrutai said she would return to work for a sports school in Khon Kaen, while team manager Nualphan said: “Being the manager of the women’s football team for 12 years has been the highlight of my career. The coach and I have already agreed that we will leave our roles. Thank you to all the players for the hard work and for their support.”

The departure of the two leading lights leaves a big question mark over the women’s – Nuengrutai led Thailand to consecutive World Cup Finals and Nualphan had always been the team’s main financial backer.

She is the president and chief executive of Muang Thai Insurance, which has been the main sponsor of the women’s team but whose contract with the Football Association of Thailand ends in December.

“I hope that the government and the private sector will pay more attention to women’s football as it can also build the country’s reputation,” Nualphan said.

“We still see a big gap between the women’s team and men’s team, which has a lot more support.”