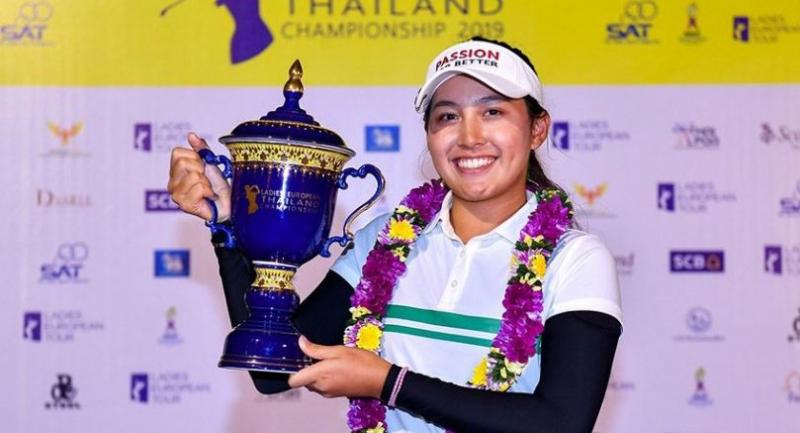 PATTAYA - A NEW RECORD was pinned at the Ladies European Thailand Championship when Atthaya Thitikul became the youngest player to win twice on the LET following a convincing five shot victory at the Phoenix Gold Golf and Country Club yesterday. Atthaya with her father and grandfather

Downpours suspended play for almost three hours but they were unable to stop the red-hot teenager from carding a final-round 67 for a four-day tournament record of 22-under-par 266, beating German Esther Henseleit into second on 271. “I’m so happy with the result and all the things I have done in the tournament. It’s so unreal,” said Atthaya who had to stop play after three holes due to rain. “I tried to keep concentrated during the rain break. Anything could happen after the rain but I knew if I stuck to the game plan, I could still make it,” added the schoolgirl who had made only one bogey since Friday.

“After I won the last time, I have been working hard and keeping my mindset positive. Before the tournament, my life was up and down. Winning today really gives me confidence back,” said Atthaya who is not eligible for the 45,000 euro prize money due to her amateur status. But she earned berths into the British Open and Evian Championship from the win.

"It's nice to set record," she added. "But it doesn't guarantee how I will do in the future."

Starting the round eight shots behind, Henseliet closed the gap to six with an eagle on the second hole and to five with a birdie on the fifth after the rain break.

But the Thai produced some excellent approach shots and fired three successive birdies from holes seven to nine to stride to 20 under with the German falling far behind with 14 under. The Thai kept the momentum going and never looked back. Ranked third on the LET Order of Merit, Henseliet closed with a 64 on 17-under-par 271, five off the lead. Once again she had to settle for second place after the Omega Dubai Moonlight Classic and La Reserva de Sotogrande in Spain this year.

“I played well today but obviously Atthaya was playing so great and didn’t give me a chance to get close to her, said the 20-year-old rookie from Hamburg . “I hope that I will finally win my first title next month or within this year,” added the German whose compensation was the top-prize cheque. Her compatriot Olivia Cowan, a 23-year-old from Hamburg and No 8 on the LET Order of Merit, hit 70 for a total 11-under-par 277 to finish in lone third with Norwegian Tonje Daffinrud and Marianne Skarpnord sharing fourth place on 279.

Chiang Mai-based Nattagate Nimitpongkul, making her first cut here, shot a 68 and a total 280 for tied sixth along with Hannah Burke of England and American Beth Allen. Defending champion Kanyalak Preedasuttijit was at tied 13th on 285.

Meanwhile, organisers Wangson Image Company have renewed the contract with LET to organise the tournament until 2023.