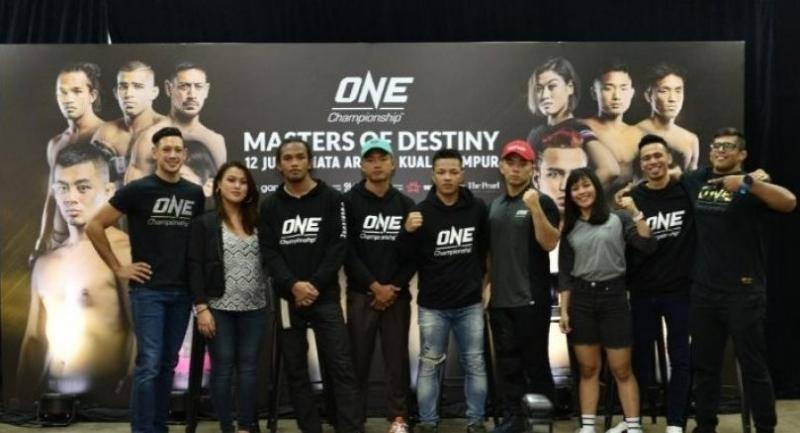 The event, held at UPPERCASE @ APW Bangsar, gave select media a chance to interact with ONE Championship athletes, some of whom are competing at ONE: MASTERS OF DESTINY, which takes place 12 July at the Axiata Arena.

Ev Ting, ONE Athlete, who will be competing against Daichi Abe at ONE: MASTERS OF DESTINY  stated: “Throughout my career, the support Malaysian fans have given me has been invaluable. I am so proud to represent our beautiful country on the biggest global stage of martial arts competition. Malaysia has some of the best martial arts talent in the world, and I take great pride in being counted among them. Each time I step into the ONE Circle, I bring that same pride with me onto the battlefield. I will always do my best to bring glory and honor to Malaysia, to New Zealand, and to the sport of martial arts. I will do my best to champion martial arts and its values in every battlefield.”

Saiful Merican, ONE Athlete, who will be facing Mohammed bin Mahmoud at ONE: MASTERS OF DESTINY stated: “I was born and raised as a true Malaysian. Malaysia is my home and I will do my best to represent my country to the best of my abilities. I may be taking on a fellow Malaysian in my next fight, but we are going to put on an absolute show for all the fans out there. I think by the end of the night, people are going to know what true Malaysian warriors are all about.”

Mohammed bin Mahmoud, ONE Athlete, who will be up against Saiful Merican at ONE: MASTERS OF DESTINY stated: “When I go out there and perform, I go all out. I give it my everything because the Malaysian fans deserve it. I wouldn’t be here without the fans, and I owe a lot to them. My next fight is going to be an all-Malaysian spectacle and fans will surely not want to miss it. My time on the ONE Championship stage has been incredible for my career and I’m getting better everyday. My ultimate goal in my career is to become a World Champion and make my country proud.”

Jihin Radzuan, ONE Athlete, who will be contesting Jomary Torres at ONE: MASTERS OF DESTINY stated: “It’s one thing to represent women’s mixed martial arts in Asia, but to do the same for Malaysia, it’s a huge responsibility. All throughout the country, there are young girls who have big dreams -- whether that’s in martial arts or in another field altogether. My goal is to inspire all the fans to chase their dreams because nothing is impossible when you pour your heart and soul into it. I’m looking forward to my match with Filipino’s Jomary Torres and I will do my best to emerge victorious.”

Agilan Thani, victorious against Yoshihiro Akiyama at ONE: LEGENDARY QUEST, stated: “It was a great experience competing in China and against such a legendary martial artist such as [Yoshihiro] Akiyama. Now, I have to keep my head down and work even harder for my upcoming contests in ONE Championship. I hope to slowly make my way back up the charts and hopefully contend for the ONE World Title again soon. I know I have a long road ahead of me, but I’m confident I’ve developed my skills and gained the experience necessary to make another run at the championship.”