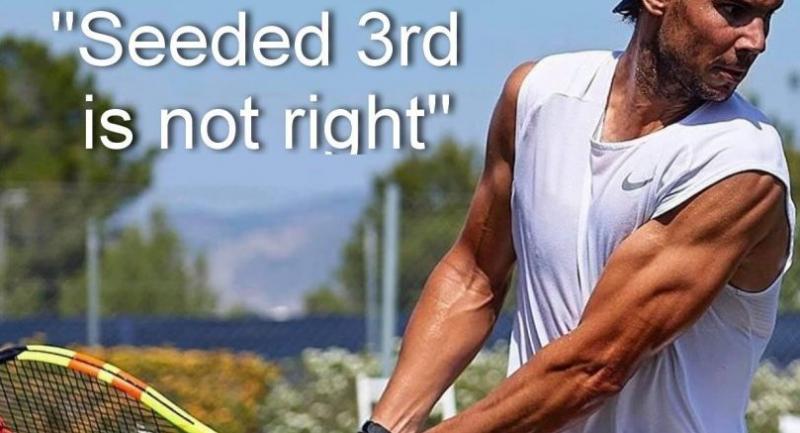 Rafael Nadal has complained about Wimbledon's seeding system after the Spaniard was placed at number three, behind Roger Federer, for next week's grand slam in London.

The other three major tournaments all match their seeding to the official world rankings but Wimbledon uses its own formula to dictate the order, combining ranking points with form in grass-court competitions.

It means Nadal will be seeded three and Federer two at the All England Club this year, despite their positions being the reverse in the rankings list.

"Wimbledon is the only tournament of the year that does it like this," Nadal told Spanish television channel Movistar on Monday night.

"Obviously it would be better to be two than three but if they think I have to be three I will accept three and fight to win the matches I have to win.

"Having said that, the only thing that doesn't seem right about this issue is that it is only Wimbledon that does it. If they all did it, it would seem more correct.

"It's not only about my particular case. There have been many occasions when players have played well all year on all surfaces but Wimbledon does not respect the ranking they have earned.

"And for this reason they get more complicated draws."

Nadal is yet to play an official match on grass this year while Federer warmed up for Wimbledon last week by winning his 10th title at the grass-court tournament in Halle.

Federer and top seed Novak Djokovic will be at opposite ends of the Wimbledon draw, separated until the final, but Nadal is guaranteed to have either Federer or Djokovic in his half, and could meet them in the semis.

"For me personally, it means if I am three, to get to the final, Djokovic or Federer will be in my half," Nadal added.

"But that can only happen in the semi-finals and to get there I have to win five matches. Today I'm far away."

Nadal claimed his 18th major title earlier this month by winning the French Open for a record-extending 12th time. He now sits behind only Federer's 20 grand slam triumphs in the all-time list of male champions.