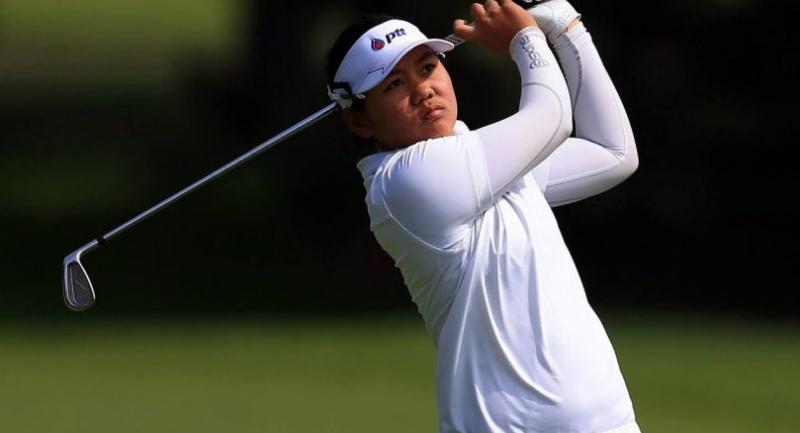 ​​​​​​​Thailand’s Sherman Santiwiwatthanaphong hurt her shoulder during the practice round and the pain caused her to change her approach to the first round of the 2019 Walmart NW Arkansas Championship presented by P&G, relying on her putter because she could not hit as long.

She then went out Friday morning and shot 10 birdies en route to an 8-under 63 at the Walmart NWA Championship, the best 18-hole score of her three-year LPGA Tour career. She is one shot behind former world No 1 Inbee Park

“I just tried to hit, like, fairway, green, and my putter was working,” said Sherman. “Even long putt I'm not as good to get in, it dropped. I was like ‘Okay, thank you.’”

Sherman said the round boosted her confidence in her play, aided by her support system. “The friends around me, they just say ‘keep practicing.’ Like last week I was practice round with Eun-Hee [Ji], and she was like, ‘Yeah, you hit it pretty good,’ and I said yeah, and she said keep practicing. And my family is just like, ‘Whatever happens, happens.’”

Santiwiwatthanaphong said her strategy tomorrow is to try and play the same as today. “I can sleep in, because I like to sleep,” she said. “Just get up and play. Try to enjoy it.”

INBEE PARK LEADS BY ONE AT THE WALMART NWA CHAMPIONSHIP

Inbee Park made a charge in Round 1 to lead by one through 18 holes, shooting a bogey-free 9-under 62 in the first round. The 19-time LPGA winner went out in 29 on the back nine with six birdies (five consecutive birdies on Nos. 11 through 15) and came back in 33 with three birdies.

“I was able to hole good putts, and I was controlling the irons really good, I had good distances today, and there was not many in between numbers as well, so it was nice,” said Park after making 26 putts in the first round. “I have played this golf course so many times, so it helps me playing through this week, and I love playing this golf course.”

Just one shot behind Park at -8 is a trio of players: Paula Creamer, Sherman Santiwiwatthanaphong and Carlota Ciganda shooting 63s – their best rounds of the season; Santiwiwatthonaphong bested her lowest round of her career by two strokes, while Ciganda tied her season best score.

Three players are tied for fifth at -7 including Ariya Jutanguarn, Annie Park and Maria Torres while defending champion Nasa Hataoka finished at T8 with four other players after carding a 6-under 65.

QUEEN INBEE’S GOT HER SHORT GAME BACK

Inbee Park lit up the back nine at Pinnacle Country Club on Friday, going out in 29 with five consecutive birdies on Nos. 11 through 15 and birdieing No. 18. Park was on track to become the second female professional to break 60, joining Annika Sorenstam but fell short by three strokes, still making birdie on holes No. 1, 3 and 7 for a bogey-free first-round 62.

“I think pretty much after the front 9, that 59 was on the watch,” said Park, who is one stroke in the lead going into the second round. “But I tried to make as many birdies as possible on the front nine, but it's playing tougher with a few tees moved back, and I had a couple of opportunities missed, but I think I still played really good out there today.”

Park self-professes that her putter hasn’t been hot in recent years but today’s round showed otherwise – she made just 12 putts on the back nine and 14 on the front.

“For a couple of years or so I have been missing a lot of short putts that really I wasn't really getting used to that, and I don't want to get used to that at all,” said Park who is currently ranked 39th on Tour in putts per round. “I was just trying to be patient and trying to wait for the day that's to come. I know I have a good feel on the putter, and it just wasn't going in the last couple of years or so. I was really waiting for this moment and hopefully I can keep this going.”

The 30-year-old from Republic of Korea is searching for her 20th win on the LPGA Tour and she is $4,995 shy of reaching the $15 million mark in career earnings.

Thirty-two-year-old Paula Creamer carded an 8-under 63 on Friday, going out in 29 with six birdies and coming back on the front nine with four birdies and a bogey on the par-3 6th. Creamer is making her 10th start of the Walmart NWA Championship but it isn’t her experience around Pinnacle Country Club that helped her make a hot start, it was the work of her team this season.

“My team, we've been working hard on my golf, and it was awesome to go out today and give everybody a pat on the back and say, ‘okay we're heading in the right direction’ today,” said Creamer. “I've been working a lot on my putting and it seems to be paying off.  My short game has been pretty good these last several months but driving the ball and giving myself the opportunities is something we have been really trying to clean up. It was a little bit messy there for a while and now I feel like we have it under control, so that's a big bonus for us.”

Creamer has had a difficult season, missing six cuts in her 10 starts leading up to the week in Rogers, Ark. Her first-round 63 is three strokes better than her previous best at Pinnacle Country Club and the 10-time LPGA winner doesn’t plan on letting up any steam heading into the weekend.

“I want to keep the pedal down. I know I’m playing well—just to feel that, trust myself, trust my instincts and believe I can do it,” said Paula confidently. “I’ll play early tomorrow so hopefully keep that momentum going.”

Three Arkansas Razorbacks returned to the Pinnacle Golf Club and played for the first time at the Walmart NWA Championship as professionals: Maria Fassi, Alana Uriell and Kaylee Benton. After the first round, all three were ecstatic to be back in front of the community as they continue their pro journeys.

“It's very exciting to come back home now as a professional. I mean, to see my people and to see everyone who supports the Razorbacks, it's very exciting and they're as happy as I am to be here,” said Fassi.

“It’s been what I’ve been looking forward to since I got my card honestly. It’s really great to have the support of my Razorbacks and be out here on a course that feels pretty normal for me,” said Uriell.

“It was really fun,” said Benton. “It was a little bit more similar to amateur golf than I thought it was going to be. I didn't really change my mind set the at all, had fun with Shauna [Taylor] on the bag and had a good time with my group. Overall, it was fun.”

Gaby Lopez sits atop the Razorback leaderboard at -4 while Stacy Lewis is close behind -3. Fassi shot a first round 70, with Uriell and Benton finishing with a 71. Amateur Dylan Kim ended the first round 7-over par.

As temperatures rose at the Pinnacle Golf Club, so did Carlota Ciganda’s birdie count. Ciganda sank three in her first three holes, then added six more during the first round to finish one stroke shy of leaderInbee Park at -8. The Spaniard only needed 26 putts to get it done, and hit 16 of 18 greens.

“I think in the mornings the greens are nicer because not many people have played, you can roll the ball better, so I think you have to shoot a low one in the morning.  In the afternoon you have to be more patient, the wind picks up more,” said Ciganda. “You can shoot a low score here, lots of birdies, and we will see what happens tomorrow.”

Ciganda’s 63 tied her career-best 18-hole score, the third time she recorded this season. It is also the lowest she has gone after one round in her Walmart NW Arkansas Championship history.

Teeing off tomorrow at 12:59 p.m., Ciganda hopes to keep her putter hot during the second round. “It will be tough to do something the same, because I made a lot of putts, and not every day you make lots of putts,” said Ciganda. “What I'm going to try to do is I hit 16 greens today, so I think if I hit 16 greens tomorrow, I will have a chance on Sunday.”