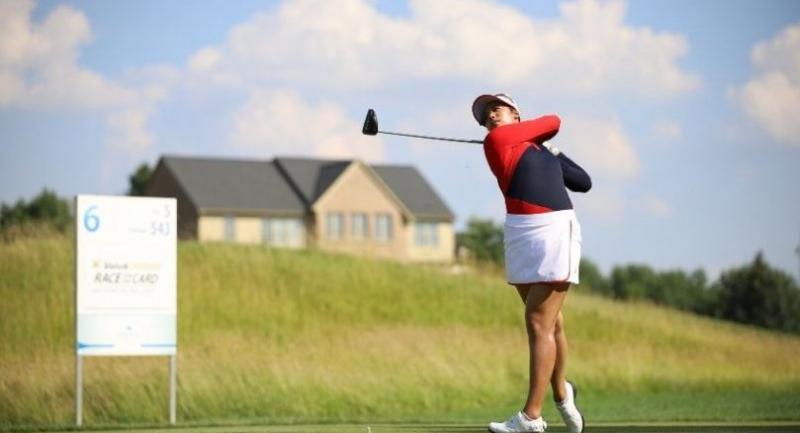 NCLA sophomore Patty Tavatanakit has signed with IMG following her second-place finish in the Prasco Charity Championship at TPC River’s Bend on Sunday. The 19-year-old rising star, a former world No 2 amateur, shot a final round of 72 to sit seven shots behind French winner Perrine Delacour after the final of the Symetra Tour event, her first attempt on the tour.

Right after the tournament, IMG announced the signing on social media, writing: ”Delighted to be working with former world No 2 amateur. Patty Tavatanakit was AJGA 2016 Rolex Junior Player of the Year.”

The Symetra Tour rookie, Patty, formerly known as Paphangkorn, fired a total eight under-par-208 for lone second, which earned her the runner-up’s prize money of US$11,946 (Bt365,000).

“I think my mental game was pretty good today and I feel good about my game with where it’s at,” said Tavatanakit, who ended tied for 14th in her Symetra Tour debut at the Island Resort Championship. “I would say my up and downs were solid; it was a pretty good round out here. I managed not to shoot over par and I’m pretty proud of that.”

Instead of taking the week off to rest, she heads to Oneida, Wisconsin, for the Thornberry Creek LPGA Classic. It’ll mark Tavatanakit’s second career start on the LPGA Tour after making her professional debut at the US Women’s Open earlier this month.

“I have to be excited, but was actually kind of looking forward to my week off,” Tavatanakit said. “I guess it is a good opportunity to play and gain experience on the big Tour. Hopefully I can learn again next week and shape my game for upcoming events on the Symetra Tour.”

Meanwhile, when the calendar flipped to June 1 this year, Perrine Delacour from France was still searching for that elusive first professional win. She need search no longer, as on the last day of the month, she is a two-time champion after a five-stroke victory.

“It feels awesome, I played really good the entire month and glad to get the second win,” said Delacour, who fired a 5-under par 67 in the final round to finish at 15-under overall. “It’s kind of the same feeling, but a little nicer to give me that confidence to finish the rest of the season. I’m going to try and get a third one because really I’m starting to get used to the moment.”

“Actually, I still can’t believe it,” Delacour said. “Seven top 10s and five top fives. I played really good golf and am looking forward to enjoying a week off. I’ve been playing for eight weeks in a row. I’ll enjoy then keep going in French Lick.”

VOLVIK RACE FOR THE CARD STANDINGS AFTER WEEK THIRTEEN

Following the 13th tournament of the 2019 Symetra Tour season, the Volvik Race for the Card welcomes a fresh top-10.

The victory and $18,750 winner’s check move Delacour up one spot to No. 1, having earned $96,878 across 12 starts this season. Here is a look at the current top-10 heading into the third annual Donald Ross Classic at the Donald Ross Course of French Lick Resort in French Lick, Ind. from July 11-13: