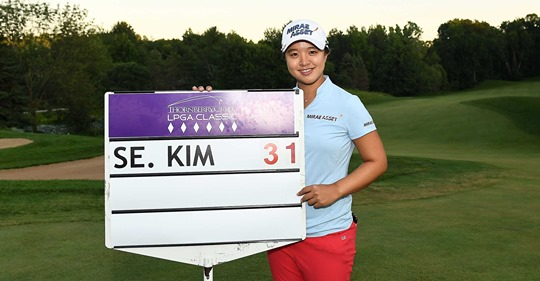 This week, the LPGA Tour returns to Oneida, Wis., for the third edition of the Thornberry Creek LPGA Classic.

WHAT YOU NEED TO KNOW ABOUT THE THORNBERRY CREEK LPGA CLASSIC

Flashback to 2018 - Sei Young Kim entered the final round of the Thornberry Creek LPGA Classic with three shots separating her from her idol Annika Sorenstam’s 72-hole scoring record. After recording 31 birdies and one eagle at the tournament, Kim’s dominating performance smashed Sorenstam’s record and earned her the victory in Wisconsin.

Kim, who had already tied the record at the 2016 Bank of Hope Founders Cup, said breaking that mark was the most memorable part of the tournament. “It's a really big deal because I want to set a goal, one thing very special. I want to break a record and I did last year. In 2016, I shot 27-under; almost break the record, but, yeah, tie,” said Kim. “After a couple years maybe I could be break record. After I did I'm very happy and then, yeah, pleased.”

Kim said one of the keys to her success last year was staying collected during each round. “Last year I was focused on what I have to do, and then very calm,” said Kim. “I made a lot of birdies. Before that round if I make the birdie I'm little excited or if I make the bogey I'm pretty upset. But I try to control my emotion last year and that works.”

The No. 12 player in the Rolex Rankings, Kim enters the week with a win under her belt this year at the LPGA MEDIHEAL Championship. She said she is ready for the chance to be the second consecutive winner at Thornberry. “When I got [to Thornberry Creek] people were saying, ‘You going to break up 31-under?’ A lot asked me. I answer that could be, but it's not easy. But trying to,” said Kim. “However, I don't think about what I did last year. Just keep doing it what I need to and then what I have to do.”

Sung Hyun Park comes to Thornberry Creek riding a wave of confidence. The 25-year-old Korean birdied the final hole to win last week’s Walmart NW Arkansas Championship for her second win of the 2019 season. That birdie also jumped her to No. 1 in the Rolex Women’s World Rankings for the fourth time in her professional career.

“It definitely is difficult winning twice in a row. I have done it in Korea but it has been very difficult and I have not won twice in a row in the States yet,” said Park. “But I do definitely want to win again. I'll try to stay focused as much as possible this week.”

This is the second consecutive year that Park comes to the Thornberry Creek LPGA Classic having won the previous week. In 2018, she won the KPMG Women’s PGA Championship but despite the low scores that peppered Thornberry Creek, she could do no better than +1 and a missed cut. Fast forward a year and Park has a much better finish firmly in her sights.

“To be honest, last year I wasn't really -- I didn't really know much about the course,” said Park. “I missed a lot of tee shots and there were lots of small mistakes I made. This year I'll try to, during practice with my caddie, get to know the course better.”

Sei Young Kim opens her title defense at 8:14 a.m. off the 10th tee, playing alongside Ariya Jutanugarn and Caroline Masson

World No. 1 Sung Hyun Park tees off at 8:36 a.m., joined on the first tee by Jodi Ewart Shadoff and Madelene Sagstrom

2017 Thornberry Creek champion Katherine Kirk will tee off at 8:36 a.m. at No. 10, playing with Na Yeon Choi and Megan Khang

RACE TO THE CME GLOBE UPDATE

The 2019 season brings a fresh face to the Race to the CME Globe. LPGA Members will accumulate points at each official LPGA Tour event leading up to the CME Group Tour Championship. The top 60 points earners and ties will then earn a spot in the CME Group Tour Championship, with the entire field competing for the $5 million purse and the $1.5 million winner’s check, the largest single prize in the history of women’s golf.