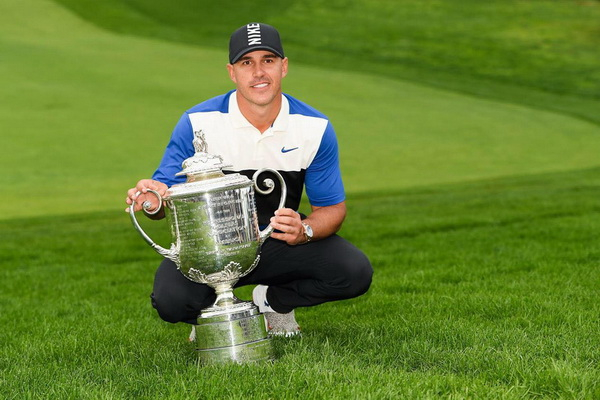 Brooks Koepka, the World No 1 and defending champion, has confirmed he will defend his title at The CJ Cup @ Nine Bridges, the only PGA Tour event staged in South Korea, in October.

Tournament title sponsor, CJ Group, announced the American star, who is a six-time PGA Tour winner, will tee up for the tournament’s third edition at The Club at Nine Bridges on Jeju island from October 17 to 20.

Koepka said: “I am excited to participate in The CJ Cup once again. I was awed by the excellence of The Club at Nine Bridges golf course when I visited Jeju island last year. I will try my best to gain a second consecutive victory at the upcoming tournament.”

Last year, the 29-year-old, who arrived for the tournament as the PGA Tour’s Player of the Year, carded a stunning back-nine 7-under 29 in the final round to earn his fifth career PGA Tour victory with a score of 21-under 267

That win enabled him to claim the No 1 position on the Official World Golf Ranking for the first time in his career.

Among his six PGA Tour titles are four major championship victories. In May, Koepka won the PGA Championship and he has finished runner-up at the Masters Tournament and the US Open as well this season. With two wins and four top-10s in the 2018-19 PGA Tour season, he currently lies in second place on the FedEx Cup points list.

But Koepka went beyond showcasing great golf last year during the week in Jeju island. He also showed off his fishing skills by catching a 51-centimetre yellow sea perch in Jeju before the tournament.

CJ Group said they were looking forward to welcoming Koepka back, adding that further announcements on the field will be made. The Group said they are also planning to greatly enhance the tournament experience so that golf fans to experience world-class golf in South Korea.

With 100 days to go tickets for The CJ Cup will go on sale from Tuesday on its official website, www.thecjcup.com. Early-bird ticket sales and promotions are also available at the CJ Mall, www.cjmall.com/THECJCUP. Last year, more than 40,000 fans visited The Club at Nine Bridges during the second edition of The CJ Cup.