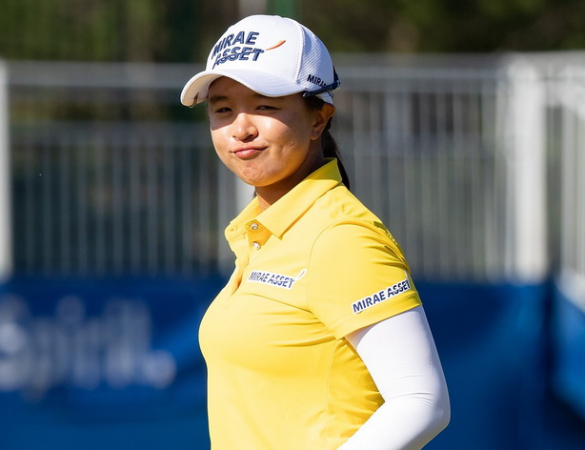 Republic of Korea’s Sei Young Kim fired the round of the day on Friday during the second round of the 2019 Marathon Classic presented by Dana.

KIM SURGES TO THE TOP AFTER TWO ROUNDS IN OHIO

Kim narrowly missed her putt for eagle on 18 but tapped in a birdie to post a bogey-free 64 and head into the weekend with a one-shot lead at 11-under par over her countrywoman Jeongeun Lee6(-10). A trio of Americans head into the third round tied for third at 9-under par, major champions Stacy Lewis and Lexi Thompson and 2019 LPGA rookie Jennifer Kupcho.

After finishing outside the top-40 in her last two starts, Kim was not expecting to play this well in Sylvania, Ohio. “Not really, because my play wasn't good the last two weeks,” Kim said, when asked if she had high expectations this week. “I'm just trying to do my best this week. So, yeah, I'm very happy with the good result than I expected.”

After Lee6 missed her first cut of her rookie season, the 2019 U.S. Women’s Open champion is back firing on all cylinders in her debut at the Marathon Classic. “I kind of wanted to play consistently as well, play well as much as I can. You know, especially the greens, like it's not too soft, not too firm, and I think I can control the shots and I think I can play well tomorrow.”

Toledo native, Lewis’ 36-hole 133 is her career-best mark in 12 prior starts at the Marathon Classic and she is looking forward to being in the hunt. “I probably didn't play as good today but managed it really good,” Lewis said of her third-round 68. “Couple near the lead, so I'm excited about the way I'm playing. Looking forward to the hot weather weekend.”

REST IS KEY TO THOMPSON’S SUCCESS

Top-ranked American Lexi Thompson returned to the LPGA Tour this week after a two-week break. Thompson played five weeks in a row prior to the much-needed time off, she said the first week she completely put away her clubs and focused on resting before amping back up her practice last week.

This week in her sixth appearance at the Marathon Classic, the well-rested Thompson is off to a fast start as the 11-time LPGA winner will head into the weekend at 9-under par, two shots behind leader Sei Young Kim.

“I like to think it's the hard work I've put into it,” Thompson said of her 66-67 start. “I've been working extremely hard just on my game in general. At the same time, off the golf course I've been trying to be a normal 24-year old, relaxing and having fun with friends and family and making sure I get that down time. It's very much needed, and I think that's helped my overall mindset on and off the golf courses.”

While she hits more 3-woods than drivers, Thompson said she loves the challenge Highland Meadows Golf Club presents off the tee and the fan support outside of the ropes.

“That's one thing I always say coming here to Toledo. You always get a great fan base, and that's what we want. We want to grow the game and see women's golf grow. It's great to see.”

It’s been a year of firsts for 2019 LPGA rookie Jennifer Kupcho, but this week is a different story at the Marathon Classic presented by Dana. As the 2018 NCAA Individual Champion, Kupcho earned an exemption into the 2018 event where she took full advantage of her opportunity as she finished a career-best T16.

This week, Kupcho returns to Highland Meadows Golf Club making her sixth start as an LPGA Member and her past experience has paid off as she heads into the weekend at 9-under par and tied for third.

“I love this course,” Kupcho said. “Even walking in the practice rounds I just looked at it and I was like, Wow, I love being here. It's just a great place, and I really like being able to come out here and be like, Oh, I know where everything, where the driving range and everything like that is. It's just more of a comfort thing for me.”

The inaugural Augusta National Women’s Amateur champion tied her career-best round of 66 on Friday and said she’s finally seeing her game come together.

“I'm hitting the ball really good this week, reading the putts well, and putting good rolls on them. Obviously walking off 17 and 18, two par-5s to finish you expect to get at least one. Left 17 short and just pushed 18's putt. It's a little upsetting, but it's exciting to see that I can do it and hopefully play well tomorrow.”

This week the LPGA Tour is at the eighth event of a 12-week stretch this summer and players are feeling it. Carlota Ciganda arrived at Highland Meadows Golf Club on Tuesday and was not feeling up to par but still managed to pull off a first-round 66 and then followed up with a second-round 68 on Friday. Ciganda heads into the third round at -8, just three strokes off Sei Young Kim’s lead.

“To be honest, I was really tired starting on Tuesday, and I pulled out of the pro-am because when I woke I had a headache and I wasn't feeling very good,” said the 29-year-old Spaniard. “But then I was like just try your best. I had no expectations yesterday, just to try to play my best. Yesterday I just started very well hitting like 70, 80%; today the same.”

Ciganda is playing in her fourth consecutive event and has played seven of the last eight weeks with a top-10 finish and a top-15 finish in her last two starts, including a T6 finish at the Walmart NW Arkansas Championship presented by P&G and a T15 at the Thornberry Creek LPGA Classic.

“To be honest, I didn't think I was going to play very good this week. It's golf, and I think I didn't think too much about the results so I'm happy to be where I am. I'm just happy to play and post a good number,” said Ciganda.

Through the second round in Sylvania the following players would punch their tickets to the major championship: Jennifer Kupcho, Youngin Chun, Christina Kim, Cheyenne Knight and Tiffany Joh.

Pannarat Thanapolboonyaras made a hole-in-one on No. 8 from 122 yards using a 9-iron on Friday at the Marathon Classic. There are now 18 aces recorded this season and a total of $360,000 raised thus far.