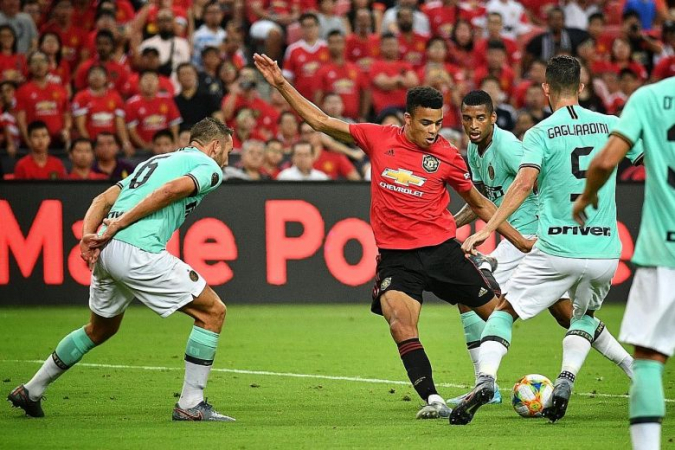 Manchester United's 17-year-old forward Mason Greenwood is surrounded by Inter Milan players as he attempts a shot during their match at the National Stadium yesterday./ST photo: Chong Jun Liang

"Ole, ole, ole, ole," the famous tune echoed in a sea of red under the floodlights at the National Stadium last night.

While the chant has historically been associated with the Singapore national team, especially during the heady days of the Malaysia Cup, they were last night directed at Manchester United, who beat Inter Milan 1-0 in the International Champions Cup.

United manager Ole Gunnar Solskjaer acknowledged as much, and said: "Today (the stadium) was Old Trafford, it felt like we were at home. The supporters have been amazing since we've been here."

Indeed, Kallang proved to be the Theatre of Dreams for the over 52,000 who packed the stands, as they got to see some of the planet's most popular football stars strut their stuff, but it was a future world-beater that made the biggest impression on them in the end.

Mason Greenwood turns 18 only in October but the youngster was the toast of United and the crowd, most of whom were United fans, after he fired a brilliant 76th-minute winner.

Solskjaer will soon find it difficult to keep the club's latest wonderkid wrapped in cotton wool. The Norwegian admitted: "The kid's only 17 and he's learning every day, training with these boys and in the last few months, he has grown in confidence and in stature.

"When you have players who perform, it's hard to keep them out, but we have to keep our feet on the ground.

"He's only 17, he'll have his ups and downs, but he's enjoying his football."

With the likes of Anthony Martial and Marcus Rashford firing blanks, it was teenager Greenwood - introduced in the 62nd minute - who delivered when he deftly skipped inside Inter midfielder Joao Mario and lashed home an unstoppable shot past Samir Handanovic.

The strike sent the 52,897 crowd into a frenzy. After all, they had watched their team dominate the game almost from the start, only to be let down by a lack of precision in the final third.

Greenwood almost grabbed a second just four minutes later when he got on the end of 19-year-old Dutch winger Tahith Chong's cross, but the woodwork came to Inter's rescue.

Greenwood's performance had radio personality Glenn Ong, 49, waxing lyrical, saying: "Yes, look out for Mason this season! This boy is hungry for success and Ole will certainly need someone like him especially since players like (Jesse) Lingard and Martial are firing blanks.

"Overall it was a fun match to watch and an awesome treat for United fans."

It was perhaps a treat for Solskjaer too. While they did not have their scoring boots on, Martial, Rashford and Lingard all put in bright performances, and worked tirelessly pressing from the front.

The polarising Paul Pogba showed glimpses of his incredible skill, while young defender Axel Tuanzebe was indefatigable at the heart of defence.

The action stretched to the stands when, at half-time, a woman successfully proposed to her boyfriend.

It was new signing Aaron Wan-Bissaka, however, who received the most cheers - the £45 million (S$76.5 million) man put in a solid display defensively and was also impressive going forward.

The stadium rumbled some 10 minutes before the end, when the Kallang Wave broke out with the fans in a celebratory mood.

Amid the fever-pitch atmosphere, match referee G. Letchman remained cool despite having to handle the millionaire footballers.

The 29-year-old Certis Cisco fitness trainer said: "They may be stars, but as referees, we have to give respect to all players, no matter what level the football they play."

The night was somewhat marred by the audible jeering from a large number of the United fans directed at Ashley Young every time he was on the ball, but Solskjaer brushed aside the issue by praising the 34-year-old as a "loyal servant" to United and a "professional" who would not be affected by the jeers.

Young, however, looked upset as he marched past the assembled media at the mixed zone and went straight onto the waiting team bus.

There was also an intriguing exchange at the final whistle between Inter Milan coach Antonio Conte and United's injured Belgian striker Romelu Lukaku, whom the Italian has openly coveted.

While he lamented how his team had much to improve, Conte chuckled when asked about his chat with Lukaku, saying: "He's highly regarded in my mind, and we had a few words because he recently had a child, but what was said remains between us."