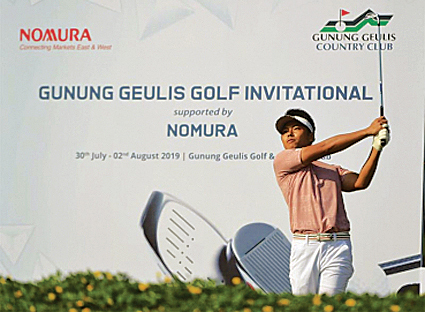 A blistering back nine 31 highlighted by five birdies in-a-row saw Japan’s Naoki Sekito romp to a massive eight-shot lead following the penultimate round of the US$75,000 Gunung Geulis Golf Invitational supported by Nomura on Thursday.

Sekito, who had held the lead since the opening round, never let anyone come close to him as he marked the day’s lowest round with a six-under-par 64 and extended his dominance atop the leaderboard to a 17-under-par 193 total at the Gunung Geulis Golf and Country Club.

The 21-year-old Sekito started his round in style by draining a 30-footer for birdie on the par-four first hole. He would make another birdie on seven and drop a shot on nine before setting the back nine on fire with five straight birdies from the 10th hole.

“I got off to a good start today and that boosted my confidence heading into the round. I actually hit a bad second shot so I was really happy to make that long birdie putt on that hole,” said Sekito, the current Asian Development Tour (ADT) Order of Merit leader.

“I don’t want to think about winning just yet. My target is to finish 20-under-par. It’s been a great season for me so far. I will continue to do the same for tomorrow and we will see how it goes,” added Sekito, who had set a new course record with his opening 62 before carding a 67 to seize a four-shot lead heading into the third round.

Sekito took advantage of his impeccable short game which sparked his hot run with a tap-in birdie on 10th and an eight-footer downhill birdie putt on 11th before chipping it close to set up another birdie on the 12th hole.

Sekito, who is chasing for his second ADT title, found the green in two shots on the par-five 13th hole before making two putts for birdie. He would go on to roll a 10-footer in for his fifth consecutive birdie on the par-four 14th hole.

After turning professional at the start of 2018, Sekito attempted to secure his Asian Tour card at the Qualifying School but an unsuccessful bid saw him switch his focus to the ADT, where he missed only three cuts in 13 starts and notched a top-five result.

Sekito endured another futile attempt at the 2019 Qualifying School but an invite to the PGM UMW ADT Championship in March turned his career around as he capped a commendable joint runner-up finish in what was his first start on the ADT this season.

He would extend his fine form to the PGM ADT Penang Championship in April where he claimed a one-shot victory for his first ADT title and the Butra Heidelberg Cement Brunei Championships the following week, where he finished solo second.

Sekito continued to taste success on the region’s secondary circuit as he notched another tied-second place finish in Malaysia last month to take over the Order of Merit lead from Thailand’s Itthipat Buranatanyarat.