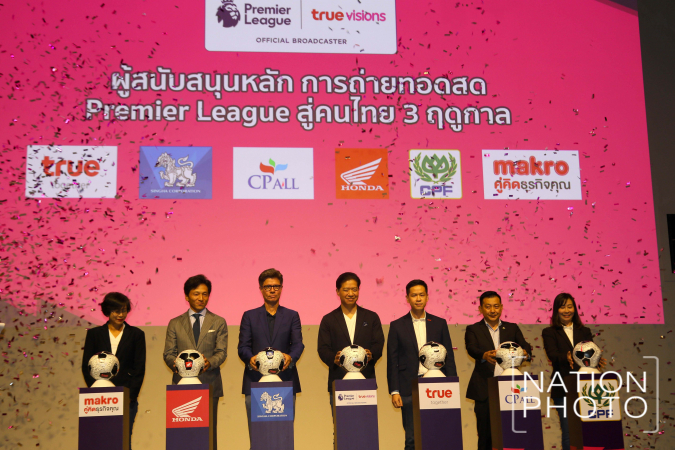 English Premier League (EPL) fans in Thailand will have the privilege of enjoying all 380 matches over the next three seasons, starting with the Liverpool-Norwich City game this Saturday, on TrueVisions.

In partnership with True Corporation, Singha Corporation, CP All, AP Honda, CPF and Siam Makro, TrueVision Group has confirmed that fans can watch all 380 matches of the English top flight league in the 2019-20, 2020-21 and 2021-22 seasons through their cable and satellite-operated channels.

Apart from watching matches through TrueVisions channels, fans can enjoy online activities, TrueSport networks and marketing campaigns as well as entertainment activities run throughout the country by the main sponsors.

“I can assure that this season, the fans will be extremely happy and excited watching the games. It will serve as a great experience for fans,” said Birathon Kasemsri, chief content and media officer of True Corporation, at a press conference on Wednesday.

“As the only network in Thailand to get the broadcast rights for live coverage of 380 matches [three seasons] and online broadcast including reruns and highlights through many platforms, I am sure the demands of the people and fans wishing to enjoy the coverage in different platforms at any time will be responded,” Birathon added.

Under the Omni Channel concept, fans can watch the coverage across many platforms including TrueVisions, True Premier Football HD, Truesport and TrueID Box. Moreover, the matches can be watched on the website or an application on smartphones.

A whole host of marketing campaigns will be conducted throughout the country during the next three seasons. Additionally, the More Extra Value package will be rolled out for the fans who want to get promotional prices.

The English Premier League 2019-20 season will kick off on August 9 when reigning European champions Liverpool host Norwich City at Anfield.

On August 10, Manchester City will start their campaign to become the first team to win the Premier League title for three consecutive seasons by taking on West Ham United in London.