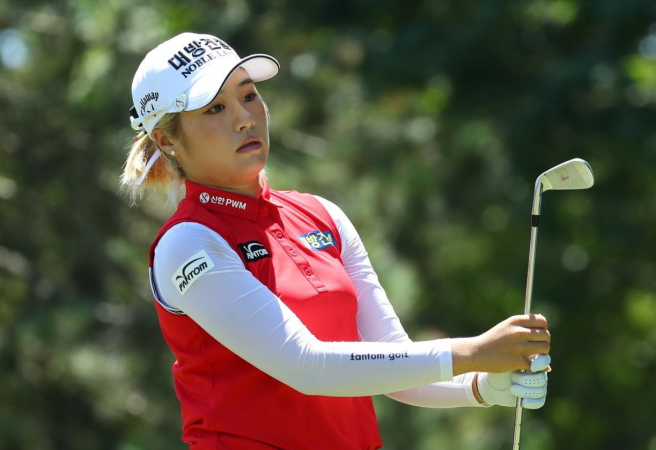 2019 LPGA rookie Jeongeun Lee6 is making her first start at the Aberdeen Standard Investments Ladies Scottish Open this week, and since she has never played on a links course her caddie, Graeme Courts, gave her advice to not worry about the weather and to enjoy the challenge.

Lee6 did admit she’s feeling a bit tired this week as she is set to make her 10th start in the last 12 weeks.

“It's been kind of hard lately because I've been playing so many tournaments in a row,” Lee6, who has four top-10 finishes in her last nine starts, said. “My condition is all right, but you know, I'm going to try my best as I can this week and play well.”

After missing just her second cut in 16 starts of the 2019 season at The Evian Championship, Lee6 went searching for inspiration. She found it just across Lake Geneva at the Olympic Museum in Lausanne, which she said reaffirmed her dedication towards her goal of making the Republic of Korea’s team in 2020.

As for her goals for the immediate future? After making her maiden LPGA victory a major win at the 2019 U.S. Women’s Open, Lee6 has set her sights on consistent play for the rest of the year.

“So my goal right now, I don't want to miss a cut the rest of the tournaments. And I'd like to win another tournament.”

Lee6 will tee off the first round in Scotland at 7:55 a.m. off the 10th tee along with fellow major champions Ariya Jutanugarn and Georgia Hall.

The Aberdeen Standard Investments marks the final qualifying event before the 2019 European Solheim Cup team is announced at Gleneagles on Monday. As of the latest update, the three qualifiers off the Ladies European Tour points list are Carlota Ciganda, Caroline Hedwall and Ann van Dam. The five who qualify off the Rolex Rankings are Charley Hull, Georgia Hall, Azahara Munoz, Caroline Masson and Anna Nordqvist. Ciganda is the only player that has been mathematically confirmed on the team.

Suzann Pettersen, set to be one of Captain Catriona Matthew’s vice captains in September, has recently expressed interest in playing in her ninth Solheim Cup. After partnering with Matthew at the Dow Great Lakes Bay Invitational, Pettersen is set to make her first independent LPGA start since 2017 this week.

“Obviously she's got the experience there,” Matthew said of Pettersen. “I would say she's looking good, actually. I think she's looking confident. She putted well at the Dow. So it will be interesting to see how she did this week.”

Nordqvist, a five-time member of Team Europe, is feeling confident and said she’s looking forward to the qualification process being over.

“I feel pretty good,” Nordqvist said of her chances. “Obviously for a long time it's been on my mind, and I'm kind of excited about the whole qualifying process because there's so much talk about it, and everyone's -- I don't know, there's a lot of talk of who is going to make the team and there's just a lot of speculation. I'm going to try to focus on my game this week and if I do well, I know I'll be there.”

Masson is having a solid year making 17 of 18 cuts including a season-best T5 finish at the Marathon Classic, and this week she is looking to continue her consistent play to punch her ticket to her fourth Solheim Cup.

“You never know for sure,” Masson said of the opportunity to play for Matthew. “Things can still change this week, obviously, but yeah, I feel like I'm in a pretty good spot and playing well. Obviously I can help the team with experience and pretty good form, as well. Like I always say, I've been a pretty good team player I think. It's always been a huge goal and it's coming closer now, which is nice.”

Ladies European Tour star Carly Booth was hoping to make her Solheim Cup debut in her home country in September, but she’ll need a really strong finish to make a case for one of Matthew’s coveted picks.

“Unfortunately, I missed the cut last week, which means all the pressure is on this week to play well,” Booth said on Wednesday at The Renaissance Club. “I'm still hopeful, but if not, I tried my best. There's always two years' time, too. Of course, with it being at Gleneagles this year, it would have been pretty amazing to play.”

NORDQVIST BACK TO FORM IN SCOTLAND

Anna Nordqvist enters the Aberdeen Standard Investments Ladies Scottish Open fresh off a T11 finish at the AIG Women’s British Open, which was her first top-20 finish in a major championship since winning the 2017 Evian Championship. The Swede says she has been feeling good about the status of her golf game for the last few weeks but is relieved to have finally seen it translate to a good finish at the major championship finale.

“I think definitely it gives you a little bit more peace about the things you're doing and you work on the right stuff,” Nordqvist said on Wednesday in North Berwick. “Hit it really well at Evian for two days. A couple bad breaks on the back nine, and missed the cut and you're sitting out the weekend and that's definitely not going to boost your confidence, especially when you're hitting it good. It's a fine line. But it's just nice to see what I've been working on for a long time is starting to pay off a little bit.”

The eight-time LPGA winner and two-time major champion is expecting a good links challenge this week and will be looking for a solid finish to secure a place on her sixth Solheim Cup team.

“We walked the course yesterday. It's crazy,” Nordqvist said of The Renaissance Club. “Some holes play really long and I think some of these greens, you're supposed to have a long club into. It's going to be tricky because just the way the greens are and especially if we get some wind. But it's a good test.”

Nordqvist will tee off the first round at 7:44 a.m. off the 10th tee with Sei Young Kim and Hannah Green.

Making her first solo start on the LPGA Tour since 2017, Suzann Pettersen will tee off the first round at 7:33 a.m. off the 10th tee alongside Solheim Cup hopefuls Anne van Dam and Celine Boutier

Ariya Jutanugarn will tee off the first round of her title defense at 7:55 a.m. playing alongside fellow major champions Georgia Hall and Jeongeun Lee6 off the 10th tee

The season-long Aon Risk Reward Challenge will highlight the world’s best professional golfers as they tackle the most strategically challenging holes across both the LPGA Tour and PGA TOUR schedules. The player from each Tour on top of the Aon leaderboard at the end of the regular season will receive a $1 million prize. The scoring system is identical on both the LPGA Tour and PGA TOUR, and players will take their best two scores from each Aon Risk Reward Challenge hole, with the winners having the best average score to par at the end of the season. Players must play a minimum of 40 rounds throughout the season. The Challenge runs across regular season tournaments (29 LPGA Tour; 36 PGA TOUR).

The designated Aon Risk Reward Challenge hole at the Aberdeen Standard Investments Ladies Scottish Open is the 14th, a teasing par 4 which is potentially drivable depending on set-up. This hole usually plays into the prevailing wind. During tournament week, the 14th will initially be set at 338 yards, though it will likely play shorter and could come in at just 270 yards for at least one round. The green is extremely sloped with steep fall-offs front and back, placing a premium on a well-struck approach.

Heading into the Aberdeen Standard Investments Ladies Scottish Open, Lee-Anne Pace leads the standings at -0.818, followed by Hyo Joo Kim at -0.750 and Ariya Jutanugarn and Carlota Ciganda at -0.722.

The AXA LPGA Volunteer Service Award is a program launched in 2018 to recognize exemplary volunteers at each LPGA tournament. This week’s award recipient is Stuart Wright, who has contributed over 200 hours as a volunteer coordinator for both the men’s and ladies Scottish Opens.

After the 2019 season, the name of one AXA LPGA Volunteer Award recipient will be drawn in a random selection. That winning volunteer’s tournament charity will be awarded $10,000 on behalf of AXA. The 2019 Aberdeen Standard Investments Ladies Scottish Open supports Dementia UK.