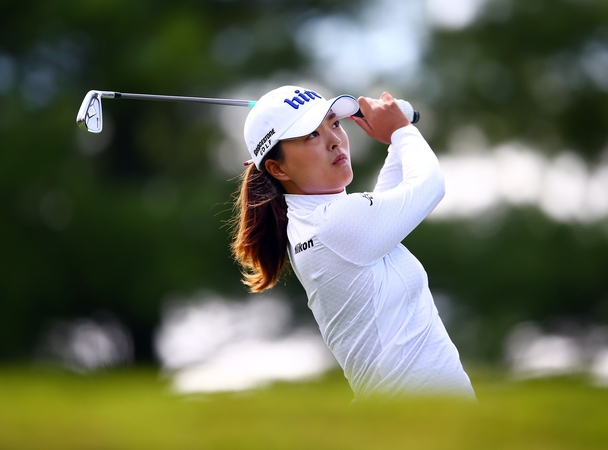 Rolex Rankings No. 1 Jin Young Ko and Nicole Broch Larsen are tied atop the leaderboard at -18 heading into Sunday’s final round of the 2019 CP Women’s Open.

But with Canadian phenom Brooke Henderson sitting two strokes behind at -16, the trophy is anything but secure.

Ko and Henderson both returned 65s on Saturday, tied for the low round of the day, while Broch Larsen carded her third consecutive 66. Much to the chagrin of the throngs of Canadian fans, Henderson was 2 over through seven holes. But a special encounter with a young fan turned the switch for Henderson. She was 9 under through her final 11 holes, with an eagle at No. 12 and seven birdies, to surge back up the leaderboard.

“It was a little bit of a struggle there. I felt like I was playing decent golf. Just wasn't really going my way,” said Henderson. “Then on the seventh green a little boy gave me a high five and then he continued that the rest of the round. I think starting at the time he kind of cheered me up a little bit. I think I tried to get back to even on the front nine. Going to eight tee, I was trying to just make two birdies, get it back to even and then see if I could go really low on the back, which I did.”

The fan roars could be heard all the way around the golf course, meaning Ko and Broch Larsen, playing one group behind Henderson, were well aware of what was going on in front of them.

“We could definitely hear those roars coming in on the back nine. Every time they went a little bit louder than normal I felt like, yeah, you knew Brooke made a birdie,” said Broch Larsen. “I saw she was off to a rough start but made a really good back nine, I guess.”

American Amy Olson shot her third consecutive 68 to sit in a tie for fifth and is in prime position to play her way onto the U.S. Solheim Cup Team, which will be decided following Sunday’s completion of play. Olson, Angel Yin (T8), Brittany Altomare (T22), Ally McDonald (T45) and Annie Park (T49) are among the American players vying for the eighth berth on the Solheim Cup points standings and the two automatic qualifying spots via the Rolex Women’s World Golf Rankings, with an additional two wild-card spots in the hands of Captain Juli Inkster.

Brooke Henderson would become the third player in CP Women’s Open history to successfully defend her title, joining Lydia Ko (2012 and 2013) and Pat Bradley (1985 and 1986)

HENDERSON IN PRIME POSITION TO REPEAT

When Brooke Henderson met with the media on Tuesday, she said winning the 2018 CP Women’s Open was “the highlight of my career so far.” Henderson, the winningest Canadian professional golfer on the LPGA and PGA Tours with nine wins, has the chance to add to her national-championship legacy on Sunday as she will start the final round just two strokes off the lead.

While the 21-year-old Canadian has twice successfully defended an LPGA Tour title, winning Club 2015 and 2016 Cambia Portland Classic and the 2018 and 2019 LOTTE Championship, playing Magna Golf Course for the first time this year changes the stakes.

“Unlike those two events, this is a different golf course, so I can't rely on some great memories from the year previous when I stepped on the tee,” said Henderson. “But I think just knowing how I handled it last year and just if I could shoot another 65 like I did the last Sunday of the CP Women's Open that would be pretty special. I feel like I would have a good shot at it.”

Henderson used five birdies and an eagle to come home in 29 on Saturday to tie the lowest nine-hole score on a par-72 course for the LPGA this season, a performance she’s hoping she can repeat in the final round.

“Just like any tournament, it's won on the back nine on Sunday really. Hopefully I can just kind of repeat what I did today. It would be really special. To do it once is incredible. To do it twice would be really awesome.”

If the past three days are any indication, droves of Canadian fans are expected to be following the final grouping on Sunday and Henderson said she really thrives on the support from her home country.

“The Brooke Brigade has been really awesome and all the fans that have been here supporting me since early Thursday morning,” said Henderson. “It's been surreal and an awesome week, and hopefully I can play well tomorrow.”

Nicole Broch Larsen, a native of Hillerod, Denmark, admitted to a good case of nerves as her tee time approached, especially after a restless night that saw her wake up long before her alarm blared. Her 6-under 66 certainly belied those jitters, with her round highlighted by an eagle at No. 14 to go with five birdies and one bogey.

“I felt better when I got out on the course. I felt pretty chilled when I arrived, and then as the tee time got closer I felt like my heartbeat was a little bit faster than normal,” said Broch Larsen. “I just took some deep breaths and was reminding myself of what I planned with my coach. I felt like I did really well today. And, yeah, I'm proud of myself.”

This is the second time that Broch Larsen holds a portion of the 54-hole lead at the CP Women’s Open. She shot a final-round 71 at the 2017 championship to finish tied for third.

NO STRESS, NO PROBLEMS FOR HSU

Coming into the 2019 LPGA season, 2015 rookie Wei-Ling Hsu had high expectations. After having the best year of her career in 2018, where she collected a career-high four top-10 finishes, she thought it was high time she found the winner’s circle. Her plan nearly came to fruition as she finished in third at the ISPS Handa Women’s Australian Open to open her 2019 campaign.

After that things didn’t come as easily for the 24-year-old, as a solo fifth-place finish at the Pure Silk Championship is her lone top-30 finish in her last 18 starts. The difference this week? Hsu said it’s all about her attitude.

“Get rid of the stress. I was very stressed out the past two month and try to improve, but the main thing is just mental game,” said Hsu. “I'm just try to be perfect every time and try to show everybody that I can do it, but actually I just put way too much pressure on my shoulder.”

Hsu’s 54-hole 203 is her career-best mark and she said she’s really enjoying her time at the CP Women’s Open on Magna Golf Club.

“I love this golf course. I will say this is the top three golf course that I like it this season,” she said. “Definitely very happy to see I can able to shoot 7-under today. Just give myself a lot of confidence and getting more comfortable in the close to the leader group.”

The competition for the eighth spot on the USA Solheim Cup points list is down to three players – Brittany Altomare, Ally McDonald and Angel Yin. Altomare holds the final spot by 7.5 points over McDonald and 40.5 points over Yin.

Since CP assumed title sponsorship in 2014, the CP Women’s Open has raised $8.5 million in support of children’s heart health.

The 2019 tournament benefits SickKids Foundation, which raises funds on behalf of The Hospital for Sick Children, a pediatric teaching hospital in Toronto. The foundation is Canada’s largest funder of child health research, learning and care. The funds raised at the 2019 CP Women’s Open will help SickKids updated a Cardiac Operating Unit at the hospital. Additionally, a donation will be made to the Southlake Regional Health Centre.

Perhaps the most visible charitable portion of the tournament is the Birdies for Heart program. For each birdie made at the par-3 17th hole, CP will donate $5,000 to SickKids. Saturday saw nine birdies at No. 17, which translates to $45,000 donated to SickKids. The Thursday donation was $55,000 off 11 birdies, while Friday raised $80,000 off 16 birdies.

Rolex Rankings World No. 1 Sung Hyun Park is the only player with a mathematical chance to overtake No. 1 Jin Young Ko based on her finish at the CP Women’s Open. Park must win and have Ko finish solo third or worse, or she must finish solo second and have Ko finish solo 25th or worse. There may be additional possibilities with tie scenarios and separate projection scenarios would be run to check. After the third round, Ko is tied for first and Park is tied for 36th.