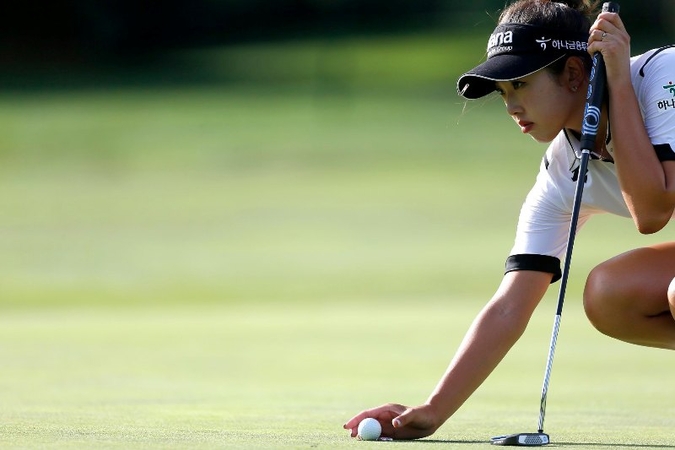 Sunday at the Cambia Portland Classic would be a career-changing day for 18-year-old American Yealimi Noh.

The native of Concord, Calif., shot a bogey-free 8-under 64 on Saturday and surged to the top of the leaderboard at -19, setting the tournament’s 54-hole scoring record at 197. She carries a three-stroke lead over Australia’s Hannah Green into Sunday’s final round.

“I was hoping for a good week, but to be in contention, I'm really excited,” said Noh, who turned professional in January at age 17. “Yesterday, too, I was just like, I couldn't really sleep. I was excited to come out and try to move on moving day.”

Noh’s 64 on Saturday was the low round of the day, with four birdies on each side. Her birdie at the par-3 second hole was the moment she pointed to as the force behind her successful round.

“After the first birdie, I can keep going but just getting that first one is, like, tough, when you're starting the round,” said Noh, who was also in contention at July’s Thornberry Creek LPGA Classic, where she entered the final round one stroke off the lead and ultimately tied for sixth. “So I was just really glad to start off with a birdie early in the round and it just kind of kept going throughout the front nine.”

Green followed up Friday’s bogey-free 63 with a lackluster 73 on Saturday. After carding consecutive birdies at holes 4 and 5, three bogeys over her final 12 holes dropped her from five strokes ahead of the field to three behind Noh.

“The greens were a lot quicker, I think a lot quicker than the practice green and maybe that threw a few people off,” said Green, the 2019 KPMG Women’s PGA Championship winner. “It certainly surprised me once I got out there, and I still found it really difficult, even towards the end of the round, to get the pace correct. But the pins, I didn't find too difficult. You could easily be on the wrong side of the pin, but I think just with it becoming a bit firmer and a little bit of wind made a huge difference today.”

Canadian Brooke Henderson and the USA’s Brittany Altomare are tied for third at -14. Henderson is the last Monday Qualifier to win an LPGA Tour event, a win that came at the 2015 Cambia Portland Classic and earned her LPGA Membership.

Yealimi Noh would earn LPGA Tour Membership; she could accept immediate Membership, making 2019 her rookie year, or defer her Membership and rookie season until 2020

Noh would become the first 18-year-old to win since 2016, when Lydia Ko and Brooke Henderson both won at age 18

Noh was not able to seal the deal in Wisconsin, starting the day one stroke off the lead but falling into a tie for sixth with a final-round 68, unable to keep up with the firepower around her. On Sunday in Portland, she will have a second chance for LPGA glory, hoping to join AIG Women’s British Open champion Hinako Shibuno as non-Members to win 2019 LPGA Tour events.

And what exactly would it mean to her to win on Sunday? “It would change my entire like, year, my life. That would just be a dream come true.”

If there is anyone who knows what Yealimi Noh is facing, it’s Brooke Henderson. In 2015, Henderson reached the Cambia Portland Classic field as a Monday Qualifier and won the tournament as a 17-year-old non-Member. With that victory, she successfully petitioned LPGA Commissioner Mike What for immediate Tour Membership. Noh has already turned 18 and does not have that hurdle ahead of her. But Henderson fully knows the challenges Noh will face when she takes to Columbia Edgewater in Sunday’s final round.

“I had I think a five-shot lead on Sunday, so I was just terrified. Just like don't give that away. I was just trying to make more birdies and stay ahead of the crowd,” said Henderson of her life-changing win four years ago. “It's really fun. It's the opportunity of a lifetime, and you can make it easier on yourself if you can go out and play one round well, as opposed to going to Q-School. If you can capitalize, it changes your whole life.