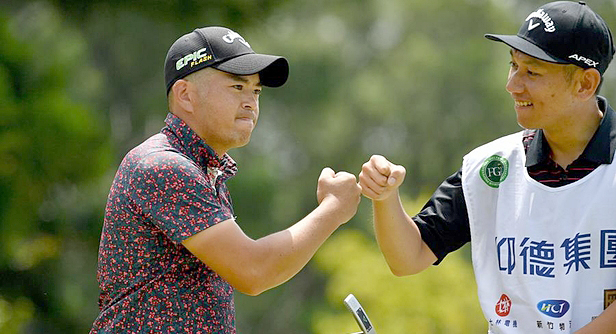 Linkou - Local hotshot Chan Shih-chang took advantage of an opening birdie burst to sign for a flawless eight-under-par 64 and grab a share of the halfway lead at the Yeangder Tournament Players Championship (TPC) on Friday.

The 33-year-old Chan fired six consecutive birdies from the 10th hole before adding back-to-back birdies on fourth and fifth to sit atop the leaderboard alongside Korean duo Yikeun Chang and Doyeob Mun on matching totals of 11-under-par 133s.

Chang and Mun, who are roommates this week, carded identical 66s to match the efforts of Chan at the Linkou International Golf and Country Club. Chan played a total of 27 holes today as he had to complete the last nine holes of his opening round in the morning where he signed for a 69.

The leading trio holds a two-shot edge over American Casey O’Toole (67), Thai-Japanese Kosuke Hamamoto (69) and local stalwart Lin Wen-tang, who fired three birdies in his closing four holes for a 68 at the US$500,000 event, which is celebrating its 10th edition on the Asian Tour.

Play was abandoned for the day at 6.17pm local time due to fading light. A total of 30 players will resume their second rounds at 7.00am on Saturday with the penultimate round scheduled to start not earlier than 9.00am.

A total of 72 players had returned to complete their opening rounds on Friday morning after four hours of play was lost due to several weather suspensions on Thursday.

The halfway cut is projected to be at one-under-par 143 where the top 65 players and ties will progress to the next two rounds.