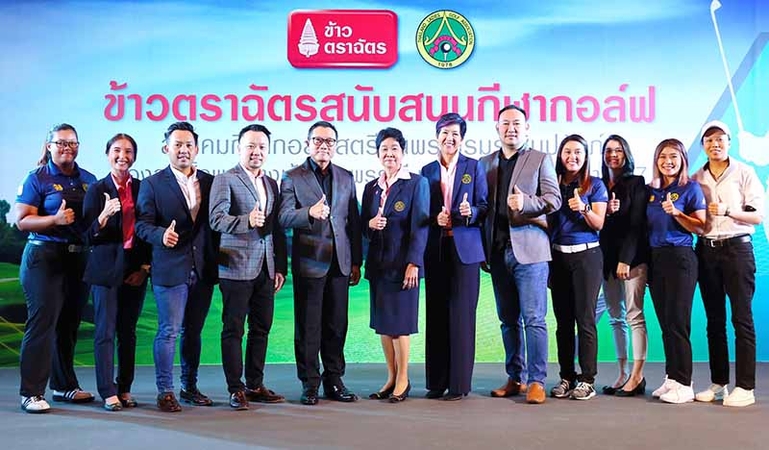 CP Trading Group Co Ltd, the producer and distributor of Royal Umbrella Rice, has reaffirmed its commitment to the development of young athletes in Thailand by extending its support to the Thailand Ladies Golf Association (TLGA).

CEO Sumeth Laomoraphorn said at a press conference that the company has been supporting a number of sports in the country with the latest being the TLGA.

“We remain committed to the concept of ‘Khaothai-Dekthai Soo Vetheeloke” (Thai rice and Thai youth to the world stage) in our support for Thai sports. Our support has now extended to the Thailand Ladies Golf Association, which has been playing a big part in the development of female golf players for 41 years. We want to see the next generation of female golfers following the footsteps of the country’s leading players including the Jutanugarn sisters, Ariya and Moriya. At present, ‘Jeen’ Atthaya Thitikul,16, is among the rising stars under the guidance of the association and she has already won many titles in recent years. We hope our support would encourage Atthaya and other young golfers to work harder and put on a great performance”.

“We want to see young badminton players progressing to the professional levels. The school has produced many great players, such as Thailand's No 1 Ratchanok Intanon and two-time world junior champion Kulavut Vitidsarn,” Sumeth said.

Jittakarn Lamsam, president of Thailand Ladies Golf Association, thanked Royal Umbrella Rice for the support, saying that it would help promote the sport in the country.

“I would like to thank Royal Umbrella Rice for the support. With that, we will have more resources for the development of female golfers at youth level. Some of whom have participated in competitions at both national and international levels, including the Queen Sirikit Cup, won by Atthaya last year, the Thailand Ladies Amateur Open and the Inter-Club Team Championships. Moreover, a Junior Development Fund has been set up to subsidise the training programme for promising junior golfers in preparation of them joining the national team or turning professional”.

Amateur Atthaya, who has won many professional tournaments and got wildcards to play in many LPGA tour events, was happy to see Royal Umbrella Rice extending its support to female golfers.

“I want to thank the association for its contribution to the sport and hosting many tournaments for us to hone our skills. Also, I want to thank Royal Umbrella Rice for its support to golf and badminton. I really believe that it would play a big part in helping a player to be successful on the world stage. For me, I would try to play as many tournaments as possible to gain experiences. One of my goals this year is to defend my titles in the SEA Games in the Philippines in December,” said the 16-year-old, who won two gold medals at the 2017 SEA Games in Malaysia.

Thailand Ladies Golf Association was officially registered as an association on February 12,1978 with Mom Kobkaew Abhakara Na Ayudhya as head of the founding members. Its mission is to support and promote female golfers to compete in the Olympic Games or turn professional. It also hosts tournaments and train amateur golfers for international tournaments. Among the players, who were under the guidance of the association are Virada Gomutputra (Nirapathpongporn), Aree Wongluekiet, Pornanong Phatlum, Thidapa Suwannapura, Budsabakorn Sukapan, Supamas Sangchan, Kultida Pramphun, Tunrada Piddon and Atthaya Thitikul.