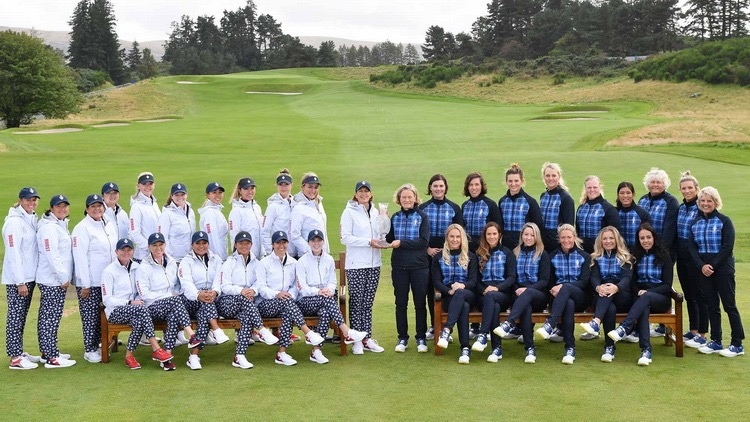 In front of passionate golf fans at the 2019 Solheim Cup Opening Ceremony, USA Captain Juli Inkster and Europe Captain Catriona Matthew unveiled their pairings for Friday’s foursomes round, set to begin at 8:10 a.m. at Gleneagles in Scotland.

Both teams are going all-in with their rookies on Friday morning. While six-time Solheim Cup veteran Morgan Pressel will hit the first tee shot for the Americans, five rookies (Marina Alex, Brittany Altomare, Nelly Korda, Megan Khang and Annie Park) will see morning action. Team Europe placed Bronte Law in the opening group, with Celine Boutier off right after her.

“I really wanted to get my rookies out there in the morning and get them out playing,” said Inkster. “That was a lot of our thinking. I feel like we’ve got some pretty good rookie alternate-shot players.”

The only USA rookie to sit for the morning session is Ally McDonald, who was named to the team on Tuesday when Stacy Lewis withdrew due to a back injury. According to Inkster, McDonald’s late addition to the team was a factor in that decision, but McDonald will tee it up in the afternoon session.

Like Inkster, Matthew did not want her rookies to sit around too long without getting into the action. “We wanted to try and get as many rookies out as we could the first day, the first morning,” said Matthew. “It’s just that’s a long hang-on if they want to go any later. And they’ve all keyed up, ready go.”

When they tee off on Friday at 8:34 a.m., Jessica Korda and Nelly Korda will make Solheim Cup history as the first sisters to play together. In 1998, Swedish sisters Annika Sorenstam and Charlotta Sorenstam played for Team Europe, but they were never paired together.

“I was actually really surprised to learn that the Sorenstam sisters didn't play together. I didn't know that. I just figured they did,” said Jessica Korda with a laugh. “Hopefully it can be something great. We'll see how everything turns out. And we're just happy to be here and just enjoy our week.”

The duo petitioned Captain Juli Inkster for the opportunity to play together. Inkster admitted to not being completely sold on the plan, but she relented after the sisters tied for 12th at the Dow Great Lakes Bay Invitational – and successfully remained friends.

“This is not often you get two sisters on one team,” said Inkster. “They should have the right to play together. And Jessica said, why do you see how we play in the Dow together. If we kill each other, then maybe don’t put us together.”

“We kind of know what ticks one another off and we know how to calm each other down as well,” added Nelly Korda. “I think we handled it quite well at Dow and kind of got a game plan going.”

Jessica Korda is appearing in her second Solheim Cup and first since 2013. She did not qualify for the team in 2015 and while she was an automatic qualifier in 2017, she was forced to withdraw prior to the competition with a forearm injury. Her return to Team USA is made extra sweet by having her younger sister at her side.

“It's great to be part of a team environment,” said Korda, who went 1-2-1 in 2013 in Colorado. “Luckily, I had a little bit of taste of that last year at International Crown but being able to play on a bigger team and be part of the Solheim Cup is always super special. So I'm just happy to be back and healthy.”

The Kordas will tee off at 8:34 a.m., going up against Caroline Masson and Jodi Ewart Shadoff.

NEW PAIRING ON THE BLOCK

In her past three Solheim Cup appearances, Thompson has played with Kerr in six of eight four-ball and foursomes matches, posting a 4-0-2 record. With a young U.S. team and Kerr not making the 2019 squad, Thompson will take on more of a leadership role as she plays alongside Brittany Altomare, who is making her Cup debut.

“It's definitely different not having Cristie Kerr here,” said Thompson. “She's always a special part of the team aspect in Solheim Cup. She's definitely missed but we know she's here in spirit, cheering us on. But I've played with my pod [Altomare, Jessica Korda, Nelly Korda] and my teammates and compared games, and see which ones mesh together the best. And we've been talking about it, and just really getting to know each other more. It's big on personalities, too, not just games and team format.”

Altomare played her way into the eighth and final qualifying spot on Team USA with seven top 10s during the qualifying period, including a runner-up finish at the 2017 Evian Championship. She’s loving reliving the camaraderie she enjoyed as a four-time All-American at the University of Virginia and also on the 2006 Junior Ryder Cup team.

“I got to be on a team for four years at Virginia,” said Altomare. “And I just loved being on a team. I loved having teammates, because I think it makes you play harder and it makes you play better. You're playing for something more than just yourself, which I think is what this week is about. So I'm really looking forward to playing on a team again and playing for more than just myself.”

“I mean, you’ve got two great players playing together,” said Inkster. “They just kind of feed off each other. Yes, we miss Cristie, but I think Brittany Altomare showed us a lot this year. She didn’t miss a cut. She’s my leading birdie getter for the United States. So she’s got a solid game. And it’s funny, her and Lexi just kind of hit it off. So, to me, it just works out well that they’re playing together.”

The American duo will tee off their foursomes match on Friday at 8:22 a.m. against Georgia Hall and Celine Boutier.

Lizette Salas and Megan Khang are finding the fairway more than 80% of the time and are ranked sixth and seventh in driving accuracy on the LPGA Tour in 2019. Salas leads the American team in accuracy and has been the most consistent in this stat over the last five years. The next highest ranked player in the top 20 is Marina Alex at 78%, followed by Anna Nordqvist and Celine Boutier at 77% and Ally McDonald at 76.9%.

Carlota Ciganda ranks first in eagles made (17) and third in birdies made (308) on the season. Ciganda is just two eagles away from tying the record for most eagles in a season, a mark of 19 set by European Vice Captain Laura Davies in 2004. Five players are currently ranked in the top 10 in eagles on the LPGA Tour. Ciganda and Anne van Dam have combined to make a total of 31 eagles this year compared to Brittany Altomare, Lexi Thompson and Jessica Korda with a total of 27 eagles.