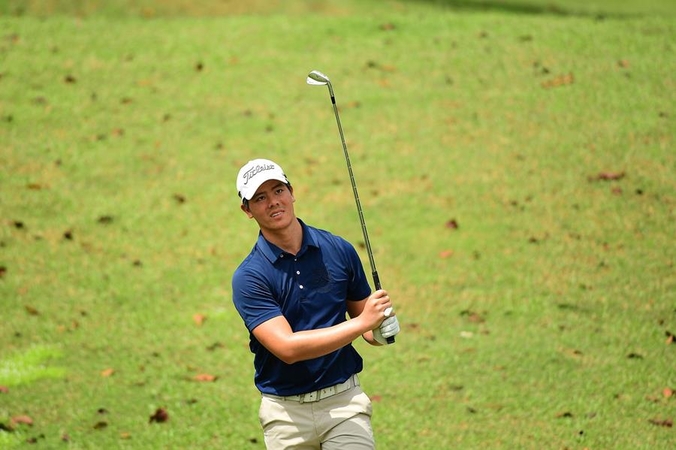 The 26-year-old, still winless after playing four seasons on the Asian Development Tour (ADT), mixed his card with seven birdies and two bogeys to lead by one shot from local hope  Joshua Andrew Wirawan at the US$100,000 event.

Chinese Taipei’s  Wang Wei-lun and American Trevor Simsby carded identical 69s to take third place while Sam Gillis of the United States, Jesse Yap of Singapore and Udayan Mane of India are tied for fifth at a further shot back  at the Parahyangan Golf.

Lau, who started on the back-nine 10, dropped a bogey on 13 but quickly recovered with three birdies over the next four holes to turn in 34.

The Malaysian continued his solid display after crossing over, picking up four more shots including a hat-trick of birdies on holes six, seven and eight to offset his second blemish of the day on five.

"I'm very pleased with a 67 today as this golf course could play pretty tough in the wind.

"I played simple golf today and I stuck to my game plan. Hit fairways and greens and fortunately made quite a few putts within eight feet and in which helped a lot.

"But other than that I just minimised mistakes today and put the ball in play that was basically it," said Lau.

Lau insists the good start would count for nothing if he cannot replicate the same consistency  over the next three rounds.

At the PGM Northport ADT Championship last month, Lau also fired 67 to be just one shot off the pace after the opening round, but failed to build on it and settled for tied 25th.

"Consistency will happen through experience. So, I won’t try to put four good rounds together.

"I’ll just play my game and let it happen. Not going to think about it and take it one round at a time," he said.

Wirawan credited his strong iron play after he impressed with a round of seven birdies, with five coming from the opening eight holesand three bogeys.

"In the first-nine, my iron play was really good. I hit a lot of greens and most of them landed on within 10 feet, and I made the most of my putts.

"I could not do as well in the back-nine though as the wind started to pick up. I was struggling to figure out on my club selection, especially on par-three. But overall I’m happy with my game today," said Wirawan, who has one domestic title won in 2017 under his belt.

Wirawan hopes to take advantage of the solid start and try turn it into a possible victory.

"I had a chat with Rory after his win in India. He was trying to lift my confidence by saying 'you have to play to win, not just to make cut. If I can do it, so can you'. That was truly inspiring and hopefully I can do the same too!" said Wirawan.

George Gandranata remainsthe only Indonesian golfer to have emerged ADT winner when he clinched the PGM LADA Langkawi Championship in 2016.

The winner will receive six OWGR points while the top six players and ties will also earn points based on a sliding scale.

For more information on the ADT, please visit www.asiandevelopmenttour.com