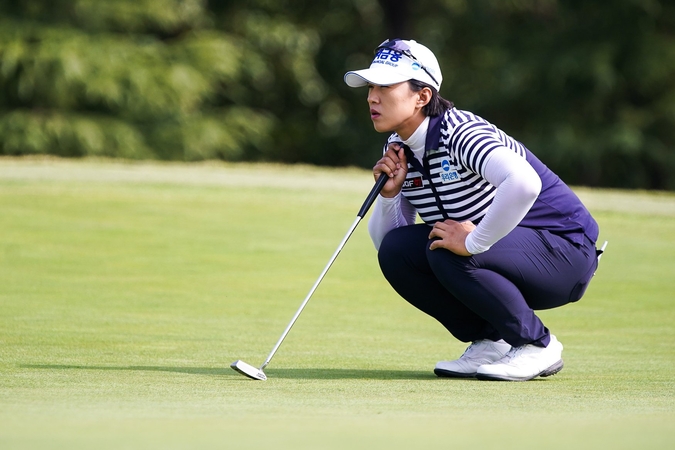 Amy Yang of South Korea looks over a green on the 1st hole during Round 1 of Buick LPGA Shanghai at Shanghai Qizhong Garden Golf Club on October 17, 2019 in Shanghai, China. (Photo by Yifan Ding/Getty Images)

Amy Yang and Nasa Hataoka returned first-round 67s on Thursday and share the lead after 18 holes at the 2019 Buick LPGA Shanghai. Both players carded six birdies to just one bogey in their rounds, with Yang leading the field by hitting 17 of 18 greens.

“I'm happy how I played today,” said Yang, who won February’s Honda LPGA Thailand for her fourth career LPGA victory. “My swing felt very stable out there and hit some lot of solid shots out there and making some good putts, so it's been a good round.”

Hataoka comes to Shanghai as one of the hottest players in women’s golf. The native of Ibaraki, Japan, has not finished outside the top seven in her last five events across the LPGA and JLPGA Tours, including two JLPGA major wins at the Japan LPGA Championship Konica Minolta Cup and the Japan Women’s Open Golf Championship. She visited the LPGA Tour’s victory circle at the 2019 Kia Classic.

Americans Jessica Korda and Angel Yin are tied for third at -4. Defending champion Danielle Kang is one of seven players tied for fifth at -3, while Shanshan Feng opened with a 2-under 70 and sits tied for 12th.

It’s very fair to say that Amy Yang really likes playing in Asia. The 30-year-old from Ilsan, Republic of Korea, has four LPGA victories to her name, all coming while the Tour was visiting Asia. She earned her first victory in her home country at the 2013 LPGA KEB Hana Bank Championship, and she captured the 2013, 2015 and 2019 Honda LPGA Thailand.

She certainly got her quest for a fifth title off to a good start on Thursday, sitting in a share of first after 18 holes with Nasa Hataoka. But the veteran player knows that it’s far too early to be thinking about adding another win to the resume.

“We have 54 more holes to go,” she said with a laugh. “I have been working hard, so I would like to see some good results in this Asia swing.”

The par-3 second at Qizhong Garden Golf Club quickly became a favorite hole for Brittany Altomare. Starting from No. 10, Altomare made the turn at 2-over on her round. But on No. 2, Altomare rolled in an ace from 175 yards using a 6-iron, her first hole-in-one in LPGA competition. Her ball hit the front portion of the green and quickly sped right into the center of the hole. She followed with birdies at holes 4 and 5 to finish with a 2-under 70 and is tied for 12th going into the second round.

“I just came off a couple holes that didn't really go my way and I felt good about the club that I had,” said Altomare, who said it was her seventh career hole-in-one. “Made a really good swing finally and went right where I wanted to and went in the hole.”

For her efforts, Altomare won a 2019 Buick Lacrosse Avenir. Her ace was the 26th of the LPGA Tour season, with every ace coming from a different player.

The Buick LPGA Shanghai marks Jessica Korda’s first competition since she went 3-0-1 for Team USA at the Solheim Cup in September. With the extended break behind her, an opening-round 68 brought a smile to the tall American’s face – the hard re-entry into competition was over.

“A little rusty with a couple shots. I'm going to go to the driving range and try to figure that out a little bit,” said Korda of her performance. “But, yeah, I was really proud of myself today. Speed of the greens was changing a lot. Definitely got a lot faster at the end, but I was able to keep it together.”