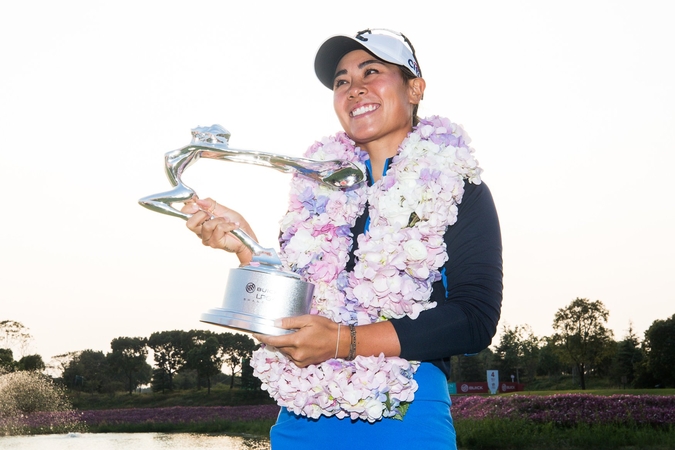 On her 27th birthday, the American captured the 2019 Buick LPGA Shanghai, successfully defending her 2018 title at Qizhong Garden Golf Club with a one-stroke win over Jessica Korda. Kang shot a bogey-free 2-under 70 on Sunday, breaking her own tournament record to finish at 16-under 272.

Kang pulled two strokes clear of Korda with a birdie at the 15th, but on 17, Korda got back within one with a birdie of her own. At 18, Kang came up 3 feet short on her 25-foot birdie putt and admitted to a good case of nerves over what ultimately became her winning putt.

“It was a really stressful day. I definitely played well out there. It was really tough because you're definitely watching what Jessica is shooting and scoring, and always just try to keep in my own game,” said Kang. “There were a lot of birdie opportunities. I made some really great up and downs. I've never been more nervous than the last putt for some reason, but I made it.”

Korda was unable to keep up with the mistake-free Kang. After starting the day one stroke ahead of Kang, she shot even-par 72 with three birdies and three bogeys.

Yu Liu, of the People's Republic of China, surged up the leaderboard with a final-round 65 and tied for third with Japan’s Nasa Hataoka and American LPGA rookie Kristen Gillman, who earned the best finish of her LPGA career. Megan Khang tied the 18-hole scoring record of 8-under 64, acing the par-3 11th to go with six birdies to finish tied for seventh.

Her mother Grace Kang, her brother Alex Kang, her boyfriend Maverick McNealy, her caddie Olly Brett, her coach Butch Harmon. For 2019 Buick LPGA Shanghai champion Danielle Kang, the long list of people she thanked in her victory speech speaks volumes on her personal connection to the game.

“I went home last week, flew all the way back from Korea and worked on my short game with my brother, and I've been working on my short game with Maverick,” said Kang, who travels weekly with her mother and keeps the rest of her team close via FaceTime. “My mom told me I needed my chipping to get better, and it's definitely better.”

That close collaboration came together in Kang’s superb short-game play on Sunday. Clutch bunker play at 8, 9, 10 and 11 kept Kang out of trouble, success she credited to that time at home in Las Vegas working with her brother. She also acknowledges her brother for keeping her mentally refreshed and focused.

“One of the main things I work on is to be positive. My brother told me few years back to tell myself a lot of positive things you do on the golf course so I don't get dwell on all the negatives that happen sometimes,” said Kang. “It's something that I'm working on, something that I got reminded of.”

Kristen Gillman’s first trip to the People’s Republic of China brought a huge smile to her face. The 2019 Tour rookie tied for third at -13 in her first Asia Swing appearance, the best finish of her young LPGA career.

“I definitely knew I would be able to do it, but also being a rookie and being in Asia - or at least in China for my first time - you don't really expect to have this good of a finish and your best finish so far this year out of the country,” said Gillman, whose previous best finish was a tie for sixth at the 2019 ANA Inspiration. “It's kind of nice to be able to start it that way.”

Gillman is wrapping up a successful rookie campaign that has seen her earn four top-10 finishes. She sits second in the Louise Suggs Rolex Rookie of the Year race, which has already been clinched by Jeongeun Lee6.

LIU THANKS FENG FOR INSPIRING NEXT GENERATION OF CHINESE GOLFERS

With a final-round 67, second-year LPGA Tour player Yu Liu jumped into a tie for third and earned her seventh top-10 finish of the season. Liu was especially proud of how she was able bounce back from a 4-over 76 on Thursday and record the second-best finish of her career, behind only a tie for second at the 2019 Bank of Hope Founders Cup.

“I had pretty high expectations, to be honest. That's why I kind of didn't do as well as I would have liked on the first round playing with Nasa and Nelly, two of the very top players,” said Liu. “I wasn't in my tournament zone for the entire round, but I thought about it. Like I give it a lot of thinking after the round that night. I'm glad it paid off the very next day and I shot a very low round in tough conditions.”

As one of the rising young stars on the LPGA Tour, Liu is following firmly in the footsteps of her role model and countrywoman Shanshan Feng, the first golfer from Mainland China, male or female, to reach World No. 1.

“She's just the greatest icon, the greatest role model for all the young kids, for all the next generation golfers,” said Liu. “Her achievements, it's just so high up there. I looked at her stats one day. I was looking through the career Money List and she ranked top 15 in history, so that means she's like one of the greatest golfers of all time. Her consistency, her attitude towards the game, life, is just something that we can always look up to and learn from.”

Five players made aces at the Buick LPGA Shanghai – Brittany Altomare (first round, second hole), Brooke Henderson (second round, second hole), Ariya Jutanugarn (second round, 11th hole), Megan Khang (fourth round, 11th hole) and non-member Yunjie Zhang (fourth round, seventh hole). It was the second time this season a tournament saw five aces, joining the Meijer LPGA Classic for Simply Give. There have been 30 aces made this season and a total of $600,000 donated thus far to St. Jude Children’s Research Hospital.

With tie for ninth at the Buick LPGA Shanghai, Brooke Henderson and Jin Young Ko move to the top of the leaderboard with 11 top-10 finishes. Four players are tied for third with 10 top-10s – Ariya Jutanugarn, Hyo Joo Kim, Nelly Korda and Jeongeun Lee6.