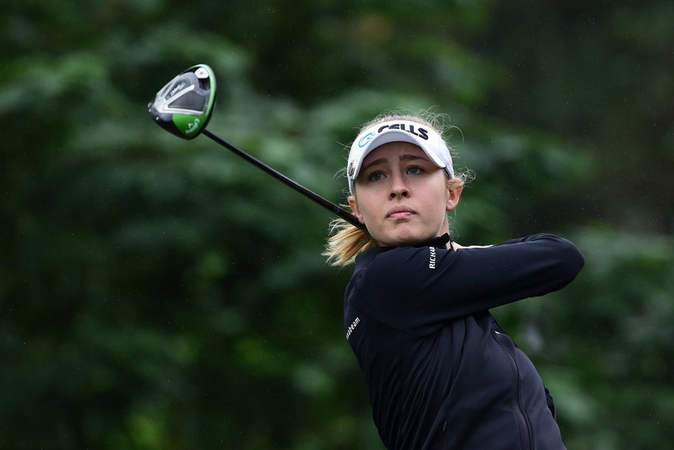 Nelly Korda of the United States tees off at the 4th hole during the first round of the Taiwan Swinging Skirts LPGA Presented By CTBC at Miramar Golf Country Club on October 31, 2019 in New Taipei City, Taiwan. (Photo by Suhaimi Abdullah/Getty Images)

Defending champion Nelly Korda is tied atop the leaderboard with two-time 2019 tournament winner Mi Jung Hur at 6-under par after round one of Taiwan Swinging Skirts LPGA presented by CTBC.

Hur managed to stay bogey-free on Thursday despite hitting only 6 of 14 fairways in tricky weather conditions that saw rain and swirling winds. Korda, who became a Rolex First-Time Winner at this event in 2018, had three bogeys coupled with seven birdies and an eagle to get off to a hot start. While there is pressure to defend her title, Korda said she was feeding off the support she got from the gallery in Chinese Taipei.

“It's definitely so special,” Korda said of being the defending champion. “I'm recognized by so many people now and everyone is really rooting for me. They are like, "Again! Again!" Hopefully I can get it done but there's still a lot of golf to be played.”

Australia’s Minjee Lee, who was runner-up to Korda at the event in 2018, sits in third at 5-under par following the first round. Lee was able to take advantage of the conditions on the back nine with four birdies and said that was key to her opening-round success.

“It was pretty windy out there, so I started with a birdie, which is nice, and then I think I took a little more advantage on the back nine where you could really -- some of the holes were downwind, so you would have a shorter shot in,” Lee said. “I holed a nice couple putts out of range [including a 30-footer on No. 5] so that was nice, too. I think overall, it was pretty solid.”

Four players are tied for fourth at 4-under par following the first round, Amy Olson, Caroline Masson, Angel Yin and Su Oh.

“Finally!” Nelly Korda said to her caddie, Jason McDede, as she watched her perfectly struck controlled 8-iron find the bottom of the cup from 131-yards for an eagle on the par-4 15th. The eagle proved to be just the boost the 21-year-old needed to start her first career title defense off on the right foot.

“Well, actually, when I holed out, it was just like, finally, because I've been so close this year, and it's lipped-out a couple of times. Finally when it went in, it felt really good.”

Thanks to the eagle on 15 and seven birdies, Korda heads into the second round tied atop the leaderboard at 6-under par. Korda hit 15 of 18 greens in regulation on Thursday, a stat that she says has been key to her impressive 2019 season.

“I think just on my irons a lot,” Korda, on what she’s been working on to post consistent results. “I make sure to dial in my irons quite well. I think that's kind of what I've done really well this year is I've raised my greens in reg, and I've given myself a lot of opportunities.”

Mi Jung Hur went five years between her maiden LPGA title at the 2009 Cambia Portland Classic, and her second career win at the 2014 Yokohama Tire LPGA Classic. Hur then waited another five years to hoist the trophy at the 2019 Aberdeen Standard Investments Ladies Scottish Open amidst rain and windy conditions. Hur’s five-year waiting streak would end there as she won the Indy Women in Tech Championship just two starts later in wire-to-wire fashion.

Hur got off to another great start as she posted a bogey-free 66 on Thursday at the Taiwan Swinging Skirts LPGA to sit in a tie for the lead. Hur’s not letting her recent success go to her head, however, she said she’s sticking to her process and keeping her mind on the task at hand.

“I don't want to like think about up any other wins -- even when I win the Indy Women in Tech -- I didn't think about the win. During the week I'm just trying to stay in the present. My goal for this year, I just want to focus on my present because it's too hard. I think it's harder than win the tournament.”

Hur might have a secret weapon at her disposal this week. Her husband, Kevin Wang, who she says rarely gets to attend LPGA events is in the gallery this week as he was for her wins in Scotland and Indianapolis. Hur’s parents are also in Chinese Taipei this week.