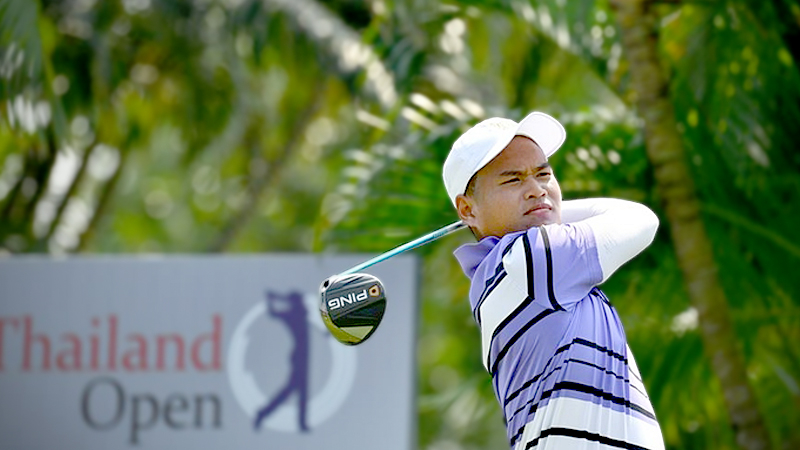 Unfancied Natthaphat Harnchokchaiskul stole the show at the US$300,000 Thailand Open on Thursday, opening his campaign with a solid seven-under-par 64 to grab a one-shot lead.

The 19-year-old Natthaphat, one of 10 amateurs in the field this week, received a late confirmation for the event on Sunday night but would find himself at the top of the leaderboard after firing eight birdies against a bogey at the Thai Country Club in Chachoengsao.

“This is the first time I’m playing in the Thailand Open. I was very excited when I received a call from the TGA [Thailand Golf Association] on Sunday night to say that I am in the tournament. I came here straight on Monday to practise. I would like to thank the TGA for giving me this opportunity,” said the teenager, who used to be a member of the Thailand Junior Golf Federation where he had won several Class A events before graduating two years ago.

“I played better than I expected. I thought it would be great if I can shoot under-par today. I really didn’t expect myself to play so well. I hit my approach shots very well today and my putting was good too. My driver wasn’t too bad as well. I managed to hit a lot of fairways,” added the teenager, who found 10 fairways and missed only one green in his solid round of 64. He needed only 28 putts around the greens.

“I have been practising hard for the Qualifying School on the local Tour so it’s a good time for me to get into the Thailand Open. I feel very honoured to be playing alongside the top Thai stars in the tournament this week,” said the Bangkokian, the last man in for the 2019 Thailand Open.

Starting from the first, Natthaphat reeled in four straight pars before nailing seven birdies in his next 11 holes. He stumbled with a bogey on 16 but bounced back swiftly with another birdie on 17 before closing with a par to take the lead for the first time in a professional tournament.

Another local young gun, Phachara Khongwatmai, impressed in his first attempt at tackling the course as he returned with a bogey-free round highlighted by six birdies to take second place at the National Open, which is co-sanctioned by the Asian Tour and the Thailand Golf Association.

“I thought the conditions were pretty difficult out there. The wind was quite strong and the direction changes. It’s an easy game for me today because I hit my driver well. This is my first time playing here at the Thai Country Club so to shoot a 65, I’m really happy,” said the 20-year-old Phachara, who came into prominence when he won the 2015 PGM CCM Rahman Putra Championship to become the youngest Asian Development Tour winner at the age of 15.

“I have never played here before. This course is pretty wide but if you’re not on the fairway, it can get very difficult. The greens are firm too. I am very happy with my round today. I hope I can hit my driver as well tomorrow,” he added.

Asian Tour Qualifying School graduate Aadil Bedi of India also kept the blemishes off his card to card a commendable 66 in his debut appearance at the Thailand Open. The 18-year-old shares third place with Thaya Limpipolpaibul of Thailand and Soomin Lee of Korea.

Singaporean veteran Mardan Mamat and American John Catlin, who hold a combined total of eight Asian Tour titles, were among those bunched in sixth place following matching rounds of 67s in the full-field event.

Defending champion Panuphol Pittayarat of Thailand had a round to forget after registering a 74 to tie for 110th place.

The Thailand Open marks the start of the Asian Tour’s 2019/20 Panasonic Swing, which is a ranking based on an aggregate points race that spans five events with the final top-three players chasing a share of a lucrative bonus pool.