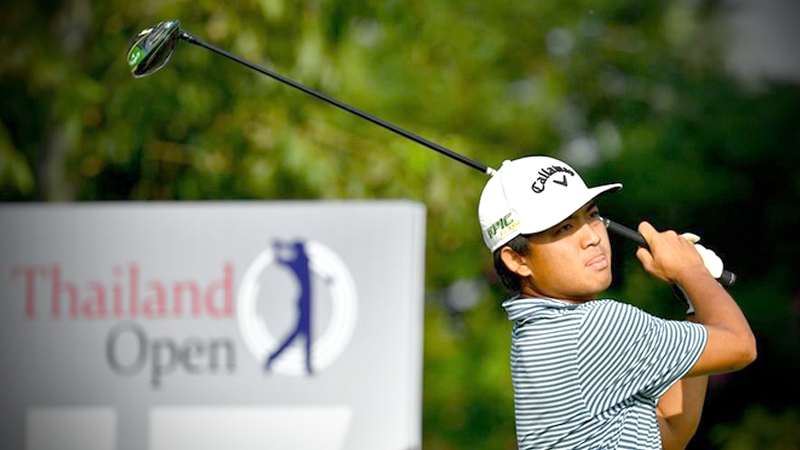 Chachoengsao - Thailand’s Poom Pattaropong rode a hot putter to sign for a six-under-par 65 and grab a share of the lead with local amateur Natthaphat Harnchokchaiskul at the halfway stage of the Thailand Open on Friday.

The 24-year-old Poom, who came through the Asian Tour Qualifying School last December, nailed eight birdies against two bogeys to equal the two-day efforts of overnight leader Natthaphat (70) on eight-under-par 134 total at the Thai Country Club.

"Everything just went my way today. I holed a lot of putts. I was sticking it close from the fairways so yeah, my approach shots were good," said Poom who finished fifth at the Asian Tour Qualifying School last December to secure his playing rights for the 2019 season.

"I shot three under on the front nine and luckily, I was able to keep it going heading into the back. I was just hitting it close to keep the momentum going. I'm just going to stick to my game plan tomorrow and just try to have fun out there because I've never been in this position before," added Poom who graduated from the James Madison University in the United States in December 2017.

Newly crowned Asian Tour champion Suradit Yongcharoenchai of Thailand continued his fine form by carding a 68 to move within two shots off the lead. He sits in seventh place alongside countryman Charng-Tai Sudsom (68) and Chinese Taipei’s Wang Wei-hsuan (69) on 135.

India’s Shiv Kapur, who opened his campaign with a 74, took a great leap forward after creating a new course record on the par-71 set-up with his blistering round of 63.

The 37-year-old Kapur settled three shots off the pace in tied-10th position with a host of players which include American John Catlin (70) and Phachara Khongwatmai (72) of Thailand.

The halfway cut was set at one-over par 143 with 78 players, included three amateurs, progressing into the weekend rounds.

The Thailand Open marks the start of the Asian Tour’s 2019/20 Panasonic Swing, which is a ranking based on an aggregate point race that spans five events with the final top-three players chasing a share of a lucrative bonus pool.