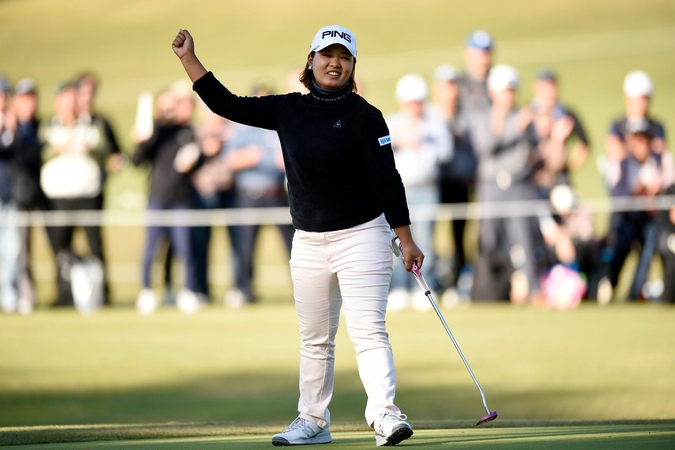 OTSU, JAPAN - NOVEMBER 09: Ai Suzuki of Japan celebrates the birdie on the 15th green during the second round of the TOTO Japan Classic at Seta Golf Course North Course on November 9, 2019 in Otsu, Shiga, Japan. (Photo by Matt Roberts/Getty Images)

JLPGA star Ai Suzuki came out of the gates on fire on Saturday at the 2019 TOTO Japan Classic. 14-time JLPGA winner Suzuki birdied the first three holes to take sole possession of the lead and never looked back as she finished with a bogey-free 65.

Suzuki will take a three-stroke lead over Gaby Lopez into the final round as she looks for her first career LPGA Tour title in her home country, but she knows no lead is safe on the LPGA Tour.

“I am always checking U.S. LPGA winning scores,” Suzuki said. “I have to shoot more than 3 under to win the tournament.  Usually winner scores low. Especially this week with this course, I think I have to play and score 5 to 6 under. That will be my target score tomorrow.”

LPGA Tour winner Lopez finished birdie-birdie to card a second-round 67 and secure a position in the final grouping on Sunday.

“It's key to be below the hole on every single green,” Lopez said of the Seta Golf Course. “Everything slopes back to front. The more you are putting uphill the more aggressive you can be. Sometimes it's hard just because it's slopey on the fairways. But, I mean, I think my caddie and I did a good job. I mean, I don't know. Tomorrow it's a whole different story. It's a new beginning, a new start. I'll do my best and we'll see.”

First-round co-leader Hannah Green fought back on Saturday with three birdies on the back nine to sit in a tie for third with Hyo Joo Kim at -8.

“It was a little rusty on the front nine,” Green said. “Didn't hit many fairways really all day. Never really gave myself any opportunities for birdie. Was, you know, leaving myself like putts where I needed to two-putt. But then the back end of the round I felt a lot more confident and I pushed myself to make sure I finished under par. It was nice to finish birdie, birdie today because I didn't do that yesterday.”

LOPEZ GETS INTO CONTENTION ON BIRTHDAY

“Having a birthday present with, you know, good couple of putts out there,” Lopez said. “I think maybe I just played a little bit more relaxed because I was happy to be able to do what I love. Playing on the LPGA, playing in Japan, my favorite country on my birthday, I mean, it couldn't get better than that. And having my boyfriend [Santiago Carranza] and my caddie [Alvaro Alonso] here, it just makes everything just much more special.”

Lopez will start the final round three shots behind leader Ai Suzuki, and she said with the TOTO Japan Classic being a 54-hole event it offers a different type of a challenge.

“I guess it requires a little bit more focus since the beginning. Like you got to put a low round since day one so you don't need to make up so many shots during the weekend. Maybe, you know, the tighter it gets the better I need to play since the beginning. That makes me kind of trigger my focus. Just, I don't know, be sharp since day one and be patient, because I know girls are -- I'm playing against the best players in the world. So, I mean, only thing I can do is control my mind, my emotions, and have a good attitude.”

In seven starts at the TOTO Japan Classic, major champion Shanshan Feng has never finished outside the top 30. She has four top-10 finishes including back-to-back wins at the event in 2016 and 2017 at the Taiheiyo Club. Through two rounds at the 2019 tournament, Feng is five shots behind leader Ai Suzuki at 7-under par and she said she likes the course set up at Seta.

“For three-day events you have to keep it going every day,” Feng said. “I love the Japanese courses. They're reasonable. Normally I think they're played a little bit shorter than what the LPGA does. But I think it's just fine. I think it's not a distance challenge. I think it's about the game, about the management, course management, and about the short game and accuracy.”

Feng said she is very comfortable playing in Japan, and on Sunday she will do her best to collect her sixth top-10 finish of the 2019 season.

“As an Asian player, of course food is very important and having Asian food here every day. And actually Japanese, they use our Chinese same characters so sometimes I can read. Like I might not be able to pronounce it, but I can read everything. So it makes me feel like I'm closer to home and feeling more comfortable over here.”

Suzuki would become eligible for LPGA Tour Membership; she could accept immediate Membership or take Membership for the 2020 season – she would have until Monday of the CME Group Tour Championship to make her decision

Gaby Lopez would earn her second career LPGA Tour win; and would capture titles at the penultimate event for the second-straight year