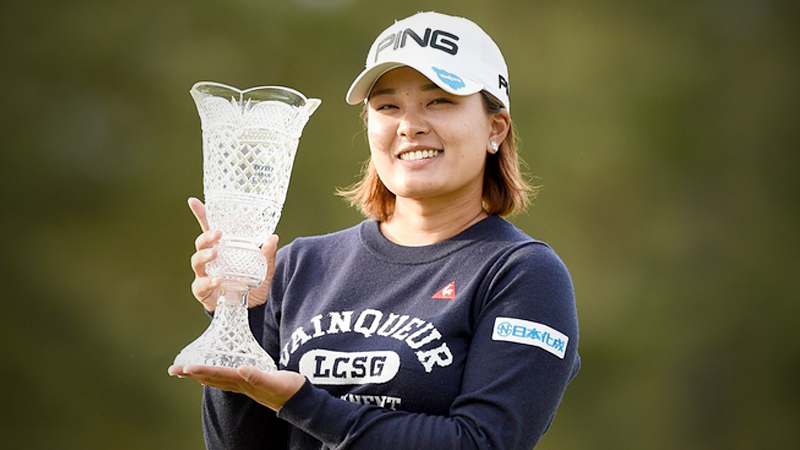 JLPGA star Ai Suzuki gave the fans in Japan a thrill on Sunday at the 2019 TOTO Japan Classic.

The 14-time JLPGA winner Suzuki played the final two rounds bogey-free and closed with a Sunday 67 to hold off any challengers and capture her first career LPGA title at 17-under par.

“Somehow, I am very settled, and my shot were solid,” Suzuki said through a translator. “So I did not have to worry about other players. I just have to play bogey free round. One thing I wanted to improve is to have some birdies on Sunday back nine. Because I think strong players are like that. I wish I can do that. It was my 15th win. This one is special because US LPGA tour event. It’s beyond Japan, and International Event.”

LPGA major champion Hyo Joo Kim made a late charge playing alongside Suzuki as she birdied her last three holes for her 12th top-10 finish of the season and third runner-up result finishing at 14-under par.

“Next week I will practice more, and then workout a bit hopefully same for CME, top 10,” Kim said of her goals for the upcoming season-ending CME Group Tour Championship.

Minjee Lee posted a final-round 68 to finish at 11-under par and collect her second-straight top-three finish.

“Obviously would be nice to win, but we were pretty much playing for second, I think, so I just tried to make as many birdies as I could out there and just play my game,” Lee said of the final round in Japan.

2019 LPGA Tour rookie Jennifer Kupcho came out firing on Sunday with five birdies on her first seven holes, she cooled off to post a 68 and finish in a tie for fourth with Jing Yan for her third top-five finish of the season. Afterwards Kupcho said she was really pleased to finish off her first Asia swing with a good result and head into the CME Group Tour Championship with a bit of momentum.

“I was hitting the ball really well. Gave myself a lot putts. I even missed a couple, left them on the lip,” Kupcho said. “I played really well this week and I'm pretty happy with it…It’s been really cool just to see all the different countries and different cultures. It's definitely something I would've never dreamed of. It's pretty cool to be able to see it all.”

Early in the afternoon on Sunday Morgan Pressel had the Seta Golf Course on high alert as she made birdies on her first five holes. Pressel would make the turn in 29 before stumbling with three straight bogeys on holes 13-15. Her hot start was enough to keep her tied for 10th at -8 alongside Azahara Munoz and Hannah Green, for her second straight top-10 finish.

“I really haven't had my A game for the whole trip, but proud of the way I've grinded it out the last two weeks,” Pressel said. “I don't know if it'll be a top 10 this week, close to top 10 last week, so definitely proud of the way that we fought out there.”

“It was my dream so I feel like I want to challenge,” Suzuki said. “But I can’t speak English. And I need to talk to my family because I need their support. I am not good in Moving around, travelling, and food. 70% I want to but considering all that, It’s 20%. First thing is that I want to be Money winner and want to play ANA inspiration.”

If she chooses not to join the LPGA in 2020, she is eligible for a maximum of six sponsor invitations in 2020, plus she can compete in all five major championships and the HSBC Women’s World Championship. She would not gain entry into the 2020 Diamond Resorts Tournament of Champions.

The season-long Aon Risk Reward Challenge highlight's the world's best professional golfers as they tackle the most strategically challenging holes across both the LPGA Tour and PGA TOUR schedules. The player from each Tour on top of the Aon leaderboard at the end of the regular season will receive a $1 million prize.

The TOTO Japan Classic was the final qualifying event for the season-long competition. Entering the week Carlota Ciganda led the standings at -0.841, with Ariya Jutanugarn in second at -0.808 and In-Kyung Kim and Lee-Anne Pace in third at -0.731. Jutanugarn needed two eagles (score to par equal to -4) to pass Ciganda and win the Aon Risk Reward Challenge, while Kim needed an improbable combination of eagle/double eagle.

Jutanugarn played the 476-yard par-5 17th hole at the TOTO Japan Classic par-birdie-eagle while Kim made two pars and a birdie.

The scoring system is identical on both the LPGA Tour and PGA TOUR, and players take their best two scores from each Aon Risk Reward Challenge hole, with the winners having the best average score to par at the end of the season. Players must play a minimum of 40 rounds throughout the season. The Challenge runs across regular season tournaments (29 LPGA Tour; 36 PGA TOUR).

RACE TO THE CME GLOBE FINALE

The 2019 LPGA Tour season brings a fresh face to the Race to the CME Globe. LPGA Members will accumulate points at each official LPGA Tour event leading up to the CME Group Tour Championship. The top 60 points earners and ties will then earn a spot in the CME Group Tour Championship, with the entire field competing for the $5 million purse and the $1.5 million winner’s check, the largest single prize in the history of women’s golf.

This week’s TOTO Japan Classic was the final chance for players to earn a spot in the CME Group Tour Championship. Entering the week there were five players who could play their way into the season-ending event based on their finish at the TOTO Japan Classic: In-Kyung Kim, Pornanong Phatlum, Sakura Yokomine, Gerina Piller and Mel Reid.

Information on the Race to the CME Globe and the CME Group Tour Championship can be viewed: https://www.lpga.com/race-to-cme-globe

Rei Matsuda’s first-round ace during the TOTO Japan Classic was the 32nd hole-in-one this season. That translated to $640,000 donated thus far to St. Jude Children’s Research Hospital. This more than covers the average cost of $425,000 needed to treat a pediatric cancer patient.