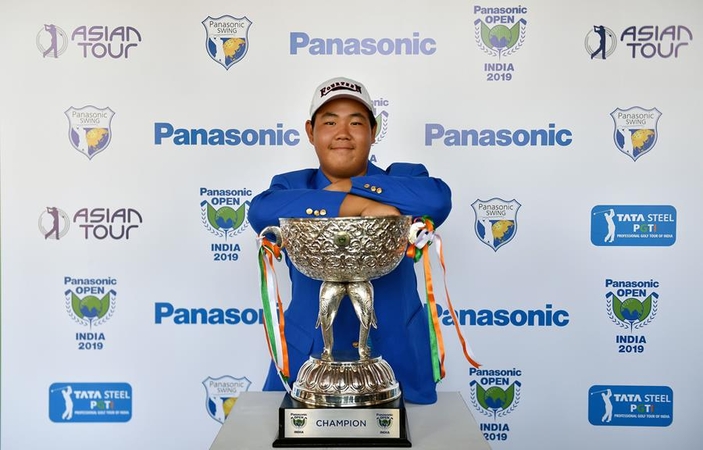 Gurgaon -  Korea’s Joohyung Kim became the second youngest Asian Tour winner when he fired a seven-under-par 65 to clinch the Panasonic Open India title by one shot on Sunday.

Having earned his Asian Tour card for the remainder of the 2019 season after claiming three wins on the Asian Development Tour (ADT) this year, the 17-year-old showed he is primed for the big leagues.

The Korean was making what was only his third start on the Asian Tour this year. But he produced another grandstand performance that belies his age with rounds of 70, 68 and 65 for a winning total of 13-under-par 203.

"I’m really speechless. It has been a dream of mine to play on the Asian Tour ever since I was young. And it’s really wonderful to come here, be in contention and win. I cannot describe the feeling now. I’m still trying to learn every single step of the way," said Kim, the second youngest player to win on the Asian Tour at 17 years and 149 days Thailand’s Chinnarat Phadungsil holds the record as the youngest winner at 17 years, five days when he won the Double A International Open in 2005.

India’s Shiv Kapur was denied another victory on home soil as a costly double-bogey seven on his closing hole meant he would end the tournament in a share of second place with compatriot Chikkarangappa S. at the US$400,000 event which was contested over 54 holes at the Classic Golf and Country Club.

Australia’s Terry Pilkadaris, who held a share of the overnight lead, signed for a 71 to finish in outright fourth place while Indonesia’s Rory Hie was tied for fifth with Chinese Taipei’s Hung Chie-yao and India’s Vikrant Chopra.

Hie created history by becoming the first Indonesian to win on the Asian Tour just six weeks ago at the Classic Golf and Country Club.

Leading Scores after round 3 of the Panasonic Open India 2019 being played at the par 72, 7114 Yards Classic Golf and Country Club course (am - denotes amateur):