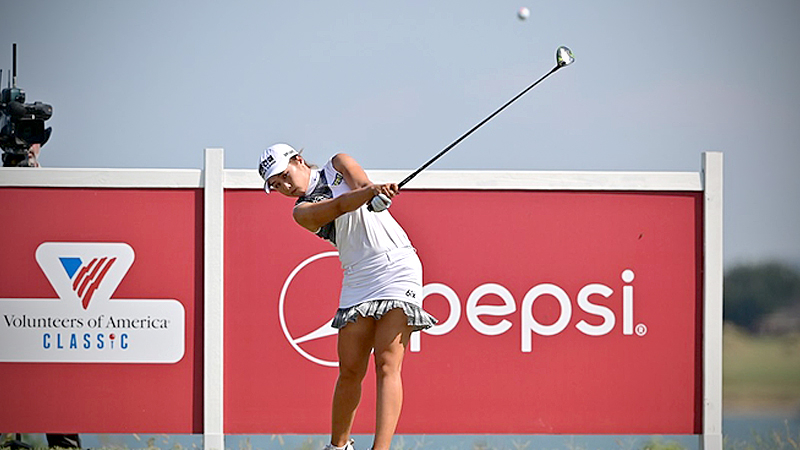 For Kristen Gillman, Cheyenne Knight, Jennifer Kupcho and Jeongeun Lee6, the CME Group Tour Championship is one last new experience to add onto a season of memories.

The four 2019 LPGA Tour rookies teeing it up for the first time in Naples this week are excited to be vying for the $1.5 million winner’s check in the season-ending event.

Lee6 was the first of the 2019 rookie class to find LPGA Tour success, making a splash by winning major glory at the U.S. Women’s Open just three weeks after she lost in a playoff at the LPGA MEDIHEAL Championship. But as the season went on and the travel miles grew longer, Lee6 could feel the strain on both her game and her body. So while she clinched Rolex Louise Suggs Rookie of the Year honors with five events remaining in the season, Lee6 sees where she needs to change up her gameplan heading into her second season on the LPGA Tour.

“After winning the (U.S. Women’s Open), I started to feel a little bit more exhausted and my scores weren't that very consistent just like before,” said Lee6. “I just think that I played so many tournaments, most of the tournaments. But for next year I'm just going to manage myself to save some energy and prepare for the next tournament.”

Knight became a Rolex First-Time winner at the Volunteers of America Classic, a moment that changed the course of the rest of her season. Instead of fighting to secure her card at the LPGA Q-Series presented by Blue Cross Blue Shield of North Carolina, the 22-year-old booked tickets to two tournaments on the Tour’s Asia swing. Knight said the win was not only the highlight of her professional career, but a life-changing opportunity.

“It is life changing. It opened like a lot of doors for me. And I think like how hard my rookie year was. Like so many like downs, and then that, kind of the light at the end of the tunnel. I never thought -- I mean, it's everyone's dream to win an LPGA event,” said Knight.

Gillman finished second in the Louise Suggs Rolex Rookie of the Year standings after a consistent rookie campaign. She earned four top-10 finishes including a tie for third at the Buick LPGA Shanghai, and said she learned a lot about herself as a competitor and person in her first year on the Tour.

“I think some of the things I've learned most out here is just you kind of can't focus too much on golf because then it's going to be miserable out here and just always worrying about your score and your place and all that,” said Gillman. “I've kind of just learned to just go out there and have fun. That's usually whenever you play best.”

Kupcho made her professional debut at the U.S. Women’s Open after deferring her LPGA Tour status until after her college season at Wake Forest University. The inaugural Augusta National Women’s Amateur champion made a splash on Tour, compiling three top-five finishes including a tie for second at the Evian Championship. She said it took time, but eventually took the advice given to her by many other professionals on tour.

“The big advice I got was don't overwork yourself and to relax, because I'm pretty hard on myself a lot,” said Kupcho. “I think I've definitely changed throughout the year. I started out not taking that advice and now I've taken it. So definitely makes life a lot more enjoyable before and after golf.”

ALL ABOUT TEAM FOR BROOKE HENDERSON

There are numerous players on the LPGA Tour with stories exemplifying “Little Girls, Big Dreams” coined by the LPGA-USGA Girls Golf program, and their careers have blossomed as they continue to grow up in front of golf fans worldwide. One such star is Brooke Henderson, a 22-year-old native to the small town of Smiths Falls, Ontario, Canada, who comes to the CME Group Tour Championship at No. 2 in the Race to the CME Globe.

For Henderson, arriving in Naples, Fla., as a top contender and reflecting on her journey to this point is all more than she could have ever imagined.

“Honestly, the last five years have been a dream come true,” said Henderson, a two-time 2019 winner. “I never could have asked for any of this. I’m just so grateful for my team. We work really hard, set lofty goals and try to chase after them. It’s hard to believe that I’ve come to this position. My parents sacrificed a lot so we could live this life, my sister works really hard. We’ve all worked hard for this.”

Each step on Henderson’s path since joining the professional ranks has been guided by goals. That is no different in her fifth year on Tour with several process-oriented marks leading the way, primarily scoring average. Currently ranked No. 4 in the category at 69.606 across 94 rounds, Henderson is 72 holes away from keeping that number under 70, which she started the year hoping to accomplish.

Furthermore, the final tournament on the LPGA calendar is Henderson’s 27th event played in 2019. It is also her lowest total since 2015, when she made 14 total starts and opened the year as a non-member before capturing the Cambia Portland Classic title. Even so, the winningest Canadian in professional golf history with nine victories to her name points to the goals and starts as all being part of the process.

“Definitely got me well rested for the rest of the year,” said Henderson. “I feel like we were strategic in the ones we took off leading into the majors. We tried to make sure I was peaking. Even though it didn’t work out as well as we would have liked, I feel like I had a really solid year. I feel like every year, my whole team, myself, we just keep getting smarter and better. Hopefully that trend can continue.”

Ariya Jutanugarn rewrote history when she recorded her 19th and 20th eagles at the Buick LPGA Shanghai to pass Laura Davies for most eagles in a season. Jutanugarn has recorded 22 eagles with one event left in the 2019 season. Davies’ old record of 19 was set in 2004. Carlota Ciganda has tied Davies with 19 eagles in 2019. Ciganda recorded nine eagles on the Aon Risk Reward Challenge holes, one more than Jutanugarn, which led to her becoming this year’s winner of the $1 million bonus.

Jin Young Ko is in good position to earn the lowest scoring average of the season and win the Vare Trophy. Ko holds a large lead – three tenths – over Hyo Joo Kim in scoring average. Kim needs to be 22 to 23 strokes better than Ko at Tiburon Golf Club. For the record books, Ko needs to be 1-over par or better in all four rounds at the CME Group Tour Championship to give her the lowest scoring average by a Korean player in LPGA Tour history. Sung Hyun Park currently holds that record with an average of 69.2471 recorded in 2017.

Anne van Dam is currently driving the ball an average of 284 yards, 25 yards farther than the average LPGA Tour driving distance of 259 yards. Maria Fassi is the only player other than van Dam who has averaged more than 280 yards per drive for the season. Van Dam and Fassi will make LPGA history in 2019 as only two other players have ever ended the season above this mark – Joanna Klatten in 2016 (281 yards) and Karin Sjodin in 2006 (284 yards).  Angel Yin ranks fourth in average driving distance at 279 yards.

The top 10 players on the 2019 LPGA Official Money List have a chance at the money title at the CME Group Tour Championship. Jin Young Ko leads Jeongeun Lee6 by more than $720,000. There are several scenarios for Ko to win the money title. If Jeongeun Lee6 wins the season-finale, she wins the money title. The other eight players who trail Ko must win and are dependent upon Ko’s finish at the tournament.

Tournament volunteer Bill Young admits he will be watching to see which LPGA Tour players take a swing at the meticulously stacked pyramids of range balls at this week’s CME Group Tour Championship.

That’s because the practice-range volunteers at the CME event add a special touch to the stacks of 91 range balls each day.

“Those pyramid-shaped stacks of balls have one ball at the very top, so what we do is carefully balance one more single ball on top of it,” said Young, the tournament’s driving range chairman. “Sometimes the players will walk up and hit that single ball off the top of the stack.”

Perhaps for his attention to detail, Young has been named as the CME Group Tour Championship’s 2019 AXA LPGA Volunteer Service Award Winner. He will be recognized this week as one of the exemplary volunteers identified at each of the LPGA Tour events this season.