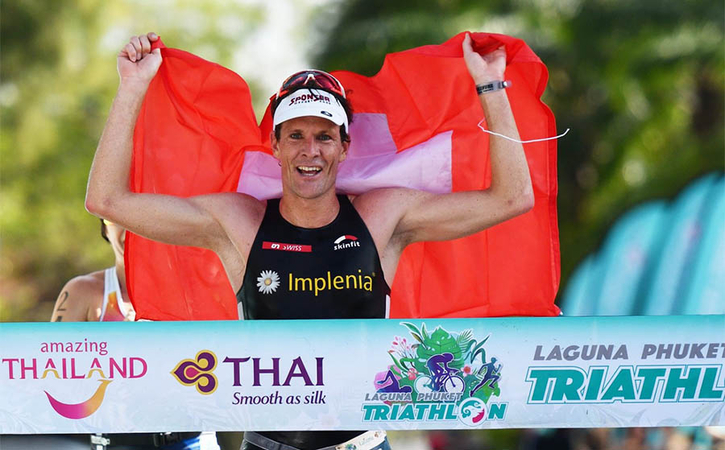 Stellar performances by Switzerland’s Ruedi Wild and Imogen Simmonds delivered them the glory at the 26th Laguna Phuket Triathlon on Sunday (November 24), Wild in the overall standings and Simmonds in the women’s field.

Finishing first to claim his third LPT championship, Wild crossed the finish line at 02:21:07, less than two minutes before his toughest contender, Michael Raelert of Germany, another three-time LPT winner. In third place was Krzysztof Hadas of Poland, with a time of 02:26:20.

The transition area was at Laguna Grove in the heart of the Laguna Phuket.

Participants plunged into the Andaman Sea from the resort’s beachfront under comfortable with mild weather and small waves. The cycling and running became challenging once the Phuket heat kicked in.

“It felt amazing today,” said Wild. “LPT is like home away from home for me. I feel very good here with all the people and great memories from the past, especially winning for the third time after a good performance. I’m really happy and hope to come back again next year!”

Wild said he started with a good swim knowing that Raelert would try to open a gap between him and the rest of the field.

“I managed to keep in contact with him and we both pushed really hard at the beginning of the bike, so we were able to get away and benefit from leading the field from then on. I was able to make a gap and secure the lead in the first 2-3km of the run, so it helped when I reached the last few kilometres, which are always really tough to get through in the heat.”

Simmonds said she felt “a bit overwhelmed” by her triumph.

“There was some strong competition out there today, so I decided to push hard in the very beginning and the strategy paid off. I had a bit of a gap in the run, so it was just the challenge of finishing in the heat. It was amazing to come back to LPT and finish the year off with a good race. The crowd were amazing out there supporting us, and all the volunteers were absolutely incredible, so thank you!”

Wowing the Thai crowd were the defending champions. Jaray Jearanai in the men’s field was once again the first Thai to finish, with 02:39:38, claiming his ninth consecutive LPT win since 2011.

In the women’s field, defending her title as top Thai female, was Nichakarn Ruttanaporn, in 03:17:06. It was her fourth consecutive victory.

The LPT Charity Fun Run on Saturday had 1,100 runners in the 2km Kids, 5km and 10km categories raising funds for the Children First Fund in support of seven orphanages in Phuket and the Kao Kon La Kao Foundation, which helps hospitals in Thailand.