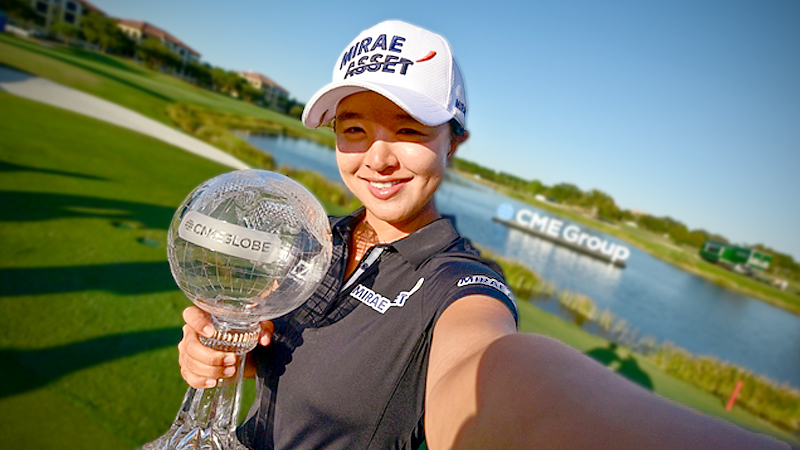 Sei Young Kim walked to the 18th green of the CME Group Tour Championship looking at a 25-foot birdie putt.

There was no hesitation in her stroke. Before the ball got to the hole, Kim had her putter raised to the sky. And when it dropped into the left edge of the hole, she pumped her fists in victory. With that putt, Kim reached -18 and won her third title of the 2019 LPGA Tour season, a nail-biting one-stroke victory over England’s Charley Hull, who also birdied 18, and a two-stroke margin over the American duo of Danielle Kang and Nelly Korda.

“Last putt, I just tried to make two-putt because I didn't see the leaderboard. I didn't know that if I made a two-putt it could be go to playoff,” said Kim, who led wire to wire. “So I just try and make the right distance; made it. It's unbelievable. I was like so emotional. Almost crying. But I try I'm not going to cry. So, yeah, I'm still unbelievable, yeah.”

With the win, Kim earned her 10th career victory and reached the winner’s circle for the third time this year, her first three-win season. She became the the fourth Korean player with at least 10 LPGA wins, joining Inbee Park (19), Se Ri Pak (25) and Jiyai Shin (11), and is the 31st player in LPGA history to cross the $8 million mark in career earnings with $8,666,676.

Hull shot back-to-back 66s on the weekend to earn solo second, her best finish of the 2019 season. She birdied 12 and 13 to pull within two strokes of the lead and then birdied the final three holes to pull into a tie for the lead. But as she kept warm on the putting green, she heard the roar from 18 when Kim made her winning putt.

“I feel pretty happy considering the first day after the first hole I was 2-over par because I started with a seven,” said Hull, who is off to her honeymoon next week after getting married on Sept. 21. “To finish 17-under, and I know just missed by one, but it was so close.”

Kang shot the round of the day on Sunday, carding a bogey-free 7-under 65 to jump into a tie for third. After making an eagle at the par-5 17th to pull one stroke behind Kim, her birdie putt at No. 18 came up two rolls short of falling. Korda, who started the day one stroke off Kim’s lead, could not keep up with the fireworks going on around her, but also birdied the final hole to tie Kang for third.

When she made the turn in the final round of the CME Group Tour Championship, Charley Hull was five shots back of the lead at 12-under overall. Needless to say, she wasn’t out of it.

“On 15 I looked at the leaderboard and thought I’ve got a chance here if I birdie in,” said Hull, who fired a 6-under 66 this afternoon. “Didn’t birdie 15, but birdied 16, 17, 18 and gave it my best shot. I’m pretty happy considering the first day after the first hole I was 2-over par because I started with a seven. To finish at 17-under and know I just missed by one, it was so close.”

Hull is now off to create more memories in a year where she captured seven top-20s, played an integral role in Team Europe’s victory at the Solheim Cup and got married to MMA champion Ozzie Smith.

“Going on my honeymoon on Friday, Dubai for two days then the Maldives,” Hull said. “I think the whole tournament is a great event for women’s golf and just nice to finish the year with a big event like this.”

DANIELLE KANG STORMS LEADERBOARD DURING FINAL ROUND IN NAPLES

“It’s never over until it’s over, right?”

This was Danielle Kang’s mindset heading into the final round of the CME Group Tour Championship. Seven shots back of the lead and T9 to start the day, Kang laid it all on the line to pursue the $1.5 million winner’s check. She walked off the 18th green after firing a 65, the day’s low round, to sit at -16. She birdied five holes on the front nine and eagled No. 17 to hold the clubhouse lead, one stroke behind Sei Young Kim.

“Thought process was give everything I've got out there and see what happens,” said Kang.

As she posted up at the clubhouse to await her fate, the television broadcast spoiled the ending. Charley Hull birdied her final three holes on a bogey-free day to finish just ahead of Kang at -17 and knock her out of contention. She walked back outside with a hint of disappointment but was still smiling and impressed with a spectacular final day.

“Honestly I started off pretty far back. I just kind of made a charge in the beginning, and I knew that I had a chance. The first few holes are tough, so as long as I shaved off a couple of shots starting off, I think I had a chance,” said Kang. “I think I did a pretty good job. My putter got a little bit cold on the back nine; it was a great eagle on 17. At the end of the day, I gave myself a lot of opportunities and I think that's what I'm mostly proud of.”

NELLY KORDA BATTLES THROUGH ROLLERCOASTER ROUND FOR TOP THREE FINISH

Nelly Korda started the last day of the CME Group Tour Championship in the final pairing alongside Sei Young Kim and Caroline Masson, chasing down Kim’s one-stroke lead. By the end of the round, Korda pushed through three bogeys to shoot a 71 and finished T3 at -16, her third third-place finish of the season.

“I was hitting it really bad today actually, especially with my driver. I think I had three penalty strokes. I hit it twice in the water, and then I took an unplayable on one of the other holes,” said Korda. “It's unfortunate. I mean, I think the one on the par-5 on the back nine I was just so frustrated there already. I mean, I kind of kept my head in it. I didn't get over par even though I was really struggling. I kept trying to be aggressive. Sometimes I did make a mistake because I was too aggressive.”

The Rolex Rankings No. 3 started on a consistent pace, with a birdie and seven pars through her first eight holes. On No. 9, a shot into the water forced her first penalty of the day. After recovering with a birdie on No. 10, Korda’s tee shot on No. 11 landed left of the fairway in the pine-straw against the root of a bush. She took an unplayable and finished the hole with a bogey, but dispelled any frustrations with a birdie later at No. 13.

After another bogey on No. 14, she had one shot to finish under-par on the day at No. 18 – a shot that capped off a turbulent day. “To make a long birdie on the last hole to cap off my season felt really good,” said Korda.

She said she was motived through most of the round by her caddie Jason McDede, who is engaged to Masson. Despite a tough last day of the season, Korda said she was already looking ahead to her future on the LPGA Tour.

“I'm really happy with it definitely. I checked a couple things off of my goals,” said Korda. “But now it's time to get ready for 2020 season. I'm going to rest for a couple days, maybe two weeks, and get together with my team. Hopefully I can build from this season going into the next.”

The CME Group Cares Challenge is a season-long charitable giving program that turns aces into donations. CME Group donated $20,000 for each hole-in-one made on the LPGA Tour in 2019, with a minimum guaranteed donation of $500,000 to St. Jude Children's Research Hospital, which is leading the way the world understands, treats and defeats childhood cancer and other life-threatening diseases.

The 2019 LPGA Tour season saw 31 aces from 32 different players, for a total of $620,000 donated to St. Jude Children’s Research Hospital. This more than covers the average cost of $425,000 needed to treat a pediatric cancer patient.