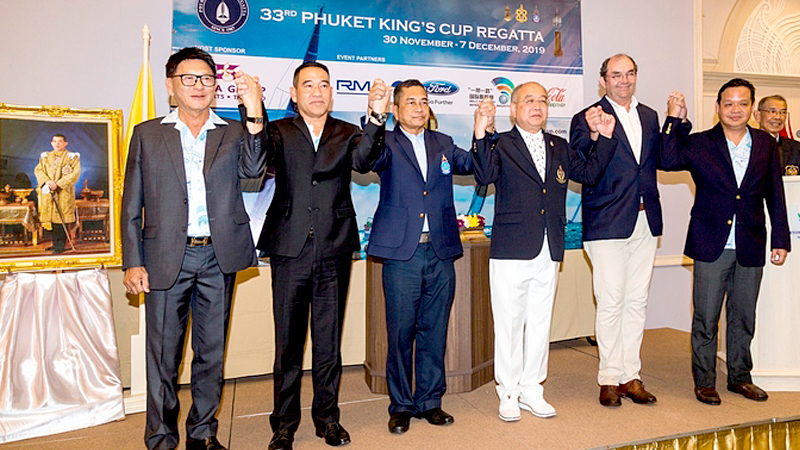 With 10 classes of Keelboats and Multihulls and six International Dinghy Classes, and the new IOMC class, the regatta aims to grow sustainable sailing communities and help develop the skills of a new wave of sailors and reaffirm Phuket as the hub for Asian Water Sports and Marine tourism.

Kevin Whitcraft, president of the Organising Committee, said: “We are delighted to welcome all international and Thai sailors to the 33rd Phuket King’s Cup Regatta. For 2019 and in past years, we have had a special focus on growing the dinghy components of our overall regatta, as the sport of continues to grow in popularity here. The International Dinghy fleet isa fast-growing racing programme designed to promote and encourage youth sailing in Thailand. In the 33 years since its inception, the Phuket King’s Cup Regatta has gained a reputation as both a highly competitive event on the water featuring some of the world’s best boats, skippers and crews, as well as a social function where visitors enjoy the traditional warm Thai hospitality in one of the best holiday destinations in the world.”

“This year is the biggest Premier Class we’ve had for many years,” added Race director Simon James. “The biggest yacht in this year’s regatta is the Singapore-registered Team Spirit (Swan 90). There will be three IRC Racing Classes, split on design and performance, while the Modern Classics will combine with the Cruising Class. The Multihull Racing will be split into two classes, high performance and cruising.”

The comprehensive classes with more than 100 competitors contested by the International Dinghy fleet are Optimist Boys and Girls, Laser 4.7 (Mixed), Laser Standard, Laser Radial and 420.

Appearing for the first time at this year’s regatta is the International One Metre Class (from December 4-7) that has attracted many foreign competitors and is also open to disabled sailors. The IOMC is being organised by the committee of the Phuket King’s Cup Regatta under the auspices of the Royal Varuna Yacht Club in conjunction with the Yacht Racing Association of Thailand, the Royal Thai Navy, the Province of Phuket, Thailand RC Sailboat and the International One Meter Class Association (IOMICA).

Phuket Governor Pakapong Tawipat said “As a Mecca for marine and sports tourism hub, Phuket is pleased to welcome all Thai and international sailors and visitors to the 33rd Phuket King’s Cup Regatta. Phuket is a world renowned beach destination. Recently Phuket Town was named one of Asia’s most picturesque towns by CNN and also has been included in the ‘World’s Best Places to Visit’ and ‘Best Places to Visit in Asia’ 2019 rankings released by the U. News & World Report. These recognitions reaffirm that Thailand and Phuket province continue to offer visitors from around the globe memorable holiday experiences with world-class hotels and restaurants and our yacht and boat building and charter businesses are first rate. We hope that our sailors and visitors enjoy the warm hospitality and high-quality leisure experiences of Phuket province.”

Kata Group Resorts Founder and President Pramookpisitt Achariyachai added: “Kata Group Resorts is once again honored to support the Phuket King’s Cup Regatta. Kata Group Resorts has been a prominent player in the hospitality industry in Thailand since 1980, making it one of the kingdom’s longest established hotel operators, with a collection of properties in highly desirable and prime beach locations. Our family oriented Beyond Resort Kata has been the traditional home to the Phuket King’s Cup Regatta for 23 years, offering genuine Thai hospitality and high- quality leisure experiences to guests. We, therefore, look forward to welcoming our sailing friends and new arrivals and we hope you enjoy our warm hospitality.”