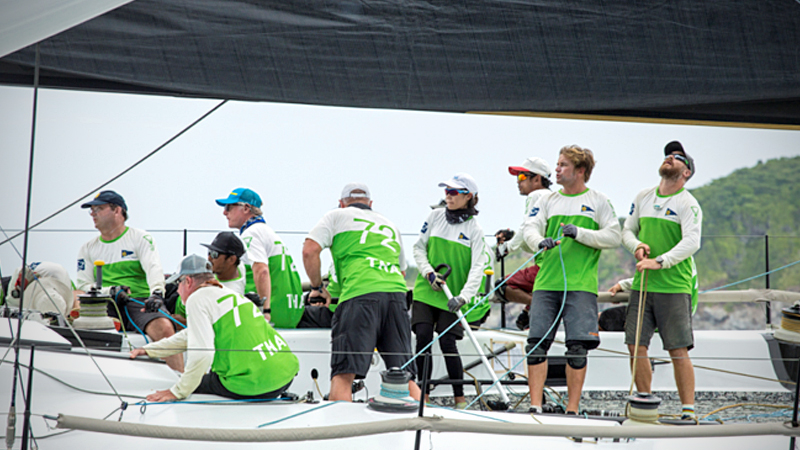 Roberts, an Australian businessman and a veteran in the Asian yachting circuit, finished first in the two races held on Tuesday on his boat Team Hollywood, a big improvement on his second and third place finishes on the first day of racing.

Very little separated the five boats contesting the class on Tuesday, but as the wind picked up speed to 10-12 knots with gusts up to 19 knots as the boats made their way around some islands off Phuket in the final race of the day, tactics were the key.

With so little separating the five boats in the leading class, Noppakao’s experience may prove to be the edge the Thai boat needs by the time the last races are held on Saturday.

“Thank you to the Whitcraft family for giving me the opportunity to sail on their boat,” she said. “I think we did very well today, and I feel happy about that. I think we will keep improving every day.”

In the IRC 1 class, Russian helmsman Alexey Mashkin steered MegaZip to a third and first place on Tuesday for the provisional overall lead. Australian Larry Dean on Fujin was second overall, with fellow Aussie Craig Nicholls on Aquarii in third place.

Despite being one of the smallest boats in the IRC 2 class, Morten Jakobsen steered his Thai-registered boat Over Here into first place overall after a first and third place in Tuesday’s two races.

China’s Shen Sheng was second overall aboard Kata Rocks BigBoys Sailing Team, while the Royal Thai Naval Academy finished third. Experienced sailor Veerasit Puangnak was at the helm of the Royal Thai Navy boat, which this year was crewed by cadet sailors, who are expected to improve with every outing. Their first place in the final race of the day showed how quickly the cadets are learning the ropes.

Britain’s John Newnham leads the Firefly 850 Sports class on Twin Sharks, followed by the Thai-registered Voodoo with Hans Rahmann at the helm and Neil Aye from Great Britain on Mamba in third place.

The waters off Phuket are set to become even more crowded on Wednesday when 24 one-metre radio-controlled boats start four days of racing for the first time with the Phuket King’s Cup Regatta, as well as 120 young sailors, who will be contesting the International Dinghy Fleet.

An international field will pilot the radio-controlled boats, with competitors from Thailand, Malaysia, Singapore, Australia and China.

With regatta organisers keen to promote sailing among the country’s youth, the comprehensive classes which start on Wednesday off Kata Beach will involve 120 young competitors who will contest the Optimist Boys and Girls, Laser 4.7 (Mixed), Laser Standard, Laser Radial and 420 classes.

The Phuket King’s Cup Regatta is organised by the Phuket King's Cup Regatta Organising Committee under the auspices of the Royal Varuna Yacht Club, in conjunction with the Yacht Racing Association of Thailand, the Royal Thai Navy and the Province of Phuket.

There will be five days of racing for keelboats and multihulls, with a reserve day on Thursday, December 5. For the International Dinghy classes and the IOMC class, four consecutive days of racing will start from Wednesday.