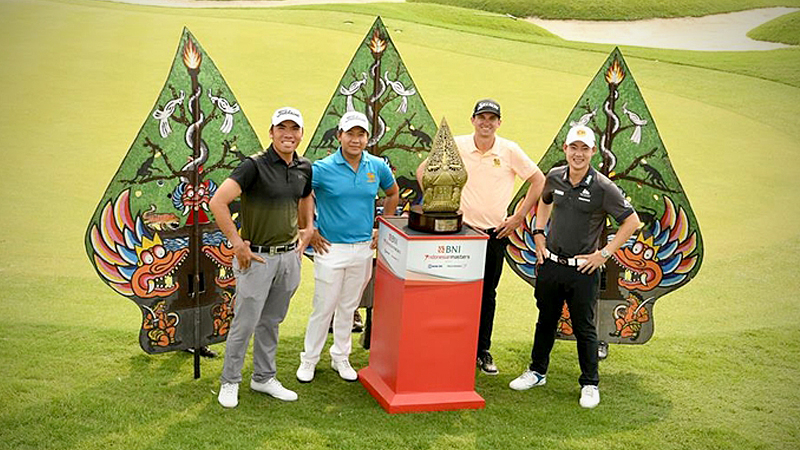 Rory Hie of Indonesia, Poom Saksansin of Thailand, John Catlin of the United States and Jazz Janewattananond of Thailand.

Thailand’s Poom Saksansin will set his sights on completing a hat-trick when he takes on the elite field at the BNI Indonesian Masters supported by Bank BRI and MedcoEnergi which starts on Thursday.

Poom, a two-time winner of the BNI Indonesian Masters in 2016 and 2018, returns to his happy hunting ground at the Royale Jakarta Golf Club this week, bidding to equal Lee Westwood’s record of having three victories in the US$750,000 Asian Tour event.

The 26-year-old Thai hopes to renew his affinity with the course as he takes aim at a fine showing to redeem himself from a lacklustre season where he had made only five cuts in 11 starts to sit in 59th place on the current Asian Tour Order of Merit.

He will headline the talented 144-man field from 21 countries alongside countryman and newly minted Order of Merit champion Jazz Janewattananond, as well as American John Catlin and local hero Rory Hie, who have all won on Tour this season.

“I am very happy to be back glad. I haven’t had a good season to be honest but I hope to regain my confidence with a good result this week. I love the greens here and I feel familiar with the type of grass here,” said Poom, who will be chasing for a hat-trick to match Lee Westwood’s winning record in the tournament.

“I will try and do my best again. Hopefully I can defend my title successfully. That will be a great boost to my confidence. The game is getting better. I feel like I can play better now, compared to the earlier in the year,” added Poom who fended off the challenges from his more illustrious rivals included Justin Rose and Henrik Stensonto to win the Indonesian Masters by three shots for his third Asian Tour victory last year.

Jazz, the highest-ranked player in the field at 57th place on the Official World Golf Ranking (OWGR), will have the goal of breaking into the world’s top-50 at the back of his mind when he tees up for the popular event, where he came in runner-up 12 months ago.

“This week is quite an important week for me. Even though I have won the Order of Merit already, I still have a bonus to play for and that is to try and break into top-50 on the world rankings before the year ends,” said Jazz.

Catlin, who claimed his fourth Asian Tour title in Thailand last month, will be looking to improve on his tied-17th place finish last year when he resumes his chase for more glory at the event, which forms the third leg of the 2019/20 Panasonic Swing.

Hie reckoned the pressure to perform well in front of his home crowd will not get to him this week, having already won his first Asian Tour title in India three months ago. The 31-year-old, however, will have to battle with a recovering thumb injury when he spearheads the 26-man strong local charge at the Indonesian showpiece.

By being the flagship event of the Asian Tour, the BNI Indonesian Masters will award the winner with no less than 20 Official World Golf Ranking (OWGR) points, ensuring more players benefit from the points breakdown.

The 2019 BNI Indonesian Masters, which is celebrating its ninth straight edition on the Asian Tour this week, will be the penultimate event of the 2019 season.

The winner of the event will again receive a coveted spot in the World Golf Championships – FedEx St. Jude Invitational in 2020.