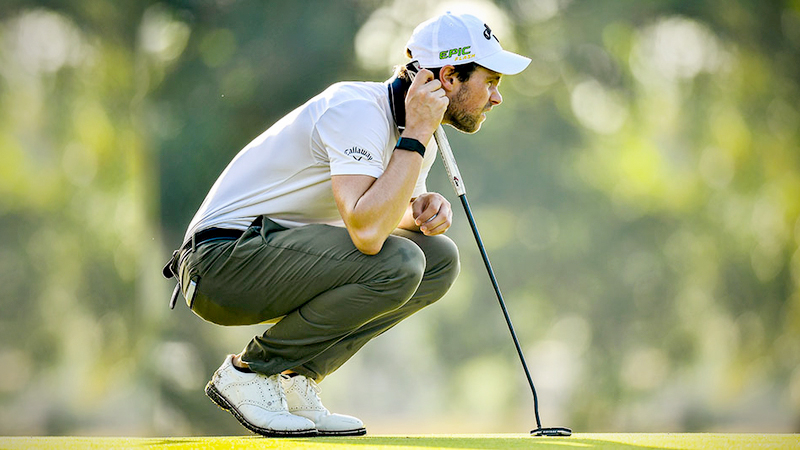 Pattaya - Belgium's rising golf star Thomas Detry took Pattaya's heat in his stride to shoot a stunning 63 and grab the opening-round lead in the star-studded Thailand Masters at the Phoenix Gold Golf and Country Club on Thursday.

Ranked Belgium’s Best Amateur golfer in 2013 and 2015, Detry sprinkled his round with five birdies on the front nine and three on the back to grab a one-shot lead over hometown player Settee Prakongvech, who lives in Chonburi downtown.

“The weather is horrible at home,” said the 26-year-old who won the 2018 World Cup of Golf with good friend Thomas Pieters in Melbourne. “I got invited to play here and Thongchai is taking good care of me. The weather is fantastic and the golf course is beautiful. It couldn’t be better to start with eight-under today,” added Detry, a first-time traveller to Thailand.

Belgian rising star Thomas Detry grabs a stroke lead over hometown player Settee Prakongvech after firing eight birdies for a 63 during the opening round of the US$500,000 Thailand Masters at the Phoenix Gold Golf and Country Club in Pattama.

Posted by The Nation Bangkok on Wednesday, December 18, 2019

“Thai food is the best in the world. I like chicken Pad Thai (Thai style fried noodles). I’m not a fan of spicy food, so anything that is not spicy here is really good,” added the Belgian young gun who plans to take a relaxed approach going into the next three rounds.

“I’ve been playing well, hitting the driver really well. It’s the key because the roughs are pretty tricky here. If I can hit the fairways and stay relaxed, it’s going to be a great week,” he added.

Settee, who has one All Thailand Golf Tour title in Chanthaburi this season, enjoyed home conditions to produce an error-free round.

“I need a top-three finish to keep my Asian Tour card. This is a good start for me. If I can create good approach shots, I should be able to enjoy a strong finish this week,” said the 25-year-old Thai.

Gunn, who just lost to Asian Tour No 1 Jazz Janewattananond last week in the Indonesian Masters, continued his impressive form by hitting a 65, two off the lead. He and wife Vichuda Weerajittaywin are expecting their first baby next month.

“I’m more nervous and more excited. But I’m also afraid that what I did to my parents would come back to me (laughing). But as I’m having a daughter soon, I’ve learned to be more patient. It’s going to be a new experience for me,” said Gunn, whose wife is supporting him this week.

Soon-to-be dad Gunn Charoenkul of Thailand cards a 65 to trail Belgian leader Thomas Detry by two strokes after round one of the US$500,000 Thailand Masters in Pattaya.

Posted by The Nation Bangkok on Thursday, December 19, 2019

A strong field will turn out this week. That includes Thai mega star Kiradech Aphibarnrat, who is back in action for the first time in a month after a knee injury.

“I decided to enter this tournament at the last minute, as I’ve been out of practice. But you cannot miss a good tournament like this, especially when it’s hosted by Thongchai. I just need to shake off the rust to create my chances this week,” said Kiradech, who has been working on his fitness and has shed 12 kilos.