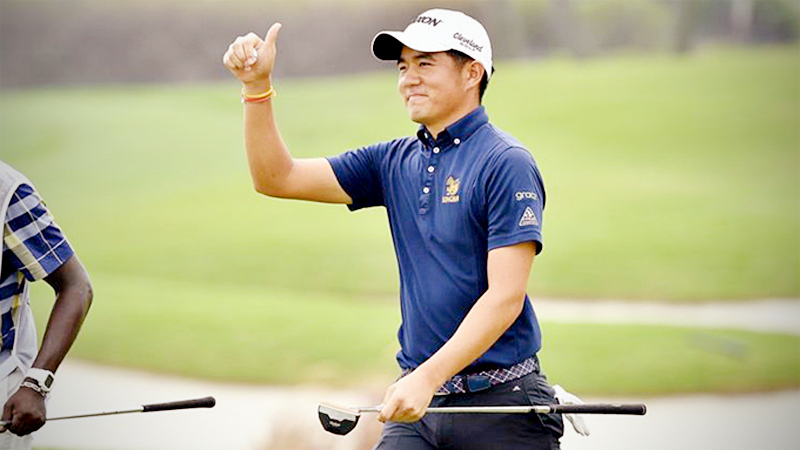 Thailand’s Kosuke Hamamoto showed he can be the man for the big occasion when he signed for an opening six-under-par 65 to take the first round clubhouse lead at the SMBC Singapore Open on Thursday.

Despite playing at the US$1 million Singapore showpiece for the first time, the 20-year-old  displayed maturity beyond his years as he outplayed several of the tournament’s marquee names that include former world number one Justin Rose of England, Sweden’s Henrik Stenson, American Matt Kuchar and 2019 Asian Tour Order of Merit champion, Jazz Janewattananond of Thailand.

Play was suspended for slightly more than an hour in the afternoon due thunderstorms at the Serapong Course, Sentosa Golf Club.

The first round subsequently could not be completed due to fading light in the evening, leaving 45 players having to resume their round at 7.40am on Friday morning.

Thailand’s Gunn Charoenkul showed his consistency yet again by signing for a 66 to trail Hamamoto by one shot in a share of second place that included Canada’s Richard T. Lee, Japan’s Rikuya Hoshino and American Matt Kuchar, who managed to complete his round in near darkness.

17-year-old Joohyung Kim of Korea, who is the youngest player in the field and making his SMBC Singapore Open debut, continued to show his potential as he posted a 67 to end his day in tied-sixth place alongside Korea’s Inhoi Hur and Jazz.

Jazz started his title defence with a promising 67 while Rose and Stenson are a further shot back from the defending champion in tied-ninth place after returning with matching 68s.