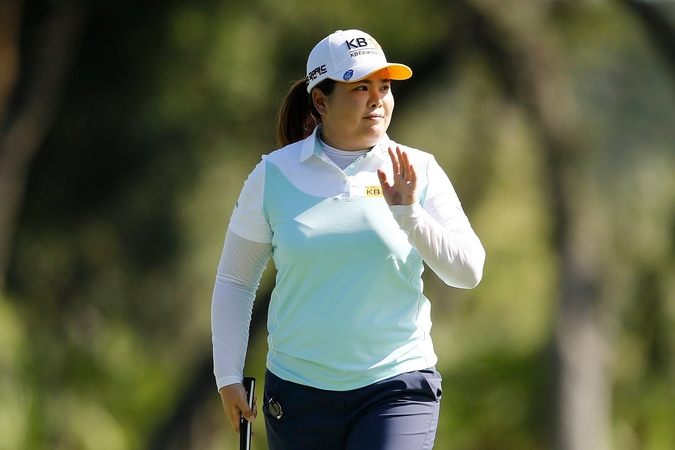 Inbee Park of South Korea reacts after a birdie on the 14th green during the first round of the Diamond Resorts Tournament of Champions at Tranquilo Golf Course at Four Seasons Golf and Sports Club Orlando on January 16, 2020 in Lake Buena Vista, Florida. (Photo by Michael Reaves/Getty Images)

A pair of major winners lead the field at -9 heading into the weekend at the 2020 Diamond Resorts Tournament of Champions presented by Insurance Office of America.

“It's a really nice way to start the year. I haven't made many mistakes on the golf course, and that's what I really look to do all year,” said Park. “Hopefully, I can keep that going for the next two days. Today was definitely a little bit tougher conditions with the wind. I hit a lot longer clubs and missed a few greens, but I was able to make some great up and downs.”

Gaby Lopez sits in solo third at -8 after a second-round 69, with Celine Boutier, Sei Young Kim and Nasa Hataoka tied for fourth at -7. First-round co-leader Danielle Kang was 2-under on her round after nine holes but closed with four bogeys on her back nine to fall to -6 and heads into the weekend in seventh.

After opening with a 3-over 74, defending champion Eun-Hee Ji rebounded with a 4-under 67 on Friday and heads into the weekend tied for 17th.

The celebrity portion of the competition has a three-way tie for the lead with defending champion John Smoltz, Chad Pfeifer and Mardy Fish all at +74. First-round leader Mark Mulder is fourth at +69, with Eric Gagne rounding out the top five at +67.

“I'm very confident. I've just got to see more putts go into the hole,” said Smoltz. “They're touching the hole. Every one of them is close, but if I keep putting like this, it's going to be really good.”

It was a colorful closing stretch for Brooke Henderson. After making a birdie at No. 16, the Canadian superstar nearly holed out for double eagle at the par-5 17th, hitting her 3-wood from 230 yards out. For a few moments, it looked like her ball would hit the cup at the Aon Risk Reward Challenge hole, but she instead settled for a 4-inch tap-in eagle.

“It was pretty downwind. I was kind of contemplating between 7 wood and 3 wood,” said Henderson, who was third on the LPGA Tour in eagles in 2019 with 16. “At the last second, it sort of switched to maybe a little bit more crosswinds, so we pulled the 3 wood, and I'm really glad I did. I hit it, and I thought I hit it pretty well. (Caddie and sister) Brit (Henderson) was telling it to sit down, so I'm not sure where it hit on the green there, but it was nice to walk up and have that short putt for eagle.”

A bogey at 18 for the second straight day put a slight damper on her round, but Henderson still sits atop the leaderboard heading into the weekend, tied with fellow major champion Inbee Park. Henderson comes into 2020 on a streak of four consecutive years with at last two victories, dating to 2016.

When Gaby Lopez started her second round in the Diamond Resorts Tournament of Champions, the winds were just beginning to make their presence known. As the day progressed, sustained winds of 10-20 mph gave way to gusts up to 28 mph.

“Today was really windy at the beginning, so I couldn’t play aggressive,” said Lopez, who carded a 1-over 35 on the front nine that included two bogeys. “I had to pick my target, and if I was in a fairway bunker, I had to just hit to the middle of the green. That’s some of the things I didn’t do. The conditions are going to determine how I play but going to be aggressive when I can.”

Sitting third at the halfway point, Lopez added that she “probably didn’t have the amount of weeks that I wanted to practice” before the season opener. Even so, the 2018 Blue Bay LPGA champion is drawing on positive memories from the 2019 TOTO Japan Classic, where she finished tied for sixth.

“I played very well in Japan last year, the second to last event,” Lopez said. “I’m kind of bringing those memories back to how I mentally play the game. That for sure has been helping me. Also, taking it easy. I know it is a long season and the more patient I stay, the better I play.”

Today’s round of 2-under 69 marked the 17th consecutive under-par round for 10-time LPGA Tour winner Sei Young Kim. The last time Kim recorded a round over par came on Oct. 17, 2019, when she shot a 1-over 73 in the first round of the Buick LPGA Shanghai.

“I'm very happy with that,” said Kim, who closed the 2019 season with a win at the CME Group Tour Championship. “Normally my play style is not consistent, very aggressive.”

Kim particularly enjoyed today’s walk around the course at Four Seasons Golf and Sports Club Orlando thanks to a fun grouping with Roger Clemens and Grant Hill. Kim is a third-degree black belt in taekwondo and she chatted with Hill about his daughter’s jiujitsu training. “He said his daughter keeps trying to fight somebody,” she said with a laugh.

Celine Boutier made the first hole-in-one of the 2020 LPGA Tour season, acing the 178-yard fifth hole with a 4-iron.

“Super happy, excited,” said Boutier, who became a Rolex First-Time Winner at the 2019 ISPS Handa Vic Open. “It's my second one, but my first one was like eight years ago, so it was definitely time for another one.”

For that ace, CME Group will donate $20,000 to St. Jude Children's Research Hospital, which is leading the way the world understands, treats and defeats childhood cancer and other life-threatening diseases. The 2019 LPGA Tour season saw 32 aces from 31 different players, which more than covers the average cost of $425,000 needed to treat a pediatric cancer patient.