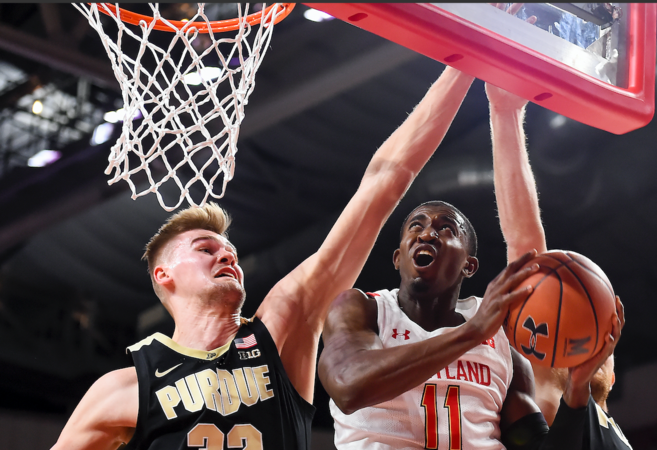 Maryland forward Darryl Morsell puts up a shot as Purdue's Matt Haarms defends during the first half of their game Saturday at Xfinity Center in College Park, Md. MUST CREDIT: Photo by Will Newton for The Washington Post

COLLEGE PARK, Md. - The tension around Maryland's basketball program had heightened in the wake of back-to-back road losses, one disappointing for how lopsided it was, the other for the team's failure to execute late. But as soon the Terrapins tipped off Saturday against visiting Purdue, a strong start quelled the concern and eventually helped them survive a second-half slump.

The No. 17 Terps didn't fall into a familiar early hole and halted a two-game losing streak with a 57-50 win against the Boilermakers. Even though Maryland led by 18 during its impressive first half, Purdue climbed back when Maryland's second-half shooting went cold. 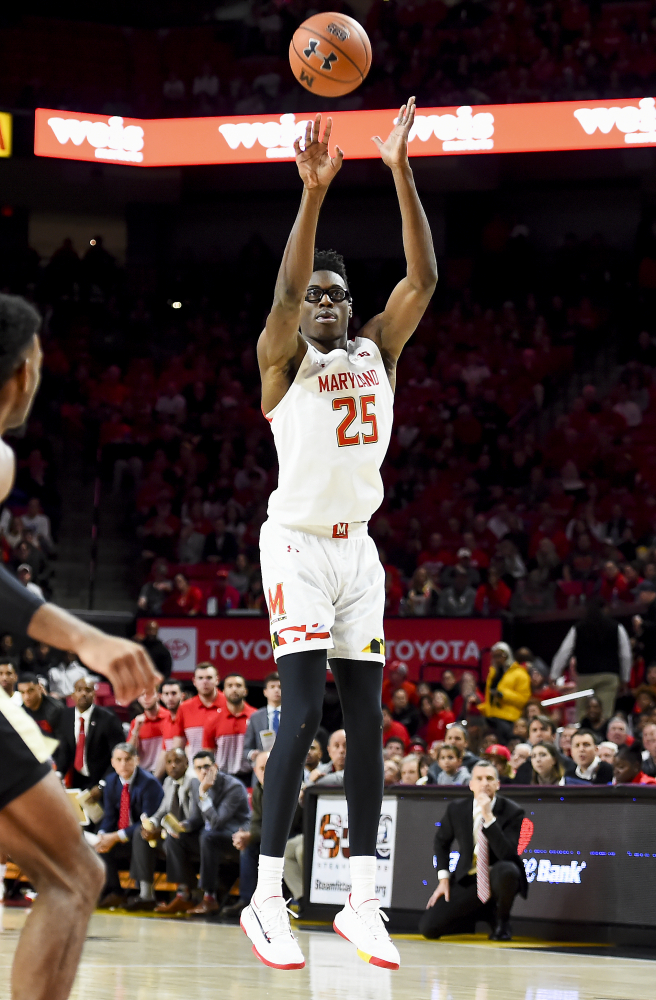 "We needed a win," Coach Mark Turgeon said. "Obviously, it's an understatement. ... Probably what we did the best is coming off a tough loss on the road, a game that we probably could have won but we didn't. Our guys responded, showed you a little bit about our guys, the way we came out, started the game and played terrific."

Defense has powered the Terps to wins in other games this season, and Saturday it helped them hang on after Purdue's late surge. With about four minutes to go, the Terps (14-4, 4-3 Big Ten), who led by double digits most of the game, saw their lead whittled to three. But Jalen Smith's thunderous dunk, followed by key defensive stops let the Xfinity Center crowd exhale one final time. Maryland held Purdue without a field goal in the final six minutes.

"We came out slow in the second half," Smith said. "Coach Turgeon reminded us at halftime to not do that and we just let it slip, but [we] recovered, tried to hold them off as best as we could."

The Terps leaped ahead of the Boilermakers (10-8, 3-4) with their best start of the season. Positive moments early in games have become a rarity for Turgeon's team. Maryland had been outscored in the opening five minutes in 13 of 17 games coming into Saturday. The Terps had a seven-point lead after five minutes against the Boilermakers and pushed it to 12 less than a minute later.

Maryland's typically strong defense held Purdue scoreless for more than four minutes to open the game while the offense moved the ball well, racking up seven assists on the team's first seven field goals. Eric Ayala, starting for his second straight game, hit a 3 early and his teammates followed suit. Smith, Scott and Aaron Wiggins each made a pair of 3s in the first half.

"It was just a big energy boost," Wiggins said. "We all continued to build off that. Having that lead makes us comfortable. ... Not having to fight to get back into the game or anything. That's always good for our team."

Wiggins' recent struggles led Turgeon to bring the sophomore off the bench in Maryland's previous game, at Wisconsin. Wiggins still played 34 minutes in that game, but Turgeon said he thought Wiggins seemed more comfortable in that role. So Wiggins again started the game on the bench Saturday and repeated his performance from earlier this week with another strong outing. He hit a 3-pointer immediately after entering the game and finished with 12 points - the second straight confidence-boosting game for a player fighting through a slump, particularly from 3-point range.

The Terps shot 7 of 15 from deep in the first half and took a 36-20 lead into halftime. They shot only 28 percent during the final 20 minutes and missed all nine 3-point attempts as Purdue pushed closer. Turgeon said his team became a bit stagnant in the second half, but Purdue is also the best defensive team Maryland has faced.

"Sometimes in the second half, when you can't figure out how to score, it snowballs," Turgeon said. "And that's what happened today."

Purdue cut Maryland's advantage to seven near the midpoint of the second half, forcing Turgeon to call a timeout. Maryland responded with a dunk from Wiggins, then a jumper from Smith with the shot clock running down. Smith then blocked Williams' attempt on Purdue's following possession.

The Boilermakers continued to hang around even after Scott tipped in Wiggins' miss to restore a double-digit lead with under seven minutes to go. Isaiah Thompson's 3-pointer trimmed the margin to five with under six minutes remaining, the smallest it had been since the opening minutes.

The Terps missed seven straight shots and then fouled Sasha Stefanovic on a 3-point attempt, and he made all three free throws to cut the lead to 53-50 with just under four minutes remaining. From there, Maryland's defense responded, and that early offensive burst gave the Terps a cushion they needed late.

"It's going to be an up-and-down season when you're in a great league," Turgeon said. "... What was important was how we responded when everybody [was] thinking the world's coming to an end."