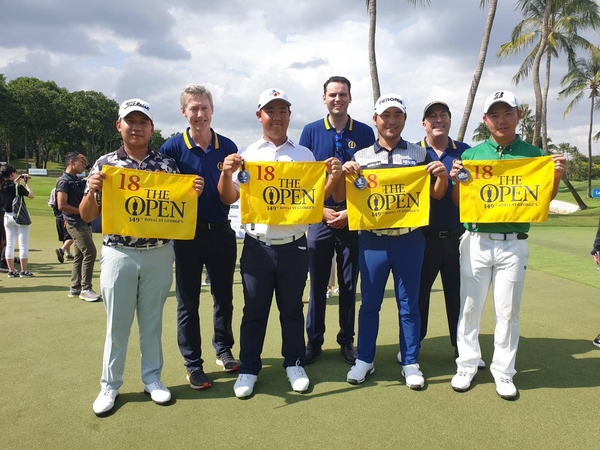 Three-time Asian Tour winner Poom Saksansin will make his debut in The Open after he secured a wildcard spot from the SMBC Singapore Open on Sunday.

Poom was among the four players (who are not eligible for The Open before the Singapore event) with the best results on Sunday after he signed off on 11 under-par-273 for tied sixth.

“I am happy I gave myself a chance to qualify for The Open. It’s going to be my first time playing in a Major tournament. I think it would be nice! I came into this week with no confidence because I have been trying to fix my swing in last three months,” said the 26-year-old Poom whose young look earned him the “Baby-faced Assassin” nickname.

“But this week, I played really well and I think I have regained the confidence with my swing. This is a long course for me. It doesn’t really suit my game. But the greens are nice here and I putted well. I am looking forward to the experience of playing in a Major already. It’s going to be the biggest stage that I have ever played so I am very excited,” added the Chanthaburi-based.

South Korean teenager Joohyung Kim signed for a 71 and a total 271 to take fourth place along with one of the four tickets to The Open at Royal St. George’s in July. The others were Canada’s Richard T. Lee and Japan’s Ryosuke Kinoshita.

American Matt Kuchar put up a inspirational performance that demonstrated his mental fortitude when he overcame a calamitous triple-bogey on the seventh hole by charging back with three birdies in his back-nine to win the Singapore Open trophy.

Despite a host of Asian Tour stars including defending champion and 2019 Asian Tour Order of Merit champion Jazz Janewattananond piling the pressure on him, Kuchar showed he has the resilience to bounce back on the day that matters most at the Serapong course, Sentosa Golf Club.

Holding a three-shot lead at the start of the day, Kuchar extended his lead to four with his first birdie on four. However, the American ran into trouble on the par-five seventh when his tee shot came up against the root of a tree and he missed the ball on his first attempt to punch it out from the trees.

The nightmare continued when his approach shot flew left of the green, hit a cart path and went out of bounds. After hitting his sixth shot onto the front of the green, Kuchar eventually managed to hole a crucial putt from 10-feet for a triple-bogey eight.

But Kuchar mounted his comeback in his back-nine with birdies on 11 and 16 as his closest rivals fell by the wayside. The galleries then roared in unison as he went on to sink a birdie putt from almost 20 feet to win the iconic Singapore event with a final round one-under-par 70.

Former world number one Justin Rose of England finished in second place after posting a four-day total of 15-under-par 269 while Jazz took outright third place with a closing 71 at the US$1 million event which is sanctioned by the Asian Tour and Japan Golf Tour Organisation (JGTO).