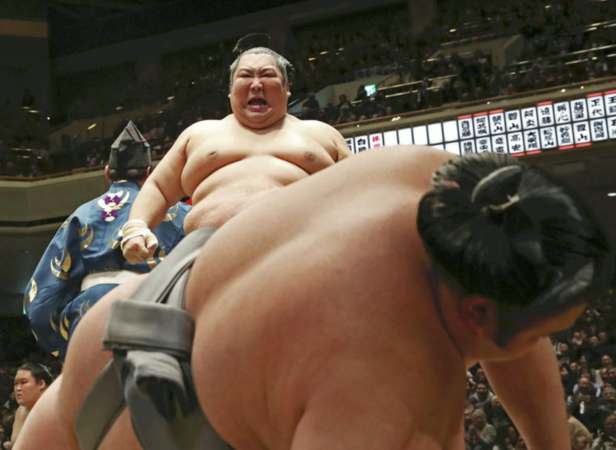 The Yomiuri Shimbun No. 17 maegashira Tokushoryu, top, stands over a defeated ozeki Takakeisho, a victory that gave him the title at the New Year Grand Tournament on Sunday in Tokyo.

In a Cinderella story that sumo had not seen in two decades, No. 17 maegashira Tokushoryu came from the bottom of the rankings to come away with an improbable victory at the New Year Grand Tournament on Sunday.

Tokushoryu kept his cool fighting in the final bout of the tournament and slammed down ozeki Takakeisho to win the title with a 14-1 record at Tokyo’s Ryogoku Kokugikan.

Tokushoryu, who ended Nara Prefecture’s 98-year wait for a second native son to win a sumo tournament, broke down in tears after the victory. It also marked the first time the lowest-ranked wrestler in the makuuchi division won the championship since No. 14 maegashira Takatoriki did it at the Spring tournament in 2000.

“As I am the lowest ranked, I had nothing to fear and just gave everything I could,” Tokushoryu said in a ringside interview after receiving his bevy of trophies.

In a tournament that saw the early withdrawal of both yokozuna, the title was certainly going to be up for grabs. But nobody could have foreseen this outcome. Tokushoryu became the 11th maegashira-ranked wrestler to win an Emperor’s Cup from the start of the Heisei Era (1989-2019).

At the age of 33 years 5 months, he becomes the third-oldest wrestler to win an inaugural title in sumo history, and the oldest native Japanese.

Tokushoryu’s lone loss came on the second day to No. 16 maegashira Kaisei, after which he reeled off 13 straight wins. He put himself into position to clinch the title on the final day when he broke a tie for the lead with No. 4 maegashira Shodai by beating him the previous day.

“No, I wasn’t thinking [about the championship],” Tokushoryu said, then added playfully, “no, that’s a lie, I was really thinking about it.”

Takakeisho, who had fallen out of the title chase on Saturday, could only play the role of spoiler. But against Tokushoryu, he found himself constantly on the defensive.

Tokushoryu forced him to the edge, but Takakeisho twisted out of the predicament. But a second charge moved the ozeki to the other end of the ring, where Tokushoryu drove him to the ground to put a definitive stamp on his unlikely title. A loss by Tokushoryu would have sent him into a playoff with Shodai, who earlier won his final bout to finish 13-2.

“I told myself that I had to be aggressive and that I need to make good initial contact,” he said.

Tokushoryu, who had never won any of the three post-tournament prizes in his career, walked off with two of them, the Outstanding Performance Award and the Fighting Spirit Prize. He shared the former with No. 1 maegashira Endo and the latter with title rival Shodai and fellow No. 17 maegashira Kiribayama.

Tokushoryu joined sumo in 2009 after graduating from Kindai University. During the New Year tournament, he was stung by the sad news that his college coach Katsuhito Ito had died, which served as incentive to put on the performance of his life.

“Coach did not just watch me, it was like he was in the ring fighting with me,” Tokushoryu said with tears in his eyes. “When my spirits were down, I would see his face. It motivated me to be able to give him good news.”

He had spent the previous three tournaments in the juryo division, and only squeezed into the lowest rung on the makuuchi division ladder by notching an 8-7 record in the Kyushu tournament in November.

Earlier, Shodai put the pressure on Tokushoryu by defeating No. 2 maegashira Mitakeumi for his 13th win. Shodai came out firing on all cylinders and quickly forced Mitakeumi to the edge. Mitakeumi tried in vain to step aside, but Shodai was having none of that, standing his ground and shoving Mitakeumi off the raised ring.

From there, all Shodai could do was wait to see if he would get a shot at the title in a playoff and a chance to avenge his 14th-day loss to Tokushoryu. It never came.

Ozeki Goeido, assured of demotion, finished up a disappointing tournament with a humiliating 10th loss to No. 7 maegashira Onosho. With both wrestlers securing belt holds, Goeido tried to hook his left leg around Onosho’s right. But that only gave Onosho the opening for a quick twisting throw that sent Goeido landing on the dirt with a thud.

Goeido’s ninth life with kadoban status proved to be his last. Needing eight wins to keep his ozeki rank, Goeido assured himself of a losing record — and demotion to sekiwake for the next tournament — when he suffered his eighth loss on the 12th day.

There will be an opening at sekiwake after Takayasu concluded his tournament with a 6-9 record, although he salvaged some pride by defeating No. 8 maegashira Aoiyama on the final day. Takayasu, demoted from ozeki, could have regained that rank by chalking up 10 wins, but instead finds himself headed in the opposite direction.

The other sekiwake, Asanoyama, capped an impressive debut at the third-highest rank by body-slamming No. 8 Ryuden to finish 10-5, a good start in a bid for future promotion to ozeki.

The most entertaining wrestler of the tournament, diminutive No. 5 maegashira Enho, finished 8-7 after a loss to No. 11 maegashira Kagayaki in which he was pushed out following a somewhat dubious jump-off.

Kagayaki seemed to stop initially, which would normally lead to a restart, but then suddenly resumed the fight, much to the surprise of Enho, who could offer little resistance at that point.

In a battle between wrestlers in line for hefty promotions, No. 9 maegashira Yutakayama dodged a charge by No. 2 maegashira Hokutofuji and sent him sailing out of the ring, a result that left both with 11-4 records. Despite the loss, Hokutofuji was awarded the Technique Prize.

Meanwhile, former ozeki Terunofuji, who had already clinched the juryo division title with two days to spare, finished up his tournament in the second tier with a second straight loss when he was forced out by No. 6 juryo Daiamami.

“I was aiming for 10 wins, but as I kept winning, I became aware [of the championship],” Terunofuji said. Asked about missing out on going undefeated, he replied. “I wanted to do it, but it’s not that easy.”

Terunofuji, fighting as a No. 13 juryo, has made a remarkable comeback after injuries and illness saw him drop from ozeki to as far as jonidan, the second-lowest of the six divisions. Whether his 13-2 record in juryo will be enough to propel him back to the makuuchi division remains to be seen.